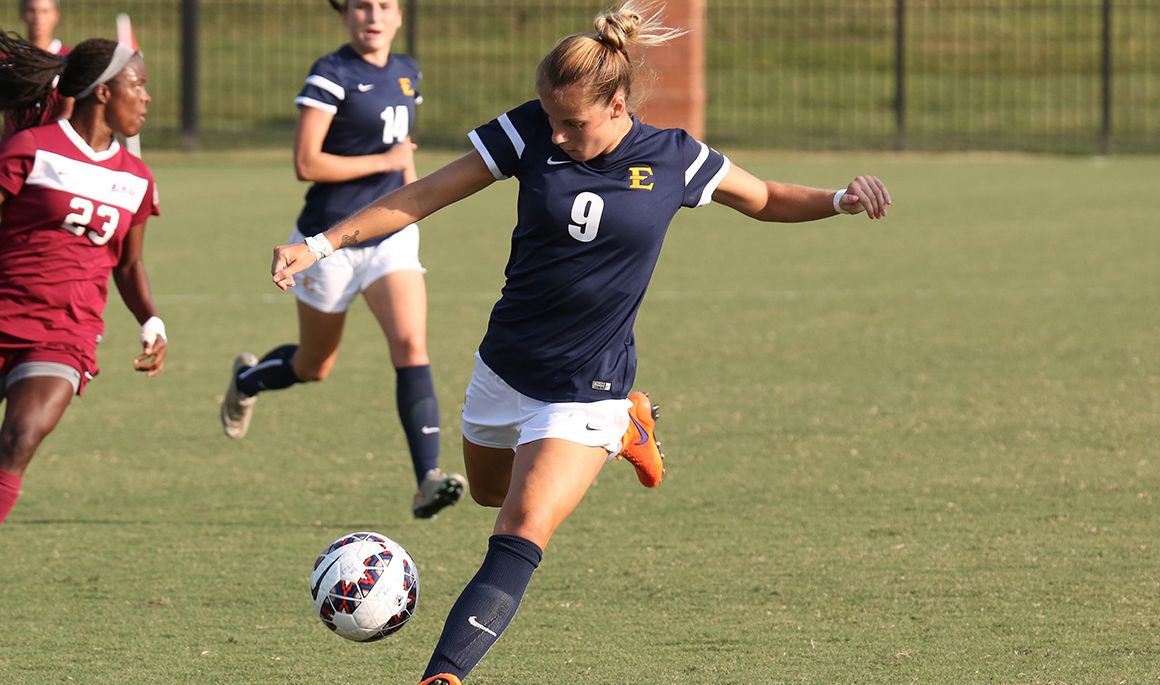 JOHNSON CITY, Tenn. (September 16, 2016) – With a 3-1 victory over Alabama A&M on Friday night the ETSU women’s soccer team improved their record to 4-0 inside Summers-Taylor stadium, the best start at home since 2014.

Right out of the gate the Bucs got on the board in the first minute of action thanks to senior Cecilia Re (Busnago, Italy) recording her second goal of the season. After Harbin outraced the Alabama A&M defenders the sophomore rocketed a shot that went off the right post. The ball then landed off the deflection of the post onto the foot of Re who blasted the ball into the top right corner of the net to give ETSU the early 1-0 lead.

It didn’t take long for the Buccaneers to strike once again as Vardali scored the first of her two goals on the night in the sixth minute. A turnover by the Bulldogs led to sophomore Isabel Hodgson (Addelaide, Australia) racing up the left side where she crossed it over to Harbin on the right side. The Arlington, Tenn., native proceeded to dump the ball off to Vardali who placed the ball in the back left corner of the net to extend the ETSU lead.

In the 29th minute Vardali was back at it again as she bended a ball from just outside the box into the top right corner of the net for her second goal of the evening. Senior Simona Koren (Graz, Austria) recorded her second assist of the season on the goal.

Alabama A&M did get on the board in the 23rd minute as junior forward Margret Sesay recorded her first goal of the season and the Bulldogs second goal of the 2016 campaign. The action slowed down in the second half as neither team was able to find the back of the net as ETSU clinched a 3-1 victory.

Overall the Bucs outshot the Bulldogs, 16-7 while recording eight shots on goal to A&M’s five. For the first time in her career sophomore LeaAnn Cutshall (Johnson City, Tenn.) got the start in the net and recorded three saves and allowing just one goal. It was the first goal allowed by ETSU this season inside Summers-Taylor stadium.

ETSU will now embark on a season-long four game road trip beginning on Sunday, Sept.18 when they travel to Orangeburg, S.C. to take on South Carolina State at 4:00 p.m. The Bucs begin Southern Conference play next Friday, Sept. 23 at The Citadel.