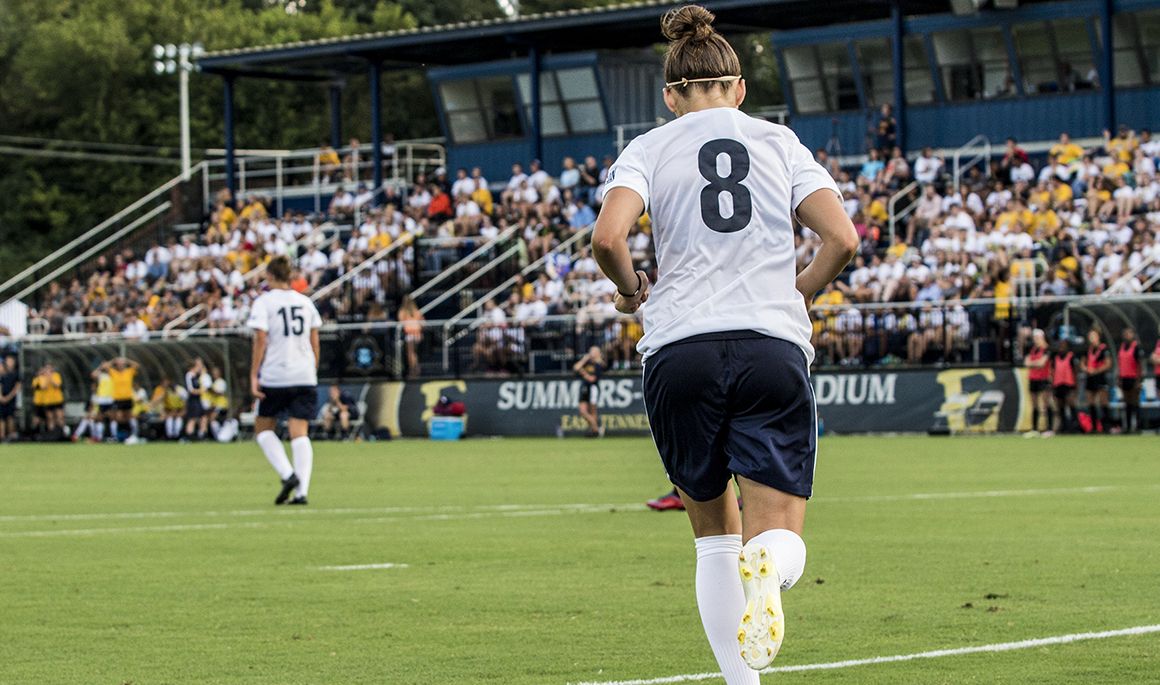 ORANGEBURG, S.C. (September 18, 2016) – Scoring six goals in the second half was the difference as the ETSU women’s soccer team clinched their first road victory of the season, 7-0 over South Carolina State on Sunday afternoon.

The six second half goals are the second most goals scored in a half in program history. ETSU outshot the Bulldogs, 22-8 including eight to one in the first half. Six different players scored for the Bucs with senior Simona Koren (Graz, Austria) leading the way with two goals. The Bucs improve their overall record to 5-3-1.

It all got started for the Bucs when sophomore Isabel Hodgson (Adelaide, Australia) recorded her first collegiate goal in the 20th minute. Sophomore Emily McKerlie (Dumfries, Scotland) dropped the ball off to Hodgson on the left side and the sophomore defender put the ball in the back of the net to give ETSU the early 1-0 lead.

That was it for the Bucs in the first half as they led 1-0 at halftime while outshooting the Bulldogs eight to one.

Right out of the gate to start the second half the Bucs got on the board as sophomore Rachel Harbin (Arlington, Tenn.) scored her first goal of the season in the 49th minute. Harbin found the ball five yards out in the center of the box to extend the lead. Fellow sophomore Pauline Vienne (Lausanne, Switzerland) had the assist.

Six minutes later the blue and gold were on the board again as senior Molly Collinson (Cramlington, England) found the back of the net with the assist from sophomore Emily McKerlie (Dumfries, Scotland).

ETSU was able to pour it on in the final 10 minutes as the Bucs scored four goals with one goal coming with two seconds left in the contest. Sophomore Eleonora Goldoni (Ferrara, Italy) registered her team leading fifth goal of the 2016 campaign in the 78th minute. Off a corner kick, Goldoni was able to come racing in to get the goal to extend the ETSU lead to 4-0.

Two minutes later, Koren scored the first of her two goals on the night in the 80th minute. Off an assist from Goldoni, Koren was able to record her third goal of the season. Koren also grabbed a goal with two seconds left in the contest to give ETSU the commanding 7-0 victory. Senior Thomai Vardali (Koufalia, Greece) also collected her third goal of the season in the 86th minute.

Offensively the Bucs shined in the win over the Bulldogs outshooting South Carolina State, 22-8 and 13 to 4 in shots on goal. Six different players scored a goal while five different ETSU players had assists. McKerlie and Hodgson each had their first collegiate multi-assist performance.

Senior goalkeeper Jasmine Elliott (Preston, England) got the start in-between the pipes and recorded her fourth shutout this season making just four saves on the afternoon. Elliott is just two shutouts away from owning ETSU’s single-season shutout record. As a team, the Bucs are three shutouts away from holding the single-season team record for shutouts.

ETSU continues their season long four game road trip on Friday as they open up Southern Conference play against The Citadel on September, Friday 23. Match is set for 3:00 p.m.