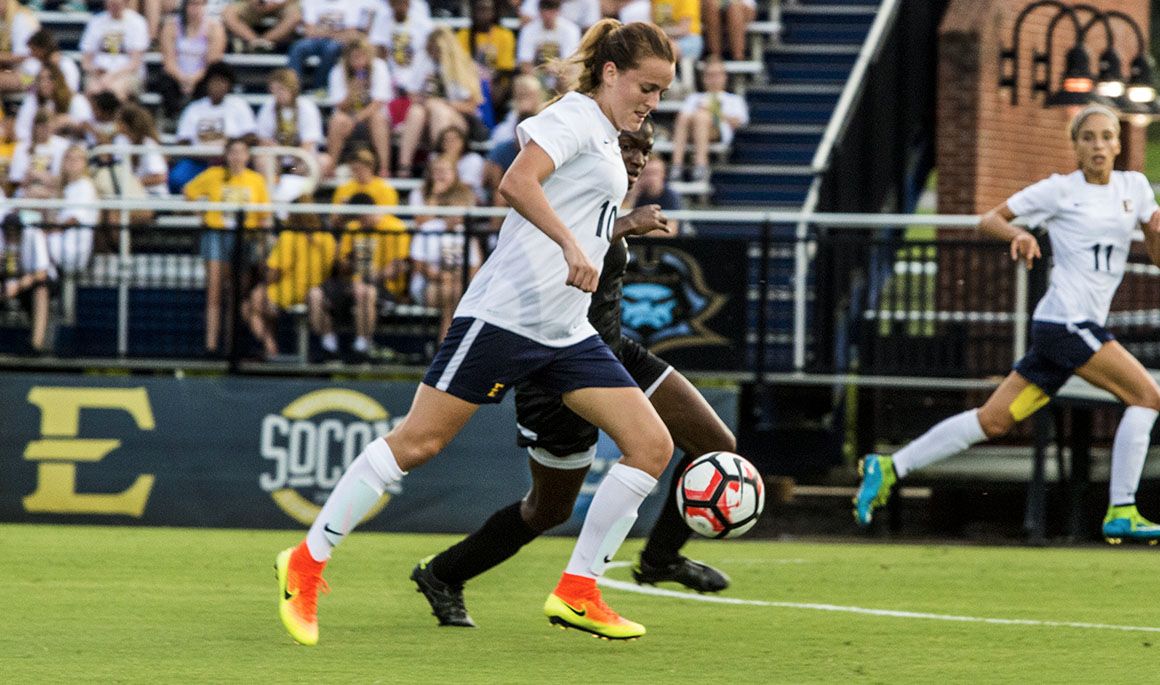 Hodgson recorded a goal and an assist on a career-high four shots at The Citadel
Bucs cruise to 4-1 victory in SoCon opener over The Citadel
ETSU at The Citadel | September 23, 2016
Related Links

ETSU scored three second half goals in the win

CHARLESTON, S.C. (September 23, 2016) – In their Southern Conference opener on Friday, the ETSU women’s soccer team cruised to a 4-1 victory over The Citadel extending their winning streak to three.

The Buccaneers had four different goal scorers on the afternoon while outshooting the Bulldogs, 20-12. Senior Jasmine Elliott (Preston, England) tallied seven saves while sophomore Isabel Hodgson (Adelaide, Australia) recorded a career-high four shots with a goal and an assist.

Head coach Adam Sayers re-wrote the ETSU record book in the victory, becoming the fastest coach in program history to 60 wins, doing so in just 101 games. The blue and gold extended their season-long winning streak to three games while improving their overall record to 6-3-1.

"The players were fantastic today, every one of them. It was a difficult place to come and get a result as The Citadel is organized, disciplined, hard-working and tough to play against," said head coach Adam Sayers. "W knew patience and composure were important factors today."

ETSU got on the board first for the seventh time this season as senior Simona Koren (Graz, Austria) netted her fifth goal of the year in the 37th minute. After a cross by sophomore Emily McKerlie (Dumfries, Scotland) to Isabel Hodgson, the Adelaide, Austrailia native slid the ball to Koren who blasted a shot into the right corner of the net to give ETSU a 1-0 lead.

Early in the second half the Bucs were back on the board once again thanks to Hodgson who recorded her second goal of the season in the 50th minute. After a Citadel turnover, sophomore Irina Brutsch (Zurich, Switzerland) raced up the left side and crossed it into the box finding a diving Hodgson for the goal.

"The first goal was going to be key and it put us in a good position," said Sayers. "We created a few good chances prior to the first goal and we started the second half strong, as we have done many times this season. The two early goals in the second half gave us the breathing space we sought."

Five minutes later it was Brutsch who outran the entire Bulldog defense to grab her second goal of the season. In the 55th minute off of a corner kick by The Citadel the Zurich, Switzerland native intercepted the ball and went coast-to-coast down the field to give ETSU a 3-0 lead.

The Citadel broke up the shutout bid in the 79th minute as forward Samara Nche scored her second goal of the season to cut into the ETSU lead.

Sophomore Eleonora Goldoni (Ferrara, Italy) added to her team-lead in goals as she netted her sixth of the season in the 79th minute. A foul in the box by the Bulldogs led to Goldoni with a penalty kick opportunity in which she capitalized on for the third time this season to give ETSU the 4-1 advantage.

"Overall I couldn't be proder of the group as everyone was great today," said Sayers. "We played very well, defended stoutly and scored some lovely goals. Now we'll recover as best we can prior to Sunday's game."

Overall the Bucs improve to 6-1 in conference openers since 2010 and also increase their record to 5-2 since 2010 in their first conference road game. It is also the third time this season the Bucs have scored three or more goals in a half.

ETSU continues SoCon road play as they head to Macon, Ga. for a showdown with the Mercer Bears on Sunday, Sept. 25. Match is set for 2:00 p.m.