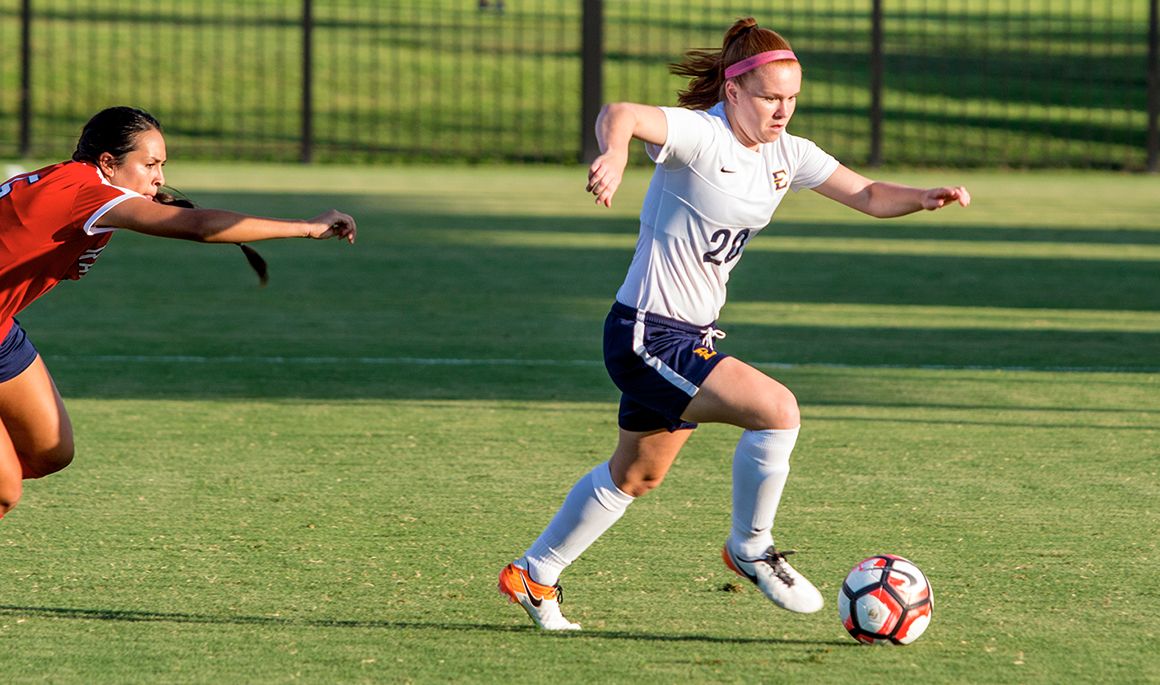 MACON, Ga. (September 25, 2016) – Despite recording two second half goals and nearly doubling the shots of the Mercer Bears, the ETSU women’s soccer team was unable to record the victory as they fell 3-2 on Sunday afternoon.

ETSU outshot Mercer, 20-11 with 10 of the 18 shots for the Bucs being on goal. Sophomore Eleonora Goldoni (Ferrara, Italy) and freshman Georgia Allen (Suffolk, England) each recorded four shots with Goldoni registering a goal while Allen recorded an assist. For Mercer, forward Maddie Clark recorded all three goals for the Bears including the game-winning goal in the 82nd minute.

Through the first 45 minutes of the first half, the Buccaneers dominated on the offensive side of the ball outshooting the Bears 9-3 and four to one on shots on goal. However, Mercer was able to break through in the 40th minute thanks to Maddie Clark recorded her fifth goal of the season.

After a scramble in the ETSU box, the Bears were able to get off three consecutive shots before the ball bounced to the left side off a rebound where Clark put the ball in the back of the net to give Mercer the 1-0 lead at halftime.

ETSU struck quickly to begin the second half as sophomore Eleonora Goldoni (Ferrara, Italy) notched her seventh goal of the season in the 46th minute. Coming out of halftime, ETSU was able to gain possession in the Mercer zone thanks to sophomore Irina Brutsch (Zurich, Switzerland) racing up the left side.

Brutsch then dropped the ball off to sophomore Georgia Allen (Suffolk, England) who rocketed off her fourth shot of the day that was saved but got bounced off of the crossbar. Off the crossbar, Goldoni raced into the box and just snuck the ball under the left side of the goalkeeper to knot the game up at 1-1.

The Bucs went ahead on the scoreboard in the 69th minute thanks to senior Molly Collinson (Cramlington, England). Collinson dribbled the ball all the way up the right side of the field weaving her way through the Mercer defense. In a one-on-one opportunity, Collinson moved from right to left past the Mercer defender and blasted a shot from just outside the box that found the upper left corner of the net to give ETSU the 2-1 lead. It is Collinson’s third goal of the season.

A few minutes later the Bears netted the equalizer as Maddie Clark recorded her second goal of the afternoon in the 75th minute. Clark was able to get free just outside the box and get the ball onto her right foot where she got a shot off that went into the top left corner of the net and just pass the outstretched arms of senior goalkeeper Jasmine Elliott (Preston, England).

Clark netted her third goal of the match and seventh of the season just a few minutes later in the 82nd minute. After a shot by Jamilah Tejan was saved by Elliott, Clark was there for the rebound on the left side and put the ball into right corner of the net for the game-winning goal to give Mercer the 3-2 victory.

The defeat snaps the blue and gold’s three-game winning streak and brings their overall record of 6-4-1 and 1-1-0 in the Southern Conference. ETSU will continue SoCon play next week when they head to Cullowhee, N.C. to take on Western Carolina on Friday, Sept.30.