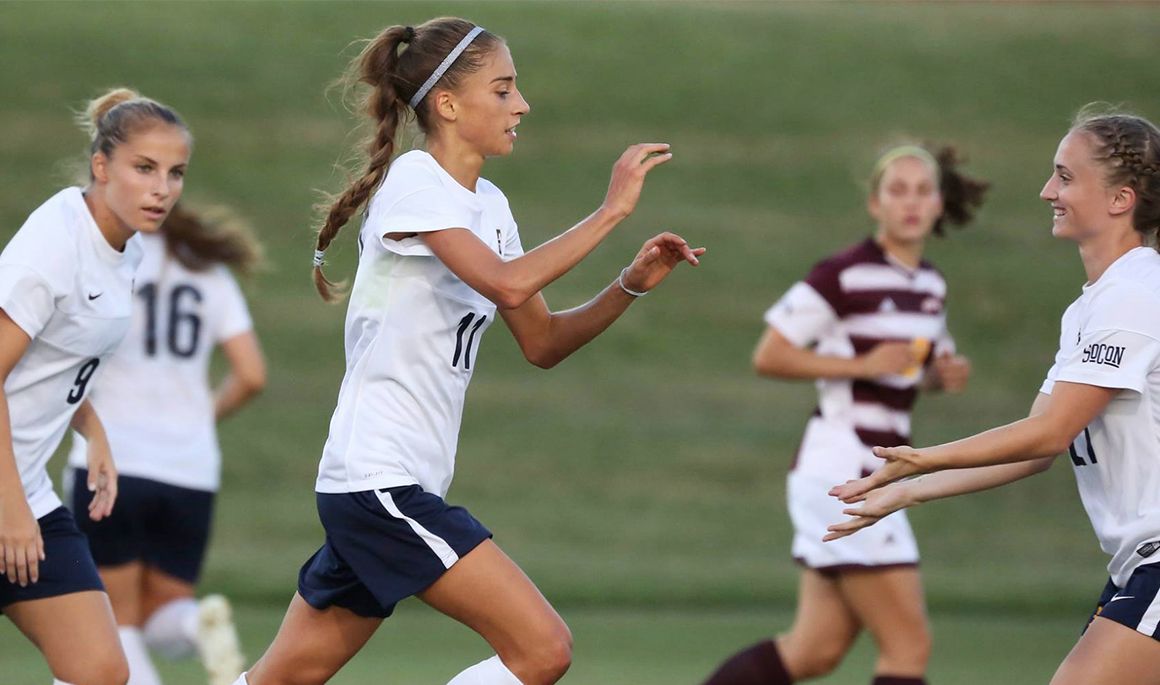 It was Goldoni’s third multi-goal game this season

CULLOWHEE, N.C. (September 30, 2016) – Two goals in the second half along with a game-winning goal by sophomore Eleonora Goldoni (Ferrara, Italy) in the 83rd minute gave ETSU women’s soccer a 3-2 victory over Western Carolina on Friday night in Cullowhee, N.C.

ETSU improves its overall record to 7-4-1 and 2-1 in Southern Conference play as Goldoni recorded her third career multi-goal performance with a goal in the 34th minute followed by the game-winning goal in the 83rd minute.

On the night the Buccaneers registered 14 shots, 11 of which were on goal compared to the Catamounts seven shots with four being on goal.

"I couldn't be prouder of the players tonight. They were magnificent from start to finish," said head coach Adam Sayers. "Western Carolina is a good, organized well coached team as they have strong attacking players and an excellent goalkeeper."

After the Catamounts registered the first two shots of the game the Bucs rattled off four straight shots which ultimately led to a goal by Goldoni in the 34th minute. Sophomore defender Fiona Dodge (Pontypool, Wales) led fellow sophomore Rachel Harbin (Arlington, Tenn.) up the right side who then crossed it into the middle of the box.

Harbin’s cross landed on the head of sophomore Isabel Hodgson (Adelaide, Australia) who popped the ball into the air where Goldoni let the ball bounce in front before heading it in for her eighth goal of the season.

Western Carolina got on the board five minutes later as Emily Threatt recorded her second goal of the season off of a shot from near midfield. The Bucs and Catamounts were tied 1-1 at halftime.

The Catamounts got on the board first to start the second half as Sayres McKenna grabbed her third goal of the season to give Western Carolina an early 2-1 lead in the 65th minute.

It didn’t take long for ETSU to respond as Brutsch registered her third goal of the season in the 68th minute. Senior Molly Collinson (Cramlington, England) was able to race up the right side weaving through defenders where she dropped it off to Brutsch. Brustch proceeded to get the ball on her left foot near midfield and blast a shot that went past the diving goalkeeper into the top right corner of the net.

As time was winding down, the blue and gold were able to get the game-winner as Goldoni recorded her second goal of the night. Freshman Georgia Allen (Suffolk, England) struck a shot that rattled off the crossbar and into the sights of Goldoni who came flying in all alone to head it in for the game-winner in the 83rd minute. It was Goldoni’s second game-winning goal this season and gave ETSU the 3-2 victory.

"We discussed prior to the game the importance of our mental approach to the game and our management of the game and the players carried it out perfectly," said Sayers. "We created several chances, scored some brilliant goals and defended well."

"The character we showed in coming from 2-1 down to win was huge and it's important we maintain the fight, heart and mental strenght in the upcoming games," said Sayers. "Full credit to the players for an excellent peformance."

ETSU will take advantage of a full week off before taking on UNC-Greensboro on Friday, Oct.7 in their SoCon home opener. Match is set for 7:00 p.m.