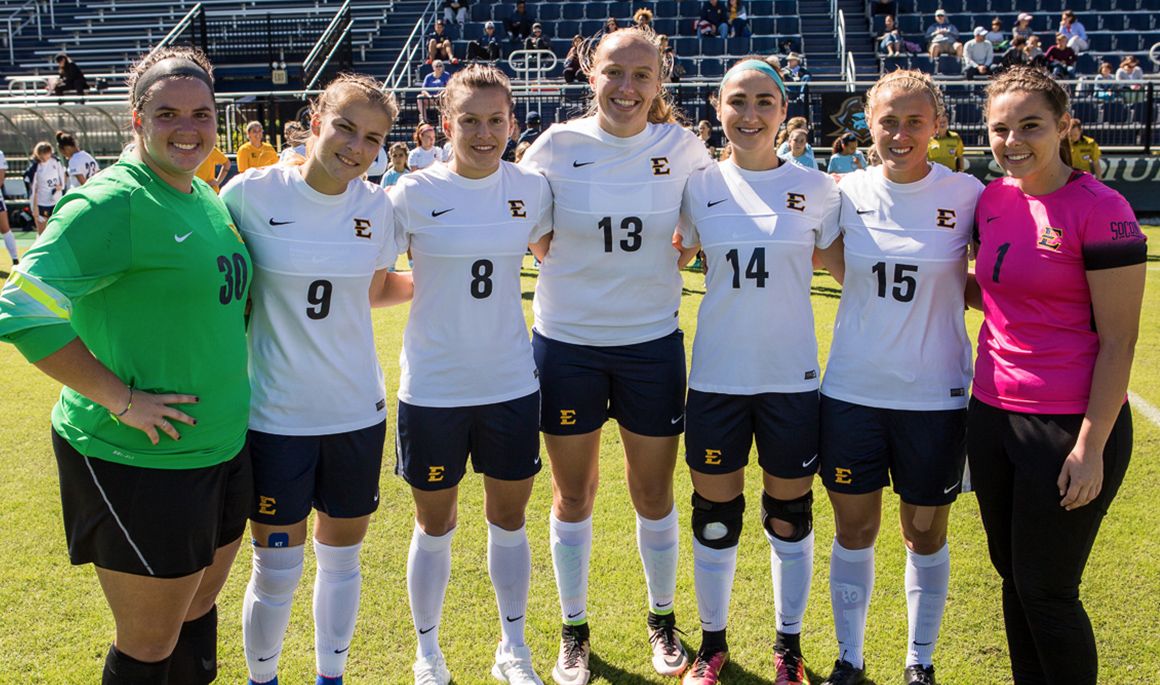 JOHNSON CITY, Tenn.  (October 9, 2016) – On a brisk Sunday afternoon on Senior Day the ETSU women’s soccer team recorded their sixth shutout of the season as they defeated VMI, 3-0 inside Summers-Taylor Stadium.

ETSU recorded its fifth shutout at home this season, tying the school record for most shutouts at home in a single season. The blue and gold remain perfect at home at 6-0 and have allowed just one goal. Overall ETSU moves to 9-4-1 and 4-1 in the Southern Conference having won seven of their last nine contests.

For the 10th time during the 2016-17 campaign, ETSU was able to get on the board first as Collinson headed in her fourth goal of the season in the 31st minute. A turnover by VMI led to sophomore Michaela Daniels (Charlotte, N.C.) possessing the ball up the right side. Daniels proceeded to weave through defenders and cross it into the box where she found the streaking Collinson on the left post. Collinson headed the back towards the right post and into the back of the net to give ETSU an early 1-0 lead.

That was all of the scoring in the first half as ETSU outshot VMI, 8-3 and 4-3 in shots on goal.

After 42 minutes of scoreless play the Bucs once again lit up the scoreboard thanks to Goldoni striking her 11th goal of the season in the 75th minute. The blue and gold were rewarded a penalty kick after a VMI handball and Goldoni struck the ball perfectly into the back right corner of the net to give ETSU a 2-0 lead.

It was Goldoni’s fourth penalty kick goal of the season and becomes the first ETSU player since 2014 to recorded double-digit goals.

Ending the afternoon was Vardali who logged her fourth goal of the season in the 87th minute. Sophomore Isabel Hodgson (Adelaide, Australia) showed off her speed and raced past the VMI defense and dropped the ball off to Vardali at the top of the box. Vardali ensued to rocket off a shot that found the top right corner of the net to secure the 3-0 victory for the Bucs.

ETSU plays their final two SoCon road games next weekend when they take on Chattanooga on Friday, Oct.14 followed by Samford on Sunday, Oct. 16.