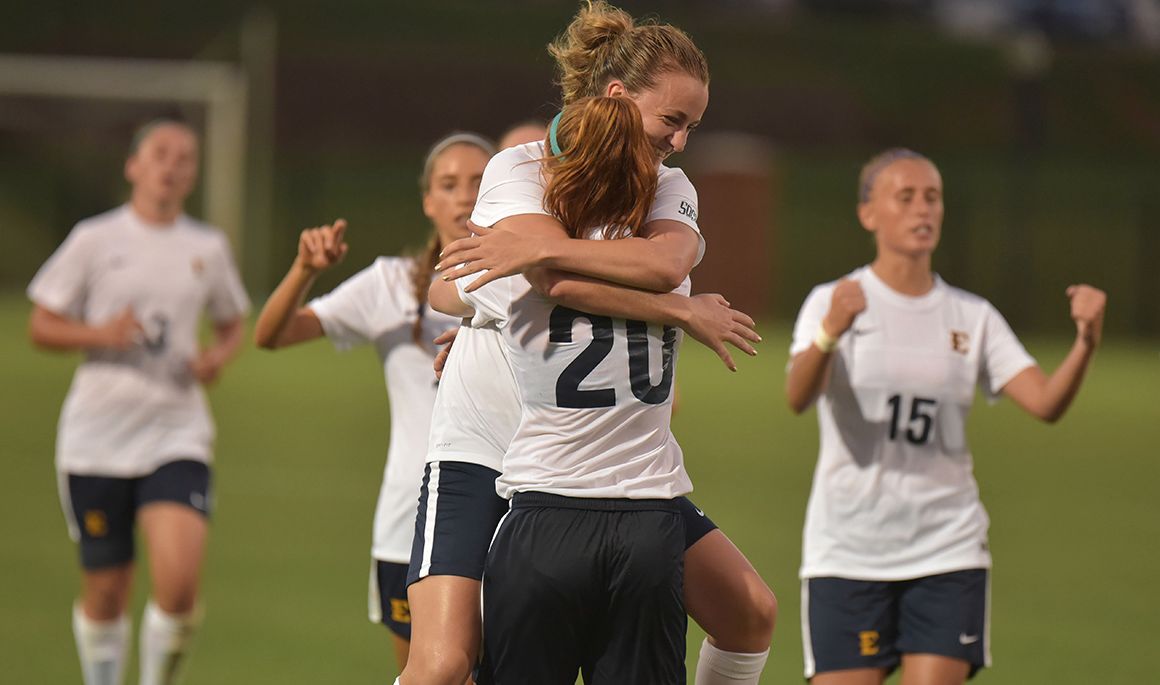 CHATTANOOGA, Tenn.  (October 14, 2016) – On Friday night at Finley Field in Chattanooga, the ETSU women’s soccer team rallied in the second half, scoring two goals to earn a 2-2 draw versus Chattanooga.

The Bucs outshot the Mocs, 15-12 including 5-0 in the two overtimes.  With a goal in the 58th minute, sophomore Eleonora Goldoni (Ferrara, Italy) has now recorded a goal in seven straight games and eight straight Southern Conference games. Freshman Georgia Allen (Suffolk, England) netted the equalizer for her second goal of the year in the 66th minute.

ETSU allowed their first goal in last 107:16 as Chattanooga’s Jordan Mueller recorded the first of her two goals in the seventh minute to give the Mocs an early 1-0 lead. Chattanooga was able to take their lead into halftime despite ETSU outshooting UTC, 6-5. It was the first time the Bucs have trailed going into the half since Sept.25 at Mercer.

It didn’t start off great for the Bucs in the second half as just three minutes in the Mocs were able to take a 2-0 lead. Off a corner kick from the left side, McKenzie Gregg found Mueller near the far right post where she headed it into the back left corner of the net to extend Chattanooga’s lead.

ETSU was able to respond in the 58th minute as Goldoni netted her 12th goal of the season, ranking second in a single-season in ETSU history for goals scored. After a turnover by Chattanooga, the ball was deflected off a UTC defender and started rolling slowly towards the net.

Goldoni along with UTC goalkeeper Melia Correa came rushing in with Goldoni being able to pop the ball up just in time as both players collided. Goldoni was able to get up and put the ball into the empty net to cut into the Chattanooga lead.

Eight minutes later the Bucs were back at it again as Georgia Allen registered her second goal of the season in the 66th minute. Sophomore Irina Brutsch (Zurich, Switzerland) dropped the ball off to fellow sophomore Isabel Hodgson (Adelaide, Australia) who struck a beautiful cross into the box. The cross found Allen who streaked past the UTC defender and struck the ball into the back right corner of the net to tie the game at 2-2.

From that point on neither team was able to muster up any scoring opportunities as the Bucs and Mocs headed to overtime for the first time since 2003.

In the overtimes it was all ETSU as the Bucs outshot the Mocs, 5-0.  ETSU’s best chance came in the second overtime as sophomore Emily McKerlie (Dumfries, Scotland) executed a cross into the middle of the box. The cross found Goldoni who just missed out on the game-winning goal, heading the ball over the crossbar and out of play.

With the 2-2 draw, the Bucs move their record to 9-4-2 and 4-1-1 in SoCon play. ETSU has picked up at least one point in four straight contests.

ETSU will play their final road game of the regular season on Sunday as they head to Birmingham, Ala. to take on the Bulldogs of Samford. Match is set for 3:00 p.m.