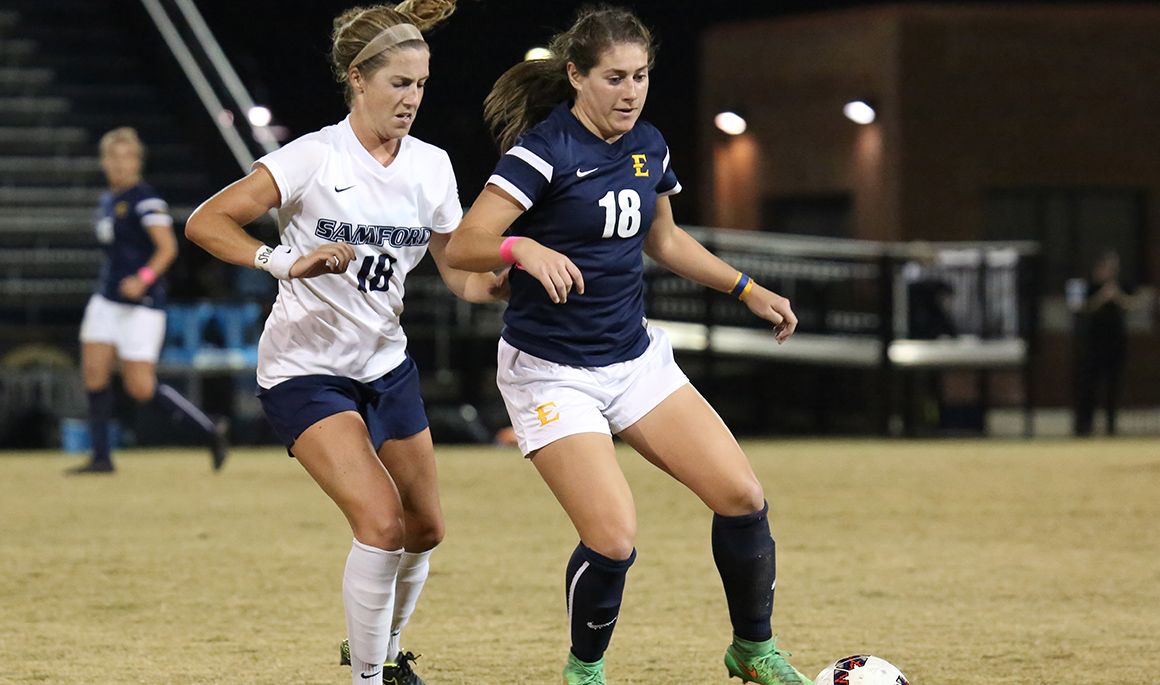 BIRMINGHAM, Ala. (October 16 2016) – For just the second time this season the ETSU women’s soccer team was held scoreless as the Buccaneers fell to Samford, 3-0 on Sunday afternoon inside Samford Track & Soccer Stadium.

Despite ETSU being outshot, 13-10 the Buccaneers had eight shots on goal compared to Samford’s six. Sophomore goalkeeper LeaAnn Cutshall (Johnson City, Tenn.) tied a career-high with three saves while the Samford goalkeeper duo of Katie Peters and Anna Maddox combined for eight saves.

Samford struck once again in the 36th minute as Sara Smeltzer recorded her third goal of the season with an assist from Korrie Sauder and Emily Jones to give the Bulldogs a 2-0 lead heading into halftime.

In the second half ETSU was able to get off the first shot of the second half in the 49th minute off the foot of sophomore Eleonora Goldoni (Ferrara, Italy). After a high and long through pass from sophomore Emily McKerlie (Dumfries, Scotland) Goldoni outran three Samford to get a shot off that went right into the Samford goalkeeper’s hands.

Samford extended their lead to 3-0 in the second half as Malcanisha Kelley headed home her fifth goal of the season in the 53th minute. Ella Baggett and Kaitlyn Orman recorded assists on the play.

The best chance for the Bucs in the second half came in the 78th minute with senior Molly Collinson (Cramlington, England) and Georgia Allen streaking down the field. Allen who led the Bucs with four shots on the afternoon, rocketed a shot at the goal from the middle of the box where Samford goalkeeper Katie Peters made a fingertip catch to preserve the shutout.

In the 85th minute the Bucs had yet another chance as sophomore Irina Brutsch (Zurich, Switzerland) was alone with the goalkeeper on the left side and tried to cross it back towards the middle. The ball was deflected away by the Samford defense and on to the foot of sophomore Rachel Harbin (Arlington, Tenn.) who struck back-to-back shots, each of which were blocked by the Samford defense.

Allen led the Bucs with four shots, all four of which were on goal. Goldoni was second on the team in shots with two and the shutout ended her consecutive goals streak at seven and consecutive goals in SoCon contests at eight. In between the pipes sophomore LeaAnn Cutshall (Johnson City, Tenn.) tied a career-high with three saves.

The defeat dropped ETSU to 9-5-2 and 4-2-1 in the Southern Conference and snapped it’s four-game streak of recording at least one point. It’s the blue and gold’s first loss since Sept.25 at Mercer.

ETSU returns home next weekend for the final two games of the regular season as they host Wofford on Friday, Oct. 21 and Furman on Sunday, Oct. 23. During the 2016 campaign, ETSU women’s soccer is 6-0 at home.