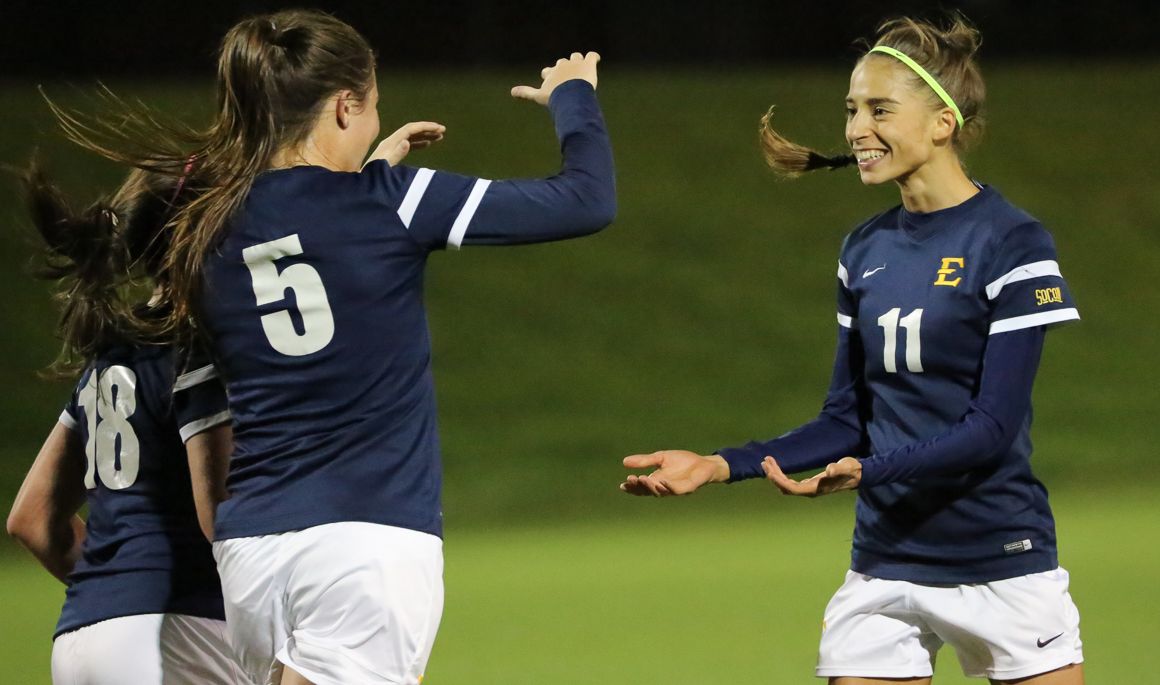 ETSU hosts Furman in the regular season finale on Sunday, Oct.23 at 2:00 p.m.

JOHNSON CITY, Tenn. (October 21, 2016) – ETSU women’s soccer for the fourth time in the last six seasons clinched double-digit victories on the season as the Buccaneers defeated Wofford, 4-0 on Friday night inside Summers-Taylor Stadium.

With the victory ETSU recorded their seventh shutout of the season and sixth shutout inside Summers-Taylor Stadium, tying the school record for most shutouts at home in a season. The seven shutouts during the 2016-17 campaign, ties the school record for most shutouts in a season, breaking the record set back in 2010.  ETSU is a perfect 7-0 at home and hasn’t allowed a goal in Johnson City since September 16. The Bucs improved their overall record to 10-5-2 and 5-2-1 in Southern Conference play.

“Absolutely thrilled with all of the players tonight as the girls executed the gameplan absolutely perfect,” said head coach Adam Sayers. “It was important for us to start strong and then we played well throughout the game.”

The 4-0 victory on Friday night prompted the fourth multi-goal performance of the season for sophomore Eleonora Goldoni (Ferrara, Italy) who scored in the 18th and 35th minute. Goldoni moves solely into second place on the single-season goal scored list at ETSU with 14. The Ferrara, Italy native scored two goals on a career-high seven shots.

Overall, the blue and gold outshot Wofford 22-6 including 13-3 in the second half alone. Sophomore goalkeeper LeaAnn Cutshall (Johnson City, Tenn.) made three saves on the night to record the second shutout of her career.

“Momentum is important and when the momentum swings against you it is important to work together to swing it back in our favor and that is what we did tonight,” said Sayers.

Senior Molly Collinson (Cramlington, England) got the Bucs on the board quickly in the third minute. After a pass from the left side by sophomore Isabel Hodgson (Adelaide, Austrailia) , Collinson weaved through two Wofford defenders and had a 1-on-1 opportunity with the goalkeeper. Collinson recorded her fifth goal of the season as she weaved past the Wofford goalkeeper and placed the ball into the back of the net.

Goldoni recorded the second and third goals of the first half for the Buccaneers in the 18th and 35th minute. Sophomore Emily McKerlie (Dumfries, Scotland) off a free kick put the ball on goal where after a save by the Terrier goalkeeper, Goldoni came racing in off the rebound to give ETSU a 2-0 lead.

In the 34th minute, sophomore Rachel Harbin (Arlington, Tenn.) was pulled down in the box on the left side prompting an ETSU penalty kick. Goldoni then proceeded to strike her fifth penalty kick goal of the season to give the Bucs a commanding 3-0 lead at halftime.

It was more of the same in the second half as freshman Elena Pisani (Milano, Italy) recorded her first collegiate goal in the 65th minute to give ETSU a 4-0 lead. Harbin was able to race up the right side of the field and drop it off to Pisani in the box. Pisani was then able to blast the ball into the back right corner of the net, extending ETSU’s lead.