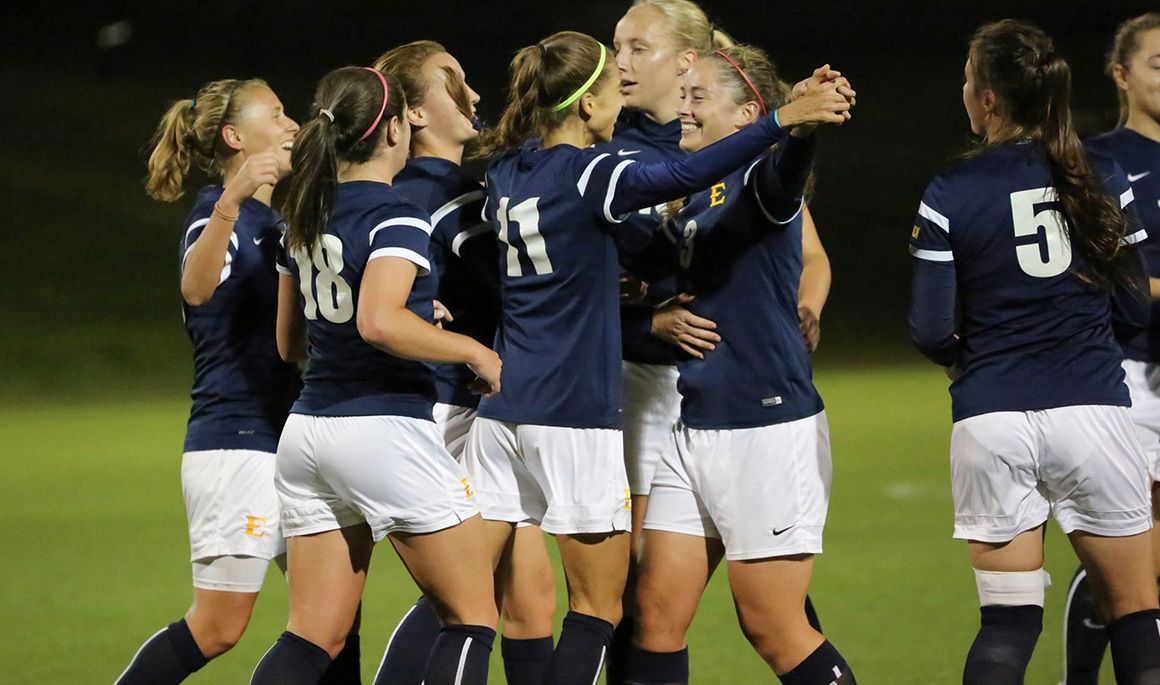 JOHNSON CITY, Tenn. (October 23, 2016) – In the regular season finale on Sunday, the ETSU women’s soccer team picked up the program’s first victory over Furman, 2-0 to clinch the No.2 seed in the 2016 Southern Conference Tournament.

“Very happy and very proud of the players, they were excellent from start to finish,” said head coach Adam Sayers. “We knew it was going to be extremely difficult but the players were up for it. We had a specific game plan and they executed it perfect from the very first minute.”

“We have been great at home, the girls love playing here at such a magnificent facility, a great stadium and a great field,” said Sayers. “We have turned home into a fortress, conceding just one goal this season at home, it’s motivating for the players when they get to play at home.”

The helped ETSU earn the No.2 seed in the SoCon Tournament which marks the highest regular season finish in school history. The Bucs will host either Western Carolina or Wofford on Saturday, Oct.29 at 7:00 p.m.

In a battle of the top two offenses in the conference, the blue and gold got on the board first in the fifth minute with sophomore Irina Brutsch (Zurich, Switzerland) recording her fourth goal of the season. ETSU was awarded a free kick outside the box as sophomore Emily McKerlie (Dumfries, Scotland) ran past the ball on the fake and Brutsch came in to rocket the ball off the left post and into the back of the net.

That was it for the first half as neither team was able to put the ball in the goal as ETSU took a 1-0 lead into halftime. In the first half the Bucs outshot the Paladins, 9-6 while Furman had the advantage in corner kicks, 4-1.

Back and forth both teams went in the second half as neither team was able to gain momentum. Furman’s best opportunity to score came in the 74th minute when forward Amanda Baker blasted a shot in front of the net. However, sophomore goalkeeper LeaAnn Cutshall (Johnson City, Tenn.) was right in front just getting her fingertips on the ball to deflect it over the cross bar and out of play.

With the missed opportunity the Buccaneers capitalized as freshman Elena Pisani (Milano, Italy) scored her second goal of the season in the 76th minute to extend ETSU’s lead. On the left side of the box McKerlie was able to chip the ball into the air where Pisani came running in and headed the ball into the top right corner of the net to give ETSU the 2-0 lead.

Furman was able to get off back-to-back shots in the 85th minute but the Bucs defense stood tall, blocking both shots and preserved the eighth shutout of the season. In the net Cutshall recorded her third career shutout after making a career-high six saves. McKerlie and Re led the Bucs with three shots.  Sophomore Elenora Goldoni (Ferrara, Italy), who is second in the NCAA in goals scored (14) was limited to two shots.

ETSU will be back in action next weekend inside Summers-Taylor Stadium for the SoCon Tournament Quarterfinals against either Western Carolina or Wofford on Saturday, Oct. 29 at 7:00 p.m. The Bucs will look to reach the SoCon semi-finals for just the second time in school history.