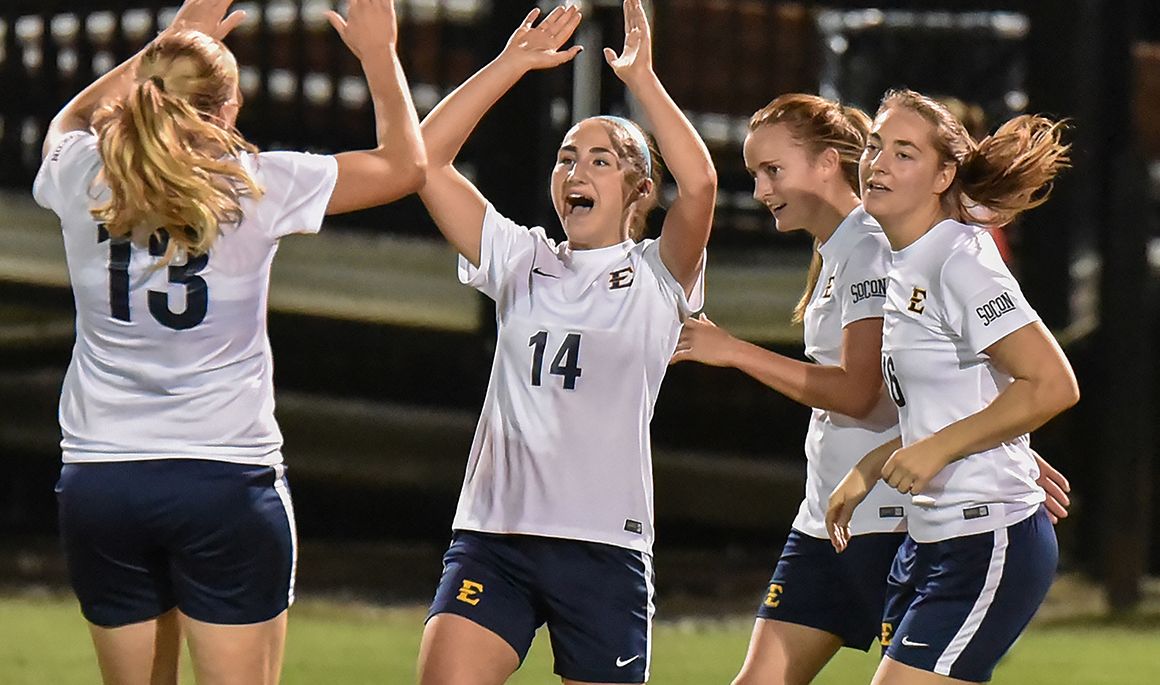 “Huge win as the players were absolutely fantastic,” said head coach Adam Sayers. “When you get into tournament play it is a totally different mindset and approach and it was a great performance, a great result and very proud of the players.”

The Bucs received goals from senior Molly Collinson (Cramlington, England) and sophomore Eleonora Goldoni (Ferrara, Italy) to propel ETSU to their ninth home victory, matching the program record for most home wins in a season.

Overall, ETSU outshot Western Carolina, 12-9 including six to five in shots on goal. Collinson led all players with four shots while Goldoni had three shots, two of which were on goal. In goal, sophomore LeaAnn Cutshall (Johnson City, Tenn.) made four saves.

“We take things one game at a time and it’s important to keep momentum when you have it,” said Sayers. “Hopefully we can keep our momentum going into the semi-finals next weekend.”

Both teams were on the attack earlier as the Catamounts and Buccaneers registered a combined seven shots through the first ten minutes of play. The blue and gold struck first as Collinson collected her sixth goal of the year to give ETSU the 1-0 lead.

After a turnover by Western Carolina, sophomore Irina Brutsch (Zurich, Switzerland) controlled the ball up the right side and passed the ball to Goldoni streaking in the middle of the box. Goldoni clipped the ball with her back heel and onto the foot of Collinson where she put the ball into the back right corner of the net to give the Bucs the lead.

That was all of the scoring at halftime as the Bucs held a 1-0 lead over the Catamounts through the first 45 minutes of play. In the first half, Western Carolina outshot ETSU, 6-5 while ETSU had more corner kicks at 3-0.

Western Carolina got on the board in the 73rd minute as an ETSU foul occurred within the box giving the Catamounts a penalty kick. WCU’s Kasey Cooke rocketed a shot that went into the back right corner of the net and just passed the outstretched hands of ETSU goalkeeper LeaAnn Cutshall (Johnson City, Tenn.) to knot the game up at 1-1.

It’s just the second goal ETSU has allowed at home this season and the first goal allowed in Johnson City since Sept.16 versus Alabama A&M.

The Bucs responded quickly as Eleonora Goldoni recorded her 15th goal of the season in the 76th minute to give the Bucs a 2-1 lead. Goldoni raced past two WCU defenders and chipped the ball up to herself inside the box. The Ferrara, Italy native, softly struck the ball from left to right as the ball trickled into the back of the net to give Goldoni the game-winner.

Western Carolina gave a last ditch effort at the end with back-to-back corner kicks in the final three minutes of play but the ETSU defense knocked the ball away both times to secure the victory.

For the second time in school history the Bucs will head to the SoCon Tournament Semi-Finals will they will await the winner of No.3 seed Mercer versus No.6 seed Chattanooga. ETSU’s semi-final match will be played on Friday, Nov.4 at 7:00p.m. inside Summers-Taylor Stadium.