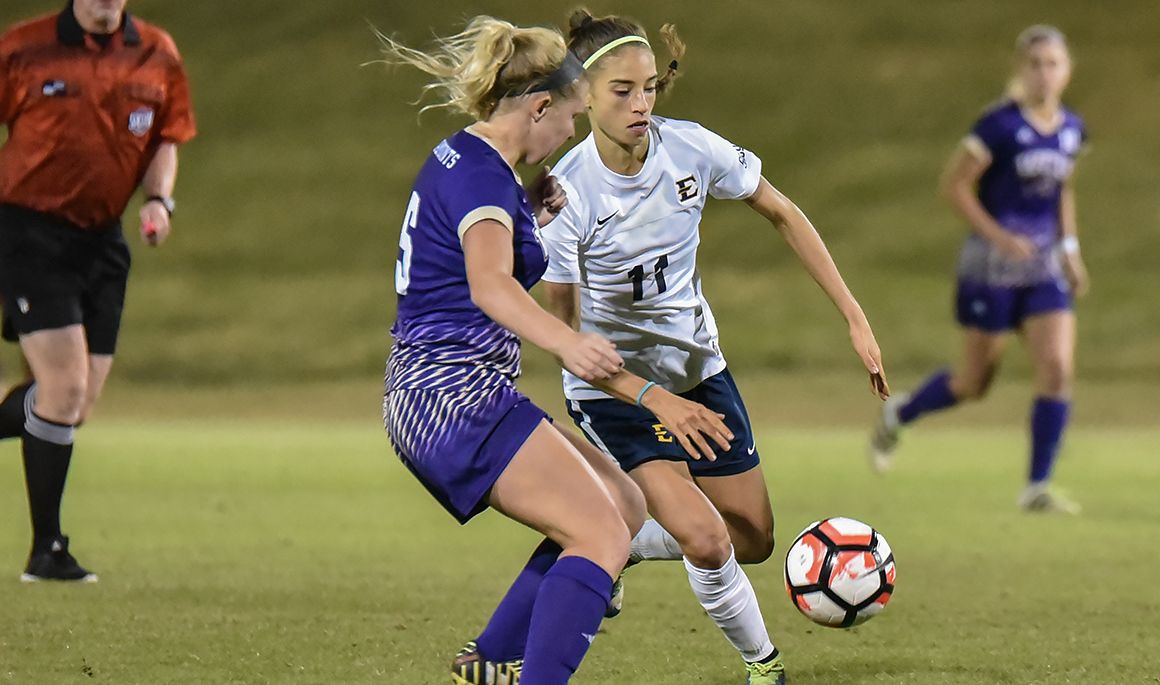 No.2 seed ETSU to face No.3 seed Mercer in SoCon Semifinals
Related Links

JOHNSON CITY, Tenn.  (November 3, 2016) – Making their second appearance in school history to the Southern Conference Tournament Semifinals, the ETSU women’s soccer team is set to square off against No.3 seed Mercer on Friday, Nov.4 at 7:30 p.m. inside Summers-Taylor Stadium.

Scouting the Buccaneers
ETSU is making their second appearance in school history to the SoCon Tournament semifinals after defeating No.7 Western Carolina, 2-1 last Saturday. In the last three games ETSU has outscored its opponents, 8-1 and have won six of their last eight games.

The Year of Goldoni
Sophomore Eleonora Goldoni (Ferrara, Italy) has been the Bucs main offensive threat in 2016 recording 15 goals which ranks second in the SoCon and 9th in the NCAA. Goldoni’s 33 points (15g, 3a) is the third most in a single-season in ETSU history. The sophomore midfielder ranks top 10 in ETSU’s single-season history in goals (15), points (33) and shots (58).

Home Sweet Home
ETSU is a perfect 9-0 at home during the 2016-17 campaign, tying the program record for most victories at home in a season. The Bucs have surrendered just two goals in Johnson City this year.

Breaking the Shutout Record
On the final weekend of the regular season the ETSU women’s soccer team broke the program record for most shutouts (8) and most shutouts at home (7) in a single-season after blanking Wofford, 4-0 and Furman, 2-0.

Scouting Mercer
Mercer is currently riding a seven-game winning streak heading into Friday’s semifinal contest after defeating No.6 seed Chattanooga, 3-0 in the SoCon quarterfinals. The Bears had three players named All-Conference as Maddie Clark and Corinne Wooten earned first team honors while Megan Delmonico was named to the all-freshman team. As a team, Mercer in the SoCon ranks 9th in shots (205), 4th in points (85), 3rd in goals allowed (22) and 4th in goals against average (1.15).

Last Time Out vs. Mercer
The last time the Bucs and the Bears met was back on Sept.25 in Macon, Ga. as Mercer came away with a narrow, 3-2 victory over ETSU. In that game, ETSU outshot Mercer 20-11 as Eleonora Goldoni and Molly Collinson scored goals for the Bucs.

What’s at Stake?
The winner of Friday’s semifinal match will head to the SoCon Tournament Championship game on Sunday, Nov. 6 at 1:00 p.m.  The winner will face-off against the winner of No.1 Samford and No.4 Furman.