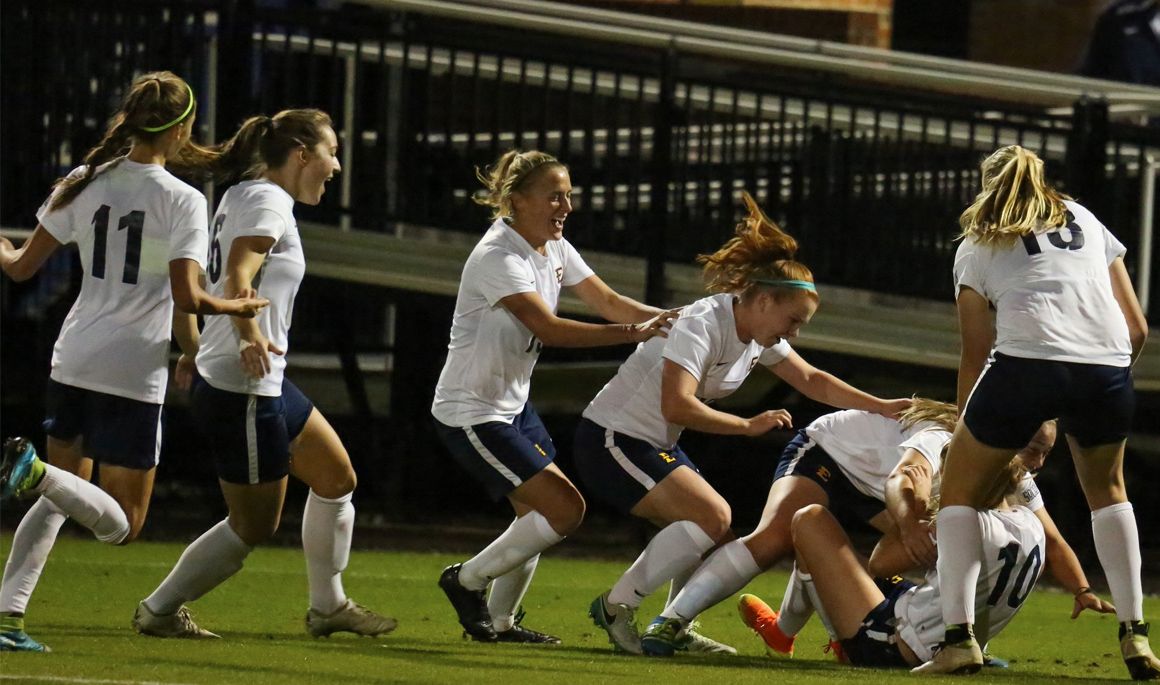 Isabel Hodgson with a career-high two goals and one assist

The Buccaneers got a career-high two goals and one assist from sophomore Isabel Hodgson (Adelaide, Australia) along with senior Molly Collinson (Cramlington, England) recording a goal in the 71st minute to give ETSU the 3-1 victory. It was the Bucs first victory over Mercer since 2011

"It was a great environment, great stadium, great field and it really motivates the players,” said head coach Adam Sayers. “When we get the fans out like this and create this type of atmosphere, it keeps driving the players forward and you could see that tonight.”

The ETSU women’s soccer team continued its historic season on Friday night as the 3-1 victory marked the 10th win at home this season, breaking the school record. On the night, ETSU outshot Mercer, 24-7 including 14-3 in the first half and 10-4 in the second half. Sophomore Eleonora Goldoni (Ferrara, Italy) led the blue and gold with a career-high six shots.

ETSU got on the board first in the 20th minute as Hodgson scored the first of her two goals on the night. Sophomore Emily McKerlie (Dumfries, Scotland) took a corner kick that was headed into the air and bounced around before Hodgson found the ball on the right side and blasted the ball to the top right corner of the net for the early 1-0 lead.

The Bucs went into halftime with a 1-0 lead, outshooting the Bears, 14-3. ETSU improved their overall record to 13-0-1 when scoring the first goal and 11-0-0 when leading at half.

It was a back and forth second half as the Bucs and Bears combined to score three goals on 14 shots. Mercer tied the game up in the 55th minute off the foot of Maddie Clark who recorded her 14th goal of the season. Racing up the right side, Clark raced past two ETSU defenders and rocketed a shot that went off the post and trickled into the back left corner of the net to tie the game.

Collinson netted the go-ahead goal for the Bucs in the 70th minute after a shot by Hodgson bounced off the crossbar and on to the foot of Collinson where she netted home her seventh goal of the season.

Six minutes later the Bucs extended their lead to 3-1 as Hodgson netted her second goal of the match, tipping the ball in after freshman Georgia Allen (Suffolk, England) rocketed a shot that went off the right post and to Hodgson.

The crowd roared as ETSU advances to their first-ever SoCon Tournament Championship and will square off with No.1 seed Samford on Sunday, November 6 at 1:00 p.m. The game can be streamed live on ESPN3.