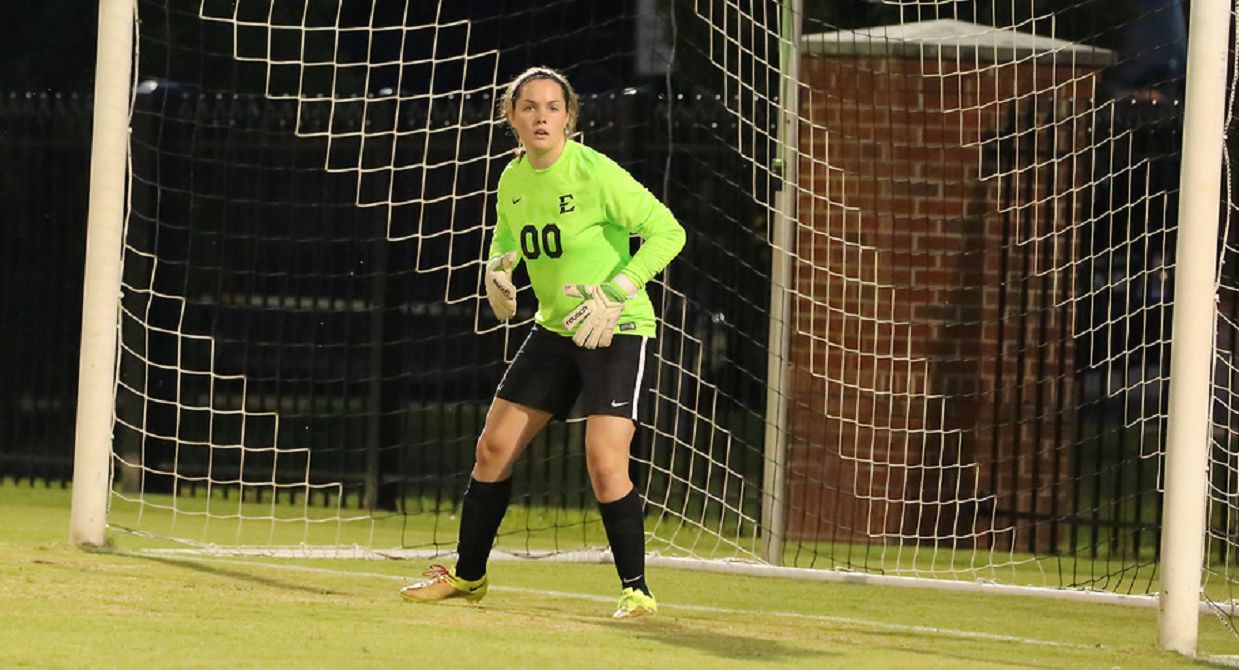 Live Stats will be available for both matches. Live video streaming will not be provided.

Both ETSU and UNCG are 1-1 in the SoCon after an up-and-down weekend in the first round of league games, while VMI is 0-1-1.

The Bucs shut out Chattanooga, 3-0, on September 22, and dropped a 2-0 decision to defending league champion Samford on September 24. Both games were at Summers-Taylor Stadium on the ETSU campus.

The Spartans started their SoCon schedule with a pair of road games, opening with a 4-3, double-overtime victory at Wofford on the 22nd. Furman shut out UNCG, 2-0, on the 24th.

VMI didn’t score a goal in its first two games, both on the road, but managed to salvage a point in the standings. The Keydets fell at Furman, 3-0, on September 22, but managed a 0-0, double-overtime draw at Wofford on September 24.

ETSU’s leading scorer, Elenora Goldoni (Ferrara, Italy), has seven goals, three assists, and 17 points. The junior has 24 goals for her career, and her next will move her past Simona Koren for 5th on the Bucs’ all-time list. Goldoni is three goals short of joining Sarah Zadrazil and Jordan Monty in 4th place.

Goldoni’s 54 career points put her at 7th on the all-time list. She needs one point to tie Molly Collinson for 6th and five to tie Koren for 5th.

Goldoni has taken 21 shots on goal so far this year, raising her career total to 60 and leaving her only two back of Collinson and Hannah Short for 4th-most all-time.

Goalkeeper Lea Ann Cutshall (Johnson City, Tenn.) is also moving up the ETSU leaderboard. Her two wins this season have her at eight for her career, just one back of Anna Yancey for 4th on the all-time list. Cutshall has two shutouts this season, giving her five for her career, tying her with Caitlin Gaughan for 5th all-time.

Cutshall’s 50 saves in 2017 have raised her career mark to 80 and past Yancey for 4th all-time. Cutshall is 12 behind Gaughan for 3rd.

A limited bench was one of the factors in ETSU’s setback to Samford last Sunday. The Bucs had only five reserve players available, and the Bulldogs exploited their deeper roster, bringing in fresh players on an 85-degree day to the tune of a 21-8 advantage in substitutions.

Much the same situation could face ETSU this weekend. Second-leading scorer Pauline Vienne (Lausanne, Switzerland) has missed the last four matches and her status for the weekend is uncertain. Vienne has scored 22% of the Bucs’ points (4 G, 3 A).

Eleonora Goldoni (Ferrara, Italy) leads the team in scoring (7 G, 3 A), and with the short-handed lineup has drawn increased attention from opposing defenses. Against Chattanooga on the 22nd, the Bucs’ offense got a boost from a pair of freshmen – Rafaella Guiliano (Caserta, Italy) posted a goal and an assist (her first collegiate points) and Maegan Sours (Erie, Colo.) scored her second goal of the season.

ETSU got another boost last weekend with the return of goalkeeper Lea Ann Cutshall (Johnson City, Tenn.). The junior missed the Bucs’ last three non-conference matches but was back between the pipes against Chattanooga and turned in her second shutout of the season. Cutshall made nine saves against Samford to keep the game close.

UNCG’s four-goal outburst in their double-overtime win at Wofford stands out, in that it represents nearly half of their scoring this season. The Spartans have nine goals in 11 matches and have been shut out six times.

On the other end, the Spartans have conceded just 18 goals, seven of them in two matches against Atlantic Coast Conference opponents (a 3-0 loss at #21 Florida State on August 18 and 4-0 home loss to #27 Clemson on August 27).

The trio of Emily Jensen, Quiqui Hita and Regan Lehman has combined for seven goals and three assists – 17 of the team’s 25 points.

Aiyanah Tyler-Cooper is UNCG’s primary goalkeeper. She has 50 saves in 11 appearances with a 1.32 goals-against average and a .794 save percentage.

UNCG leads the all-time series against ETSU, which dates back to 1997, ten wins to four. But all the Spartans’ victories came before the Bucs left the Southern Conference for the Atlantic Sun after the 2004 season. Since ETSU’s return in 2014, the Bucs have won all four matchups, outscoring UNCG 10-4 in the process.

ETSU faces another defensive-minded foe on Sunday with the visit to VMI. The Keydets have scored ten goals in their 11 matches and have been shut out six times. Over their last seven matches, VMI has been outscored 13-2 and found itself on the wrong side of an opponents’ clean sheet five times.

The Keydets have gotten their ten goals from six different players. Emma Quirk leads the team with three goals, while Julianne Knoblett and Taylor Callahan have two each.

VMI has conceded 18 goals this season and has been outshot 212-128. Goalkeeper Ceci Keppeler has been busy, with 80 saves, an .825 save percentage and two shutouts in 11 appearances. Keppeler leads the SoCon (and is 3rd in the nation) in saves. She’s 2nd in the league and 80th in the country in save percentage.

The all-time series between ETSU and VMI is fairly recent, going back to only 2013. The Bucs have won all four matches by a combined score of 17-1 and have shut out the Keydets in their last three meetings.

The Bucs will play two matches at Summers-Taylor Stadium during Homecoming Week. ETSU hosts The Citadel at 7:00 pm on Wednesday, October 4, then takes on Mercer at 2:00 pm on Sunday, October 8.