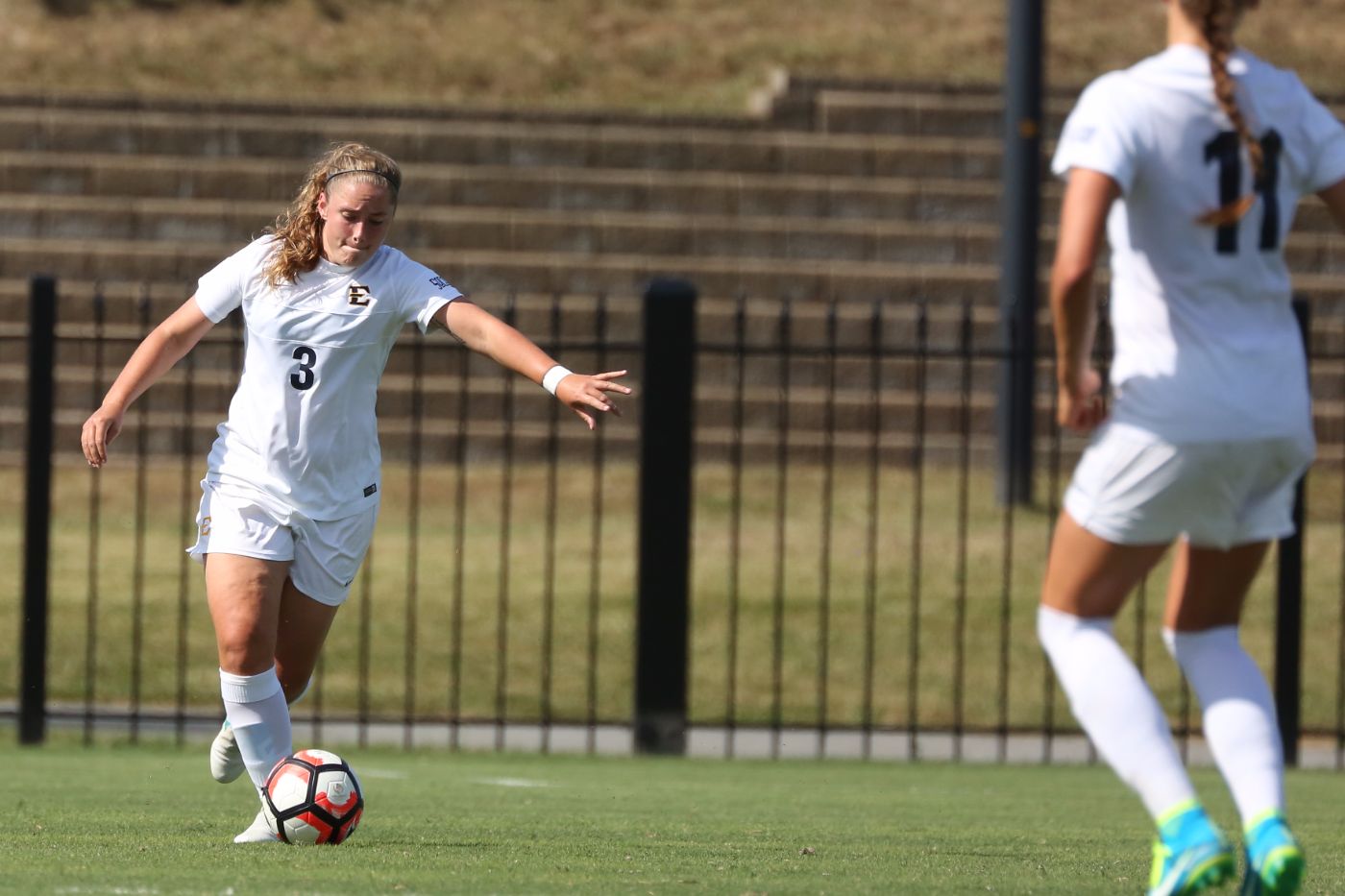 Sunday, they’ll host the last game of Homecoming Week, with a Southern Conference match against Mercer. Kickoff is at 2:00 pm at Summers-Taylor Soccer Stadium.

The Bucs defeated The Citadel, 4-2, on Wednesday night. Mercer goes into Sunday’s match on a much quicker turnaround – it’s the second of a two-game road trip that began with a 3-2 win at Western Carolina on Friday night.

ETSU (4-9-0, 2-3-0) got its offense back on track in Wednesday’s 4-2 win over The Citadel. The four goals snapped a three-match scoreless string and were the second-most in a game this season.

The Bucs’ leading scorer led the way with three goals. Elenora Goldoni (Ferrara, Italy) put ETSU in front at the 32:40 mark of the 1st half, and scored twice more in a three-goal outburst early in the 2nd half that put the match out of reach.

Goldoni buried a short-range blast at 54:21, and completed the natural hat trick by going top shelf off a cross from Rachel Harbin (Arlington, Tenn.) less than 13 minutes later.

Freshman Sarah Connolly (Ballygowan, Northern Ireland) extended the lead to 4-0 – off an assist from Emily McKerlie (Dumfries, Scotland) – with her first collegiate goal, in the 80th minute.

The Citadel denied ETSU’s shutout bid with a pair of goals in the final ten minutes. But the Bucs improved to 8-0-1 all-time against the Bulldogs

Mercer (9-5-0, 3-1-0) started well in its match at Western Carolina on Friday night. The Bears scored three goals in the first 23 minutes – with a goal and an assist from Sarah Adcock – and carried a 3-0 lead well into the 2nd half. But the Bears allowed an own goal in the 56th minute, and conceded a goal to the Catamounts’ Emily Threatt less than eight minutes later.

Western Carolina was in a position to tie the score when Sayres McKenna was awarded a penalty kick in the 68th minute. But Bears goalkeeper Jordyn Ebert saved the shot, and the Catamounts came up empty on their final three shots of the night.

Goldoni’s Wednesday hat trick raised her career totals to 27 goals and 60 points. She’s tied with Jordan Monty and Sarah Zadrazil for 4th on the Bucs’ all-time goals list, and needs three more to tie with Ramey Kerns in 3rd. Goldoni is 5th in career points, eight back of Kerns in 4th.

Goldoni has attempted 132 shots in her two-plus seasons, leaving her 15 back of Molly Collinson for 4th all-time. Goldoni is 3rd in career shots on goal, with 84, 19 behind Kerns for 2nd.

Goldoni is also rising on ETSU’s single-season record list. Her ten goals are tied for 8th-most, and she needs three more to move up to 3rd. Goldoni’s 23 points are four away from the top ten and seven shy of 3rd. Goldoni has taken 53 shots, 9th-most in a season and four back of Andrea Brown for 8th.

Goldoni went into the weekend ranked 8th in the nation in total goals (10) and shots on goals per game (2.46).

The Bucs trail in the all-time series, 3-8-2, and all three of ETSU’s wins have come at home. The two teams split two meetings last year, with Mercer taking a 3-2 home win on September 25 and the Bucs knocking out the Bears, 3-1, at Summers-Taylor Stadium on November 4 in the SoCon Tournament semi-finals. Isabel Hodgson (Adelaide, Australia) scored two goals and an assist in ETSU’s first-ever SoCon semi-final victory.

Live Video can be found here. Mike Gallagher will have play-by-play for the SoCon Digital Network.

The Bucs begin a two-game road swing with a visit to Wofford on Friday, October 13. Kickoff is scheduled for 7:00 pm at Snyder Field in Spartanburg, S.C.