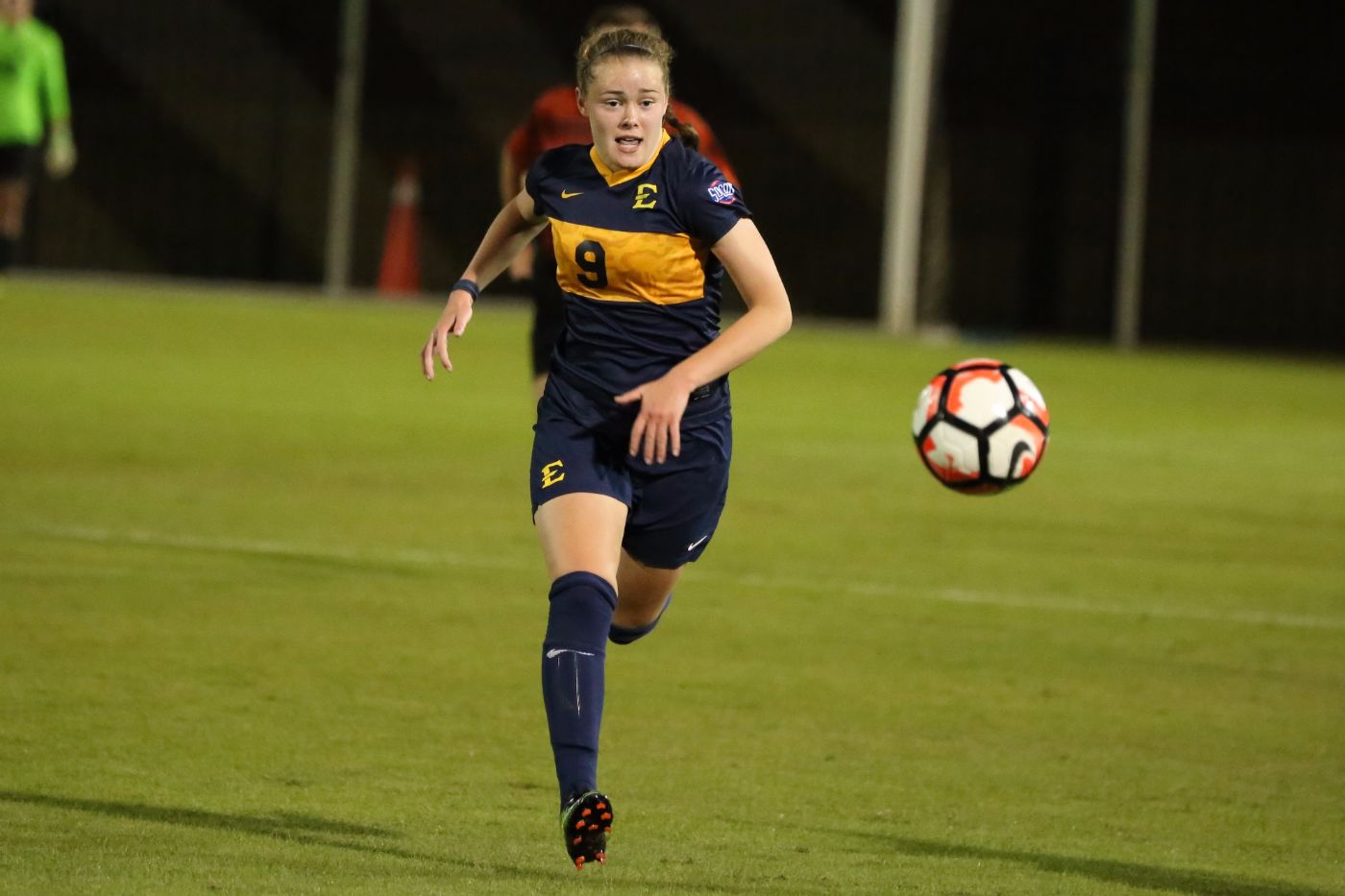 JOHNSON CITY, Tenn. (Oct. 12, 2017) – The ETSU women’s soccer team heads to South Carolina for its final road trip of the regular season this weekend, and how the Bucs perform could impact where they land in the final Southern Conference standings.

ETSU visits Spartanburg to take on Wofford at 7:00 pm on Friday, October 13, and meets first-place Furman in Greensville at 2:00 pm on Sunday, October 15.

After sweeping their two Homecoming Week matches – 4-2 over The Citadel on October 4, and 1-0 overtime win against Mercer on October 8 – the Bucs are 3-3 in the SoCon, tied for third in the table with three games left to play. The three sides either ahead of or tied with ETSU (Furman, Samford, Mercer) have four matches left on their schedules, as do three of the six teams currently behind the Bucs.

ETSU is among a group of SoCon teams still entertaining realistic title hopes, adding a sense of urgency to the stretch run. The regular season ends on October 22.

The Terriers (6-7-1, 1-3-1) go into the weekend tied with Chattanooga for 8th in the SoCon, although the schedule gives them an opportunity to move up. Three of their remaining conference games are against teams ahead of them, and the other is with the Mocs.

Success on offense has been essential to Wofford’s chances this season. In their six wins, the Terriers have outscored their opponents 25-3; in their seven losses, they’ve been outscored 27-11.

In last week’s two matches, ETSU’s defense took a shutout into the 82nd minute against The Citadel and put up a clean sheet against Mercer, which is tied with Wofford in goals scored in league play. The Bucs will need to stay stout at Snyder Field; the Terriers have averaged 3.29 goals per game on their home pitch.

The centerpiece of Wofford’s attack is Hayley Younginer, who leads the nation in goals (19), points (42), goals per game (1.36) and points per game (3.00). Younginer missed last year’s meeting with ETSU due to injury, but as a freshman in 2015 scored the only goal the Terriers’ 1-0 win at Snyder Field.

Katie Beuerlein (7 G, 4 A) is Wofford’s second-leading scorer, while Emma Fletcher and Hannah Washko have added eight points each.

ETSU has been hampered by a short-handed roster much of the season and may face the same situation this weekend. The Bucs defeated Mercer last Sunday despite lacking four of their top five scorers, yet went toe-to-toe with the Bears in shots (13-11) and were level in shots on goal (5).

ETSU trails the all-time series, 5-6-1, although the Bucs are 5-2-1 since the Terriers won the first four meetings between the two sides, a streak the Bucs ended with a 4-3 overtime victory in Johnson City in 2001.

Live Video can be found here.

In the SoCon’s pre-season poll, the league’s coaches picked Furman as one of the favorites to unseat three-time defending champion Samford. The Paladins received 67 points in the poll – the same as ETSU – while getting one of the nine first-place votes. (The Bulldogs received the other eight.) Furman also put four players on the pre-season all-conference squad, the most of any team.

So far, the Paladins have lived up to the billing. They have the SoCon’s best overall record (9-2-1), are tied with Samford for the league lead at 5-0-0, and are scheduled to visit the Bulldogs in a potential showdown on the final day of the regular season.

The Paladins’ defense has also performed well. In its 12 matches, Furman has conceded only seven goals (while scoring 35) and has eight shutouts, including the last seven consecutive games. Their last goal allowed was on September 1, when UAB’s Rachel Green scored 73 into overtime in the Blazers’ 3-2 win in Greenville. Since then, Furman has outscored its opponents 20-0.

In the back, Kellsey Weaver is Furman’s top goalkeeper, allowing six goals in 11 matches on the way to a 6-1-1 record.

Sunday will be the 13th meeting between the Bucs and Paladins. Furman won the first 11, although ETSU finally broke through last year with a 2-0 victory on October 23 at Summers-Taylor Soccer Stadium. The Bucs have dropped all six of their visits to Greenville by an aggregate of 23-2.

Live Video will not be available.

Her ten goals are 8th on the season list, and she’s just three away from vaulting all the way to 3rd. Goldoni’s 23 points leave her just four shy of the top ten, and her 53 shots attempted are 9th-best so far, and only four back of Andrea Brown for 8th.

In career totals, Goldoni has 27 goals, tied with Jordan Monty and Sarah Zadrazil for 4th on the Bucs’ all-time list, and three shy of Ramey Kerns in 3rd. Goldoni has 60 points, eight behind Kerns for 4th. Goldoni’s 71 career shots on goal are 4th-most, six back of Kerns for 3rd.

Goldoni, a junior, has attempted 132 shots, leaving her 15 back of Molly Collinson for 4th all-time. Goldoni’s 84 shots on goal are 3rd-most and 19 behind Kerns for 2nd.

(Goldoni was named the Southern Conference Student-Athlete of the Week on Wednesday.)

Bucs goalkeeper Lea Ann Cutshall (Johnson City, Tenn.) goes into the weekend with 11 career victories. Her next win moves her into a tie with Caitlin Gaughan for 3rd on the all-time list.

The Bucs have one more regular season match after this weekend. ETSU will host Western Carolina on Sunday, October 22, with kickoff at 2:00 pm at Summers-Taylor Stadium.