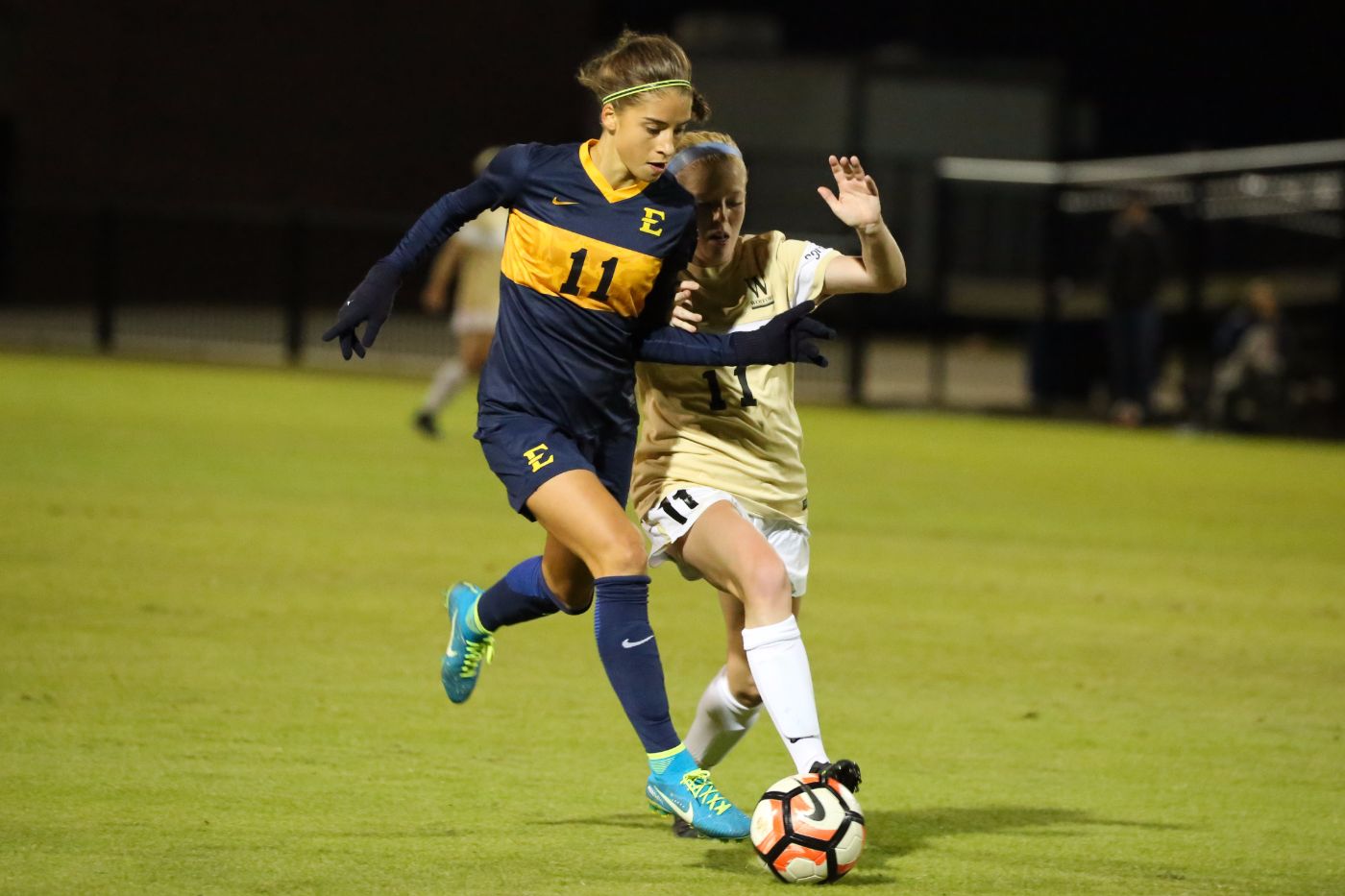 But Furman used a pair of successful long-distance free kicks to overcome an early ETSU lead and went to defeat the Bucs, 2-1, in the quarterfinals of the Southern Conference Women’s Soccer Tournament on Sunday in Spartanburg, S.C.

The 8th-seeded Bucs took the first lead of the day when Eleonora Goldoni (Ferrara, Italy) converted a penalty kick at 20:29, after the Paladins were called for a handball in the 18-yard area. It was the junior’s team-best 11th goal of the season. It was also just the second goal Furman conceded in its last 12 matches.

Furman (13-2-2) would draw level at 34:54 after Rachel Shah hooked a 25-yard free kick from the left of the penalty area into the upper right-hand corner of the net.

The top-seeded Paladins moved in front less than five minutes later. Jordan Evens lobbed a 40-yard free kick over traffic just outside the six-yard box, and it bounced into the left side of the net at 39:36.

ETSU pressed the attack and created opportunities on a wet pitch that grew bumpier and slipperier as the match went on, but couldn’t find the equalizer.

At 76:52, Fiona Dodge (Pontypool, Wales) blasted a 25-yarder, off a free kick from Emily McKerlie (Dumfries, Scotland), but the attempt was blocked. Less than a minute later, McKerlie lofted a promising corner kick in front of the net, only to see it wind up in the hands of Paladins goalkeeper Kellsey Weaver.

The last best chance came with only 36 seconds remaining, when McKerlie launched a 30-yard strike, but it was blocked in traffic in the penalty area and Furman was able to run out the clock.

Goldoni’s 11 goals in 2017 tie her with Terri Miller, Jordan Monty and Genna Petersen for 2nd-most in a single season. The junior’s 68 shots are the 3rd-most in a season, eclipsing her total of 66 last year. Her 26 points left her just one shy of a tie for 7th.

Goldoni’s goal Sunday puts her at 28 for her career, the 4th-most in ETSU history and only seven shy of Erin Ashton’s program record of 35. Goldoni’s 63 career points are 5th-most and five back of Ramey Kerns in 4th. In her three seasons, Goldoni has attempted 147 shots – tying her with Molly Collinson for 4th-most – and 73 shots on goal, four behind Kerns for 3rd in the Bucs’ book.

Junior goalkeeper Lea Ann Cutshall (Johnson City, Tenn.) recorded four saves Sunday, giving her 113 for her career. That’s the 3rd-most in ETSU history and 27 back of Megan Masch in 2nd.