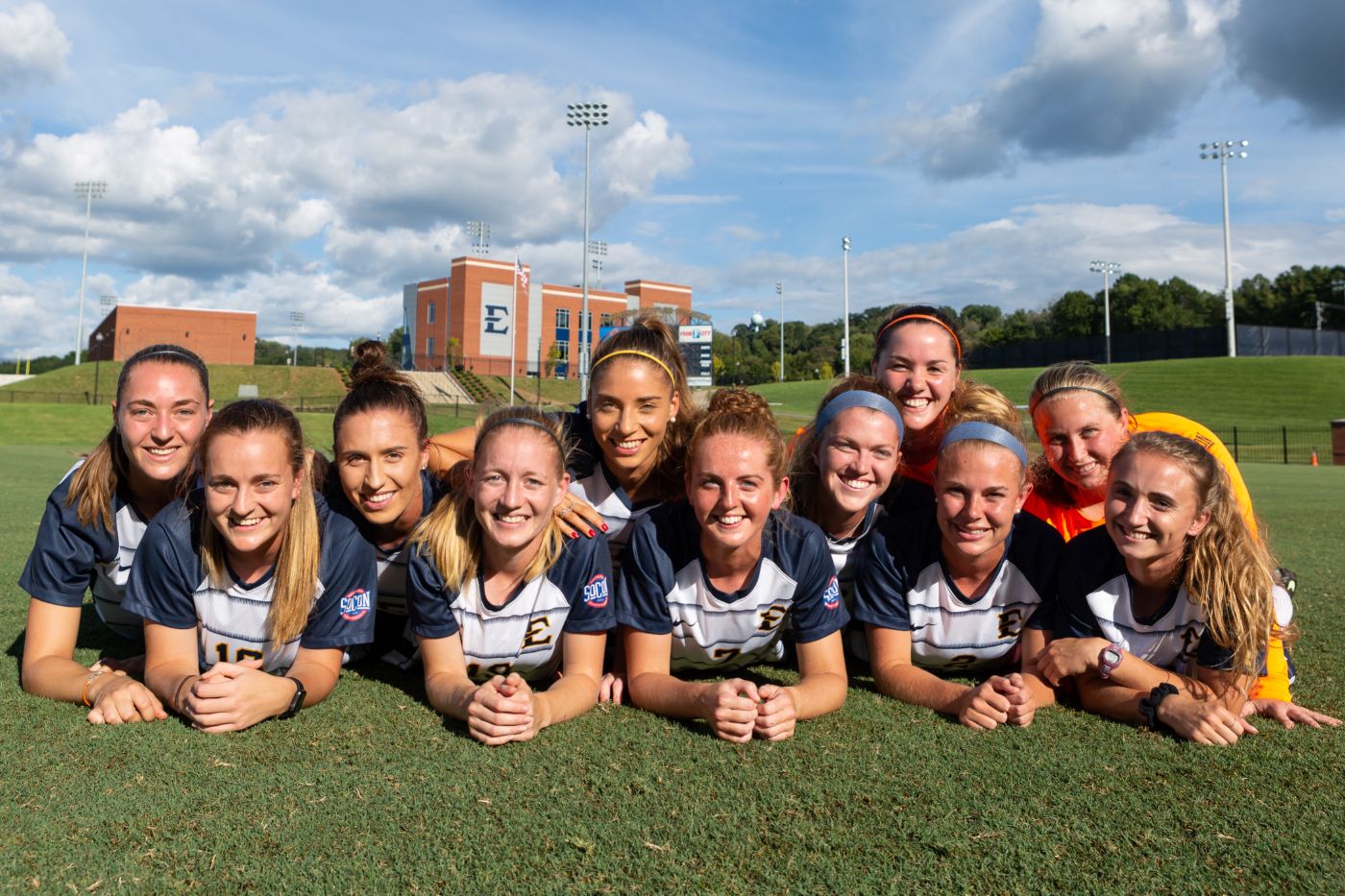 Note: Stats and information are updated through October 10, 2018

JOHNSON CITY, Tenn. (Oct. 10, 2018) – With the ETSU women’s soccer regular season winding down the next couple of weeks, the Bucs are two nights away from senior night against VMI set for Friday, Oct. 12 at 7 p.m.

Roughly 30 minutes prior to kickoff, all 11 ETSU seniors will be joined by family and friends as part of a special on-field presentation. Starting lineup introductions and the national anthem will follow before kickoff.

Below is a breakdown of our 11 seniors and their contributions to the ETSU women’s soccer program throughout their careers.

Myah Huss is a four-year member of the ETSU women’s soccer program — joining the team in 2015.

Huss made her collegiate debut as a freshman against the Citadel, recording four saves without allowing a goal. Huss also appeared twice last season, serving as part of a strong depth chart between the pipes. She will graduate with a degree in Exercise Science.

Lea Ann Cutshall is a local product from Science Hill High School and is a four-year member of the ETSU soccer program.

Cutshall became ETSU’s full-time starting goalie in 2016 and recorded three shutouts that season. Now a senior, she currently ranks second in career saves, career shutouts and career wins in ETSU women’s soccer history. Last season, Cutshall tied the single-season record at ETSU with five shutouts and looks to break that record this season with three so far. She will graduate with a degree in Biology.

Like many of her senior teammates, Delaney Griffin four-year member of the ETSU women’s soccer team.

Griffin scored her first career goal back in 2015 against the Citadel and has since became an important piece in the forward rotation. This season, Delaney has started in a career-high six games with 13 appearances, scoring a goal against King last Monday and recording an assist against Tennessee Tech earlier this season. She graduates with a degree in Biochemistry this year.

A fourth-year member of the program, Fiona Dodge has played in 63 games with 49 career starts.

Dodge’s hottest start to a season came this year, as she has a pair of goals and a couple of assists. The senior had a goal and an assist at home against Winthrop before posting a second assist the following game against USC Upstate, which was ETSU’s first win of 2018. For her career, she has four goals and seven assists. She will graduate with a degree in Exercise Science.

Brittney Jones has started in eight matches throughout her four-year career with 38 appearances in the midfielder and defender positions.

Last fall, Jones not only performed on the field, but also in the classroom earning a spot on the Southern Conference Fall Academic All-Conference Team. She will graduate with a degree in Nursing.

Cathy Rees is in her second year with the Bucs and has appeared in 17 games as a Buccaneer with five starts.

Rees made her first career start at ETSU a memorable one, scoring her first collegiate goal against Virginia Tech on Sept. 7, 2017 at Summers-Taylor Stadium. Cathy will graduate with a degree in Sports Science.

One of ETSU’s most prominent players in its history, Isabel Hodgson has played in 72 games with 62 career starts — one away from tying her second place in all-time career appearances as a Buccaneer.

In her four-year career, Hodgson has only missed one game. For her career, she has 10 goals, 12 assists and 32 points. In 2016, she posted nine assists to rank fifth all-time in assists for as season at ETSU while also leading the Bucs to the SoCon final with three goals and an assist in the final two games, landing on the SoCon All-tournament team. Hodgson will graduate with a degree in Theatre.

Goldoni has played in 56 games with 44 starts and has earned both First and Second Team All-SoCon honors throughout her career, as well as SoCon Player of the Week for a hat-trick performance against The Citadel last season. A four-year member of the team, Goldoni will graduate with a degree in Nutrition.

Victoria Riesterer has been a member of the starting backline for the better part of her career. She has played in 59 games with 41 career starts.

Even as a center back, Riesterer recorded her first career assist as a sophomore in 2016 at Tennessee Tech. In addition to her contributions on the back line, Riesterer has also performed in the classroom as she has made the SoCon Fall Academic All-Conference team every season she has been eligible. She will graduate with a degree in Marketing Management.

Pauline Vienne has played in 57 matches and has 47 career starts at multiple positions throughout her four-year career.

Vienne has not only proven she can play the outside as a defender, but also has a proved striking ability with five goals and nine assists for her career. Vienne’s most memorable game was the 2017 season opener against South Carolina State — where she scored three goals and had three assists for a nine-point game.

She has been a SoCon Second-Team selection and a two-time Academic All-Conference pick. Pauline will graduate with a degree in Exercise Science.

Another four-year member of the program, Rachel Harbin has appeared in 58 games with 29 starts throughout her career.

She has scored at least one goal and two assists every season and has a career total of seven goals to go along with 14 assists. On top of her on-the-field accomplishments, Rachel is the president of the Student-Athlete Advisory Committee (SAAC) at ETSU and is also a two-time member of the Academic All-Conference team. She will graduate with a degree in Graphic Design.