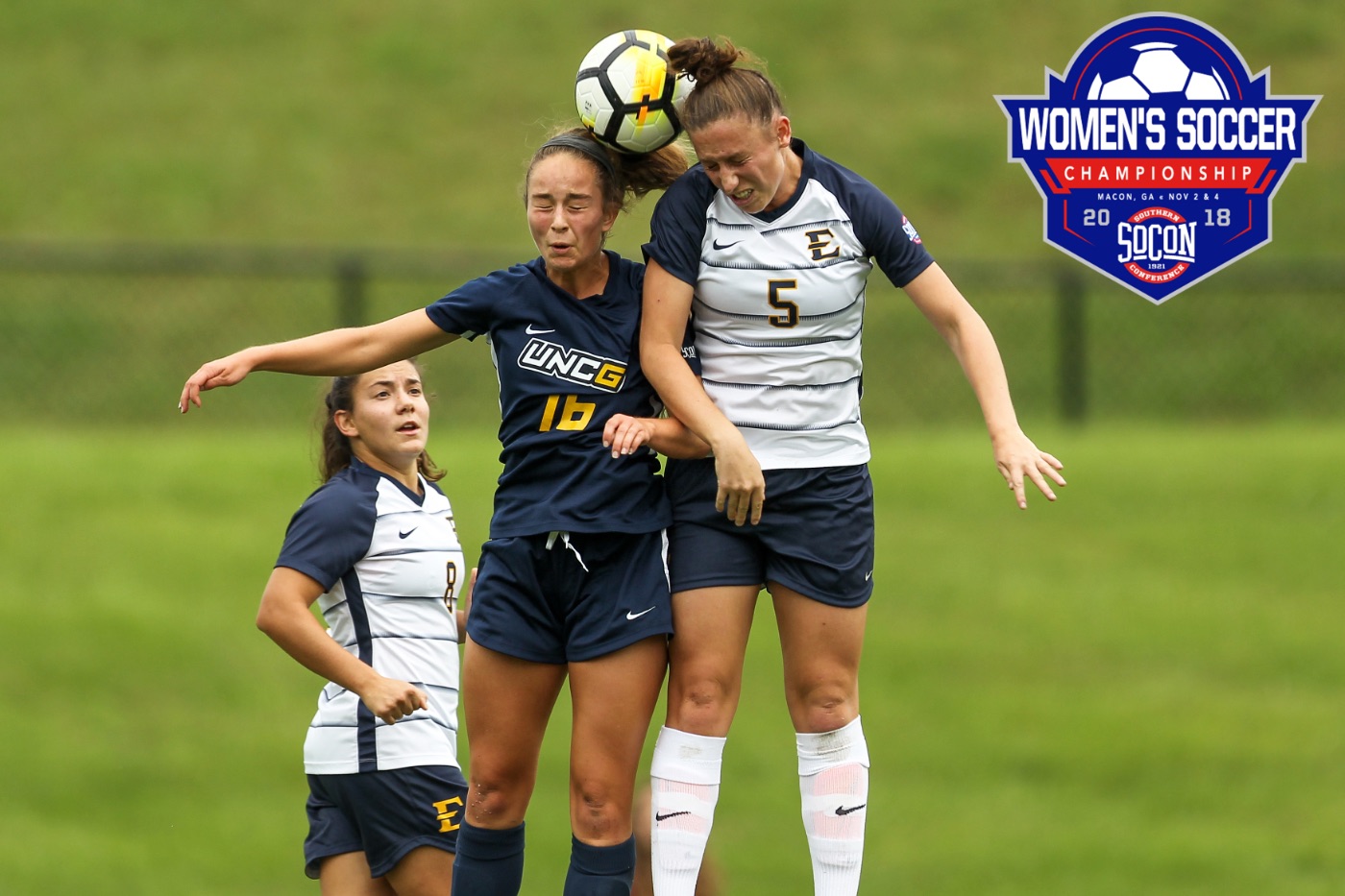 Senior Fiona Dodge goes head-to-head with UNCG earlier this year. The two will again go head-to-head in the SoCon semifinals Friday in Macon.
No. 3 Bucs to face No. 2 UNCG in SoCon semifinal
East Tennessee State at UNCG | November 02, 2018
Related Links

The Bucs will battle No. 2 UNCG in Macon, Ga. with a spot in the SoCon championship final on the line. Kickoff in the nightcap from Mercer’s Betts Field is set for 6:30 p.m.

The winner of Friday night’s game will take on the winner of No. 1 Samford vs. No. 5 Furman, which will take place at 4 p.m. on Friday in the same location. The championship final is set for Sunday, Nov. 4 at 2 p.m. Admission is free to all three games this weekend.

Both of tomorrow’s games will be streamed on the SoCon Digital Network, while Sunday’s championship will be broadcast on ESPN+. Live Stats are also available below.

Since establishing its program in 1997, the Bucs have gradually proven its ability to contend for a championship. Taking its bumps early, the Bucs finally earned their first conference tournament win in 2007 as a member of the ASUN.

Since ETSU’s return to the SoCon in 2014, the Blue and Gold hold a 5-4 record in tournament competition. All five wins for the Bucs have been at Summers-Taylor Stadium in Johnson City.

The Bucs are 1-1 in semifinal games since returning in 2014, falling to Samford 2-1 in 2014 before defeating Mercer 3-1 to advance to their first-ever SoCon Championship in 2016. In that game, current senior Isabel Hodgson (Adelaide, Australia) scored two goals and assisted on the game winner to contribute to the win.

ETSU has faced UNCG three times in SoCon tournament play. The Spartans ousted the Bucs in their first two years as a program, winning as the top seed in 1997 and 1998. ETSU returned to the SoCon with a vengeance, knocking off UNCG in the 2014 quarterfinals with a 3-2 overtime win.

Senior forward Eleonora Goldoni (Ferrara, Italy) shattered the all-time record for career goals last weekend at The Citadel with a game-tying penalty kick. She now has 36 goals for her four-year career, passing Erin Ashton (2002-06) for sole possession of the record.

Senior defender Isabel Hodgson (Adelaide, Australia) has been a consistent piece in the puzzle the last four seasons, appearing in all but one game throughout her career. She has 77 career appearances, breaking the all-time record this past Sunday for games as a Buccaneer —formerly held by Cecilia Re (2013-16).

The SoCon Player of the Year and Freshman of the Year are both on the UNCG roster this season, as Cienna Rideout and Nicole Souply each took home the honors, respectively.

The Spartans lead the SoCon in assists with 41 and points at 125 and are tied with Mercer for the lead in goals with 42. UNCG is also one of three teams with a sub 1.00 goals against average at 0.88, thanks in part to second team all-SoCon goalkeeper Aiyanah Tyler-Cooper.

UNCG holds an 11-5 advantage over ETSU in the all-time series, but the Bucs are winners of five of the last six games between the two sides.

The series began in favor of the Spartans, as UNCG won the first 10 contests between the two from 1997 to 2004 prior to ETSU’s departure from the SoCon. Two of the 10 games were tournament contests in 1997 and 1998.

ETSU returned to the conference with a vengeance in 2014, winning the first four games against UNCG before the Spartans snapped the Buccaneer streak in 2017.

The Bucs won this year’s contest in Johnson City with an upset of sorts, blanking a Spartan team, 1-0, that was previously-unbeaten in conference play.

As mentioned in the tournament history section, ETSU won the last SoCon tournament game between the two and the only match since the Bucs’ return to the SoCon in 2014, 3-2, in overtime. The Bucs were the No. 4 seed and UNCG was in the No. 5 spot.