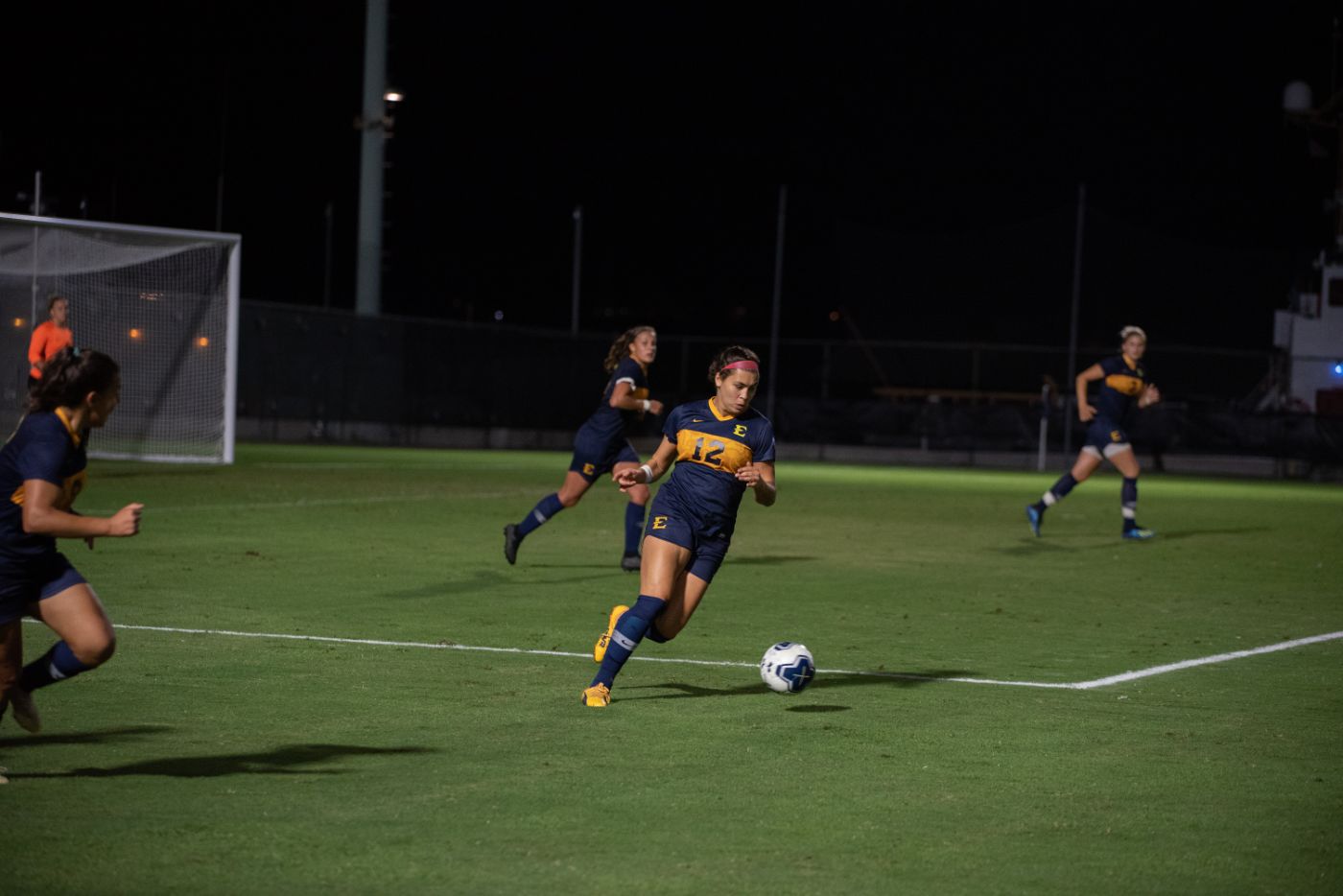 JOHNSON CITY, Tenn. (Sept. 12, 2019) – After putting five goals past Delaware State last Sunday, the ETSU women’s soccer team look to carry the fine form in front of goal on their home-and-away weekend. The Bucs host Radford at Summers-Taylor Stadium on Friday at 7 p.m. before heading on the road to battle Winthrop in another 7 p.m. contest.

The Bucs recorded their highest offensive production of the season in their last game, taking down the Hornets of Deleware State in a 5-2 rout in the second game of their weekend road trip. Freshman Anjela Kricak (Krusevac, Serbia) introduced herself to the Bucs history book, grabbing her first two goals and an assist in blue and gold against the Hornets. Freshman counterpart Momoko Horiuchi (Paris, Tenn.) and graduate transfer Pamela Penaloza (Bogota, Colombia) found their second goal of the season, while leading returning goal scorer Sarah Connolly (Bollygowan, Northern Ireland) kicked off her 2019 season to break the goal scoring slump to start the year.

Tomorrow’s contest will be streamed on SoCon Digital. Play-by-play announcer Mike Gallagher will call the action.

The Bucs have had a steady presence in the central defense this year, as senior Elena Pisani (Milan, Italy) and Marina Bradic (Medvedja, Serbia) have been integral in the ETSU defense. On the outside, Kourtney Gaylord (Mooresville, N.C.) received a well-deserved break in the Delaware State game after playing in every minute prior in 2019. Freshman Taylor Limprevil (Spring Hill, Tenn.) and junior Raffaella Giuliano (Caserta, Italy) have shared duties at left back, allowing Giuliano to push forward into the midfield on occasions. Tess Mrozek (Johnson City, Tenn.) and Courtney Green (Lake Worth, Fla.) have split duties in the net this season, with the former getting the nod in all six starts thus far.

A host of players have been able to rotate in the midfield early on for Adam Sayer’s side. Kendall King (Charlotte, N.C.) Beatrice Abati (Milan, Italy), Kricak and Penaloza have had the recent nod as the midfield partnership, the four tallying five of the team’s 11 goals and half of the six assists for the Bucs. Six others have grabbed minutes in the midfield, giving Sayers a blend of youth and experience in the position.

Spearheading the front line of the Bucs attack has been Connolly, who opened her account the last time out from a 25 yard effort on goal. Joining her on the wings along with Horiuchi (team-high five points) has been Maegan Sours (Erie, Colo.). The junior scored in the season-opener against King in a long-distanced effort. Jocelyn Nehls (New Richmond, Ohio) has provided cover on the wing, recording an assist in her debut.

The Highlanders have raced out to a 5-1 start on their season, their only slip coming against Elon in a narrow 2-1 defeat. Radford has beat two SoCon opponents on the year, a 1-0 win at VMI and a 2-1 victory at Wofford. The Highlanders have outscored opponents 10-3 on the season, earning four shutouts along the way.

Senior forward Nelia Perez leads the Highlanders offense, scoring three goals and adding one assist in six games. Gabi Paupst and Brianna Oliver each have tallied two goals and an assist as well, while 10 total players have provided a well-balanced attack and has either a goal or an assist.

Courtenay Kaplan safeguards the Highlander goal, playing and starting in all six games thus far. The senior has allowed just two goals and holds a .913 save percentage on the season, allowing just .51 goals per game.

Prior to the weekend’s action against South Carolina State Thursday night and ETSU on Sunday, Winthrop holds a 0-3 record in their 2019 season.

Forward Keeley Leising has been involved in all three Winthrop goals, credited with an assist in all three. Two of those goals came from the foot of fellow senior Natalie Royaards who heads into the first of their matchups on the weekend with a two-game scoring streak.

Ashlynn Harris has been the lone goalkeeper for the Eagles in 2019. The junior faced 25 shots in their last match, earning herself a season-high with 9 saves against the College of Charleston.

The Bucs hold a 9-6-2 advantage over the Highlanders. In their last matchup, Radford took the spoils in a 4-1 performance over the Bucs in Radford. Prior to that, ETSU boasted a six-game win streak in which they outscored the Highlanders 13-5. The Bucs have held a strong home record against their Friday opponents, a 5-1-2 record at Summers-Taylor.

In last year’s matchup between the two sides, it was Winthrop who walked out of Johnson City with a narrow 3-2 victory against Sayer’s team to earn their second win in eight attempts against the Blue and Gold. It was the first loss at home in the series history. The Bucs have held two three-game winning streaks against the Eagles before dropping a contest, beaming a 6-2 advantage heading into Sunday’s match.