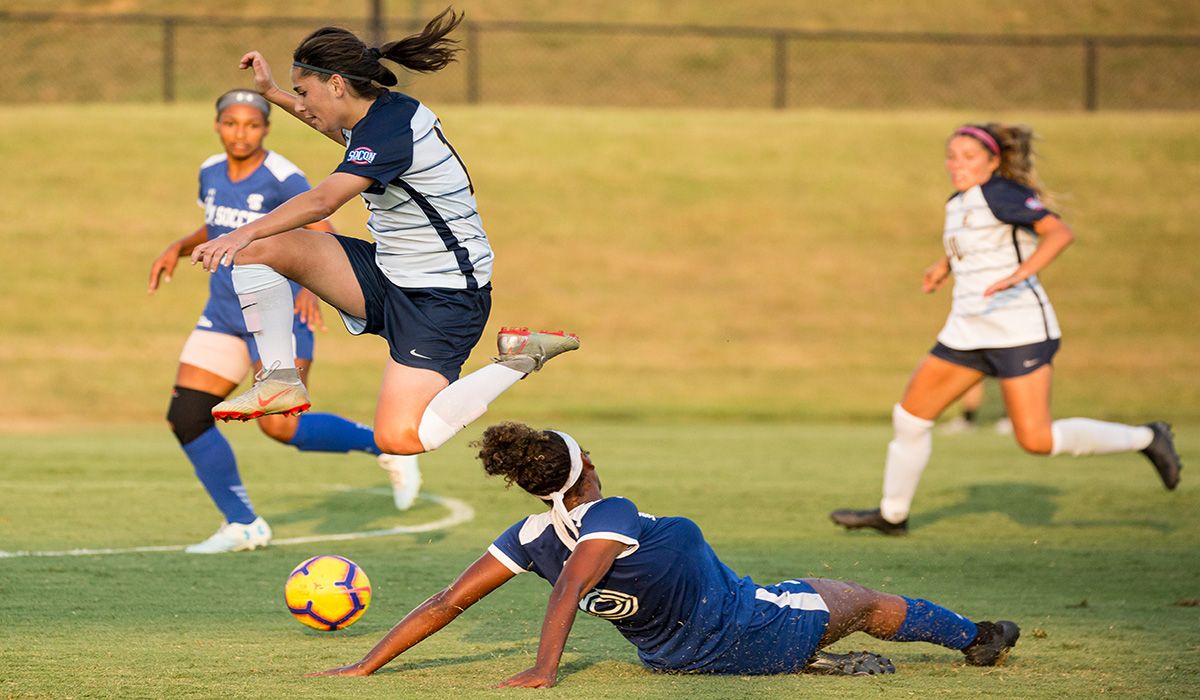 JOHNSON CITY, Tenn. (September 26, 2019) – ETSU women’s soccer look to open their conference play on Friday evening before heading on the road for the final non-conference action on Monday. The Bucs host Western Carolina in SoCon play at Summers-Taylor Stadium at 7 p.m. before taking on SC State in a 4 p.m. kickoff.

After heading into the Hampton game with 180 minutes without scoring a goal, the Bucs put it right after a 2-1 victory over the Pirates. After grabbing two early goals from Beatrice Abati (Milan, Italy) and Sarah Connolly (Bollygowan, Northern Ireland), the second of the season for both of them, the Bucs went into the half with a comfortable lead. The Pirates made it close towards the end, grabbing a goal back within the last 15 minutes to make the Blue and Gold stifle the Hampton attack to hold on to a lead.

Tomorrow’s contest will be streamed on ESPN3. Play-by-play announcer Mike Gallagher will call the action.

Live stats for Monday’s contest will be provided through social media outlets on the day of the contest if available.

Head coach Adam Sayers has had the luxury of a solid center back partnership to rely on as Marina Bradic (Medvedja, Serbia) and Elena Pisani have started together in all nine matches to start the season. Kourtney Gaylord (Mooresville, N.C.) has held down the right back position in eight of the nine matches, earning a rest in the 5-2 win over Delaware State. The flexibility and reliability of Rafaella Giuliano (Caserta, Italy) has been on display over the course of the season, as Sayers has been able to deploy her in the midfield as well as at left back.

Tess Mrozek (Johnson City, Tenn.) has looked comfortable in the net for her hometown side, starting in all nine matches while playing all but 96 minutes of action over the season. Mrozek was the first Buc to receive SoCon Player of the Week honors, earning it on the defensive side of the ball after her 12 save performance against Gardner-Webb.

Starting the season as a sub, Kendall King (Charlotte, N.C.) has cemented a starting spot throughout the season and helps lead the Bucs in the early going in assists, collecting both of hers off set pieces. ETSU newcomers Pamela Penaloza (Bogota, Columbia; transfer from Austin Peay) and freshman Anjela Kricak (Krusevac, Serbia) have provided glimpses of tidy finishing from the midfield with two goals, the latter providing an assist as well. Beatrice Abati (Milan, Italy) has started in the last seven competitions while adding her first two collegiate goals, while Caitlin Bevan (Cardiff, Wales) has provided depth as well as a goal on her collegiate debut.

Higher up the line, Momoko Horiuchi (Paris, Tenn.) is tied for the lead on the team with five points in her freshman campaign. Leading goal scoring returner from last year Sarah Connolly (Bollygowan, Northern Ireland) recently continued her season with her second of the campaign, as Maegan Sours (Erie, Colo.) has provided a goal and a consistent face down the left side of the wing while Jocelyn Nehls (New Richmond, Ohio) grabbed her second assist of the season against the Pirates.

The Bucs have grabbed seven of their 13 goals and five of the eight Buccaneer assists from players who did not don the blue and gold last year, a healthy return from a group of players looking to fill the attacking void that graduated from last year’s talented senior class.

In the best start to the season since 2007, the Catamounts are off to a 6-3 record entering Friday’s matchup at Summers-Taylor Stadium. While recording a formidable 4-1 record in the friendly confines of their home field, the Catamounts have been prone to woes on the road, tallying a 2-2 record outside of Cullowhee.

Western Carolina has scored 15 goals in their nine games, recording 10 different goal scorers in the season. Junior Regan Ward lead the Catamounts with four goals, while both Payton Creed and Julia Winter have tagged two goals. Winter leads the creative side of the attack as well, having assisted in three additional goals, the only Catamount to have more than one assist.

Melody Mezzina has grabbed the reigns as the starting goalkeeper for WCU, as the Catamounts have tried three different keepers to safeguard the net. Since taking over, Mezzina has collected 19 saves and a 4-2 record, her three shutouts leading the conference. Prior to the 3-1 defeat to North Florida, Mezzina had only given up one goal in 360 minutes of action.

SC State has opened the season to a 1-6 start, including a 0-2 record at home. The Bulldogs have been outscored 21-10 in the season, earning their solo victory against Alcorn State in a 3-0 fashion.

The Bulldogs opened their season against a familiar SoCon foe as Wofford convincingly swept the visitors in a 5-1 outcome. The two sides have played two familiar foes up to this point. Winthrop, beating the Bucs by a narrow 1-0 margin with just under 20 minutes to go, ousted the Bulldogs by a 5-1 score line. Gardner-Webb also knocked off SC State with a 3-1 victory. The Bucs and Runnin’ Bulldogs played to a 1-1 draw after 110 minutes early in the season.

The Catamounts and Bucs hold as equally as contested of a series one might find. Only two times in the previous 15 contests has a game been decided by more than one goal, as WCU holds a 7-6-2 advantage. ETSU won last year’s contest by a 1-0 margin in Cullowhee, N.C.

The Bucs have dominated in the series history against the Bulldogs, holding a 7-0 record in matchups with SC State. In those seven outings, the Bucs have outscored the Bulldogs 51-2.