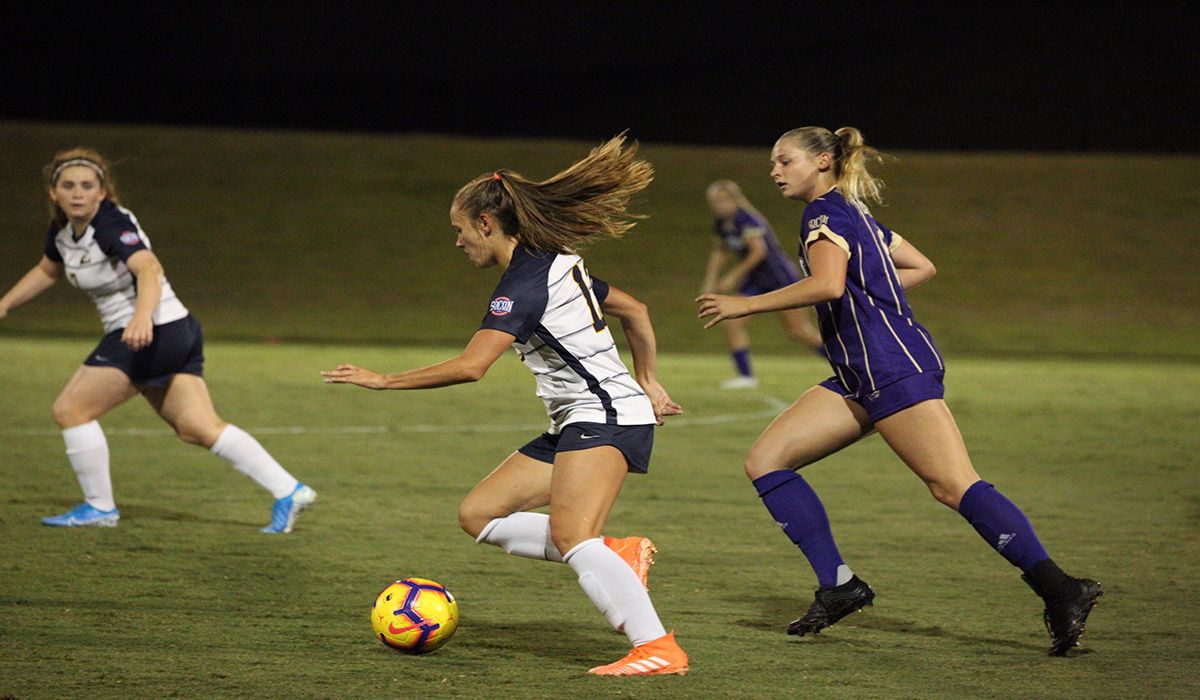 JOHNSON CITY, Tenn. (Sept. 27, 2019) – After nearly a two hour weather delay interrupting the SoCon opener, the Buccaneers were on the wrong side of a narrow 2-1 defeat to Western Carolina in double-overtime at Summers-Taylor Stadium Friday evening.

ETSU (3-5-2, 0-1-0 SoCon) started the game in a strong fashion, matching the effort and chances from Western Carolina (7-3-0, 1-0-0 SoCon). Just 18 minutes in, that strong start would be put on hold as lightning struck close enough to the stadium to cause a 30 minute delay.

Just as the delay ended and the teams walked out to the field, another flash was seen in the distance, causing the clock to be rewound and started over. The delay would last an hour and 55 minutes, the two teams getting things back under way just before 9:00 p.m.

The Catamounts were the quickest to respond coming out of the delay, creating two penetrating chances in less than 10 minutes, the second of the two resulting in the opening goal of the contest in favor of Western Carolina. A Julia Winter pass beyond the backline sent in Emily Threatt on goal, the forward making no mistake near post and buried the effort away to give her side the lead.

After spending most of the first half on the back foot, the Bucs responded brilliantly in the second half. The defensive work of Pamela Penaloza (Bogota, Colombia) got the ball back in midfield for the Bucs and to the feet of playmaker Anjela Kricak (Krusevac, Serbia) just three minutes into the half. Kricak picked out a perfect pass to Sarah Connolly (Bollygowan, Northern Ireland) who collected it and pushed it out on her right foot from 30 yards out. The junior forward sent a rifling effort towards goal and into the far right corner of the net, giving the Catamount keeper absolutely no chance as Connolly’s third goal of the season tied the game back at 1-1.

Despite both sides creating chances in the final 40 minutes of regulation, neither side could mount a final attack and win the game in the 90 minute span. The Bucs headed to their fourth overtime of the season.

The extra time needed 15 minutes to find a decider. A foul near the box gave Western Carolina a free kick from just over 20 yards out. Stepping up to take the kick, Kate Swartwout laced an effort to the top corner, an effort unreachable from even an impressive performance from Buc goalkeeper Tess Mrozek (Johnson City, Tenn.) as the Catamounts walked away with all the spoils from the match.

After only one save in the first half by Mrozek, the sophomore put on a show in the second as she recorded seven of her eight saves in the final 45 minutes of regulation. Connolly paced the Bucs offensively with five shots, three on target and her spectacular effort.

The Bucs finish their non-conference schedule on Monday afternoon, taking on the Bulldogs of South Carolina State in a 4 p.m. kickoff.