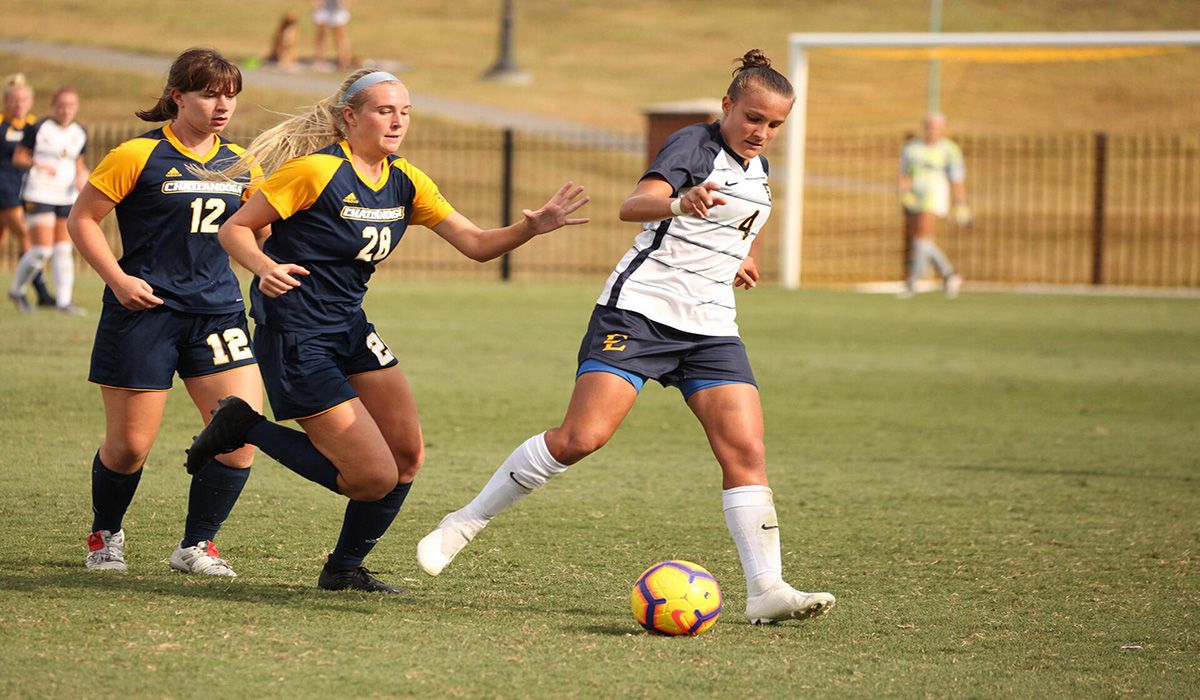 JOHNSON CITY, Tenn. (Oct. 6, 2019) – ETSU women’s soccer fell on the wrong side of luck in their 0-0 tie over SoCon foes Chattanooga on Sunday afternoon, hitting the crossbar on two different occasions in the conference matchup at Summers-Taylor Stadium.

Through the opening 20 minutes of action, each side settled for just one shot in the early going of the contest. Both sides battled for possession in the midfield while trying to grow into the contest in a hot afternoon at Summers-Taylor Stadium.

The Buc’s first real opportunity came from seemingly nowhere, as Sarah Connolly’s (Bollygowan, Northern Ireland) effort from outside the area troubled the Moc keeper, who needed a few attempts to collect the shot after the first attempt went through the goalie’s gloves. That turned out to be the best chance in a half that only had seven created chances, the Bucs holding a 4-3 advantage while both sides recording two saves.

As the teams came out for the second half, the game started to open up more as both sides looked to grab a decisive goal to hold on to. Again, the Bucs would outshoot their conference counterparts 9-6, being provided the best chances at grabbing a lead.

Just under 10 minutes into the second half, Elena Pisani (Milan, Italy) powered a header from Kendall King’s (Charlotte, N.C.) corner kick, missing the target by mere inches as it slammed off the crossbar before anyone could even react, the Mocs eventually clearing the danger.

Leisurely playing from out the back, Chattanooga gave the Bucs another quality opportunity as Moc goalkeeper Abbey Sadler lost possession of the ball and gave it away to Sydney Cavender (Scott Depot, W. Va) just inside of the 18 yard area on the penalty box. The sophomore rushed her shot and scuffed her one-on-one opportunity as she blasted the finish high and wide as the game remained scoreless with 17 minutes left to go.

Connolly had one of the final chances in the opening 90 minutes to open the scoring, receiving a beautifully timed through ball that put the junior behind the Moc backline by herself on the right side. The Northern Ireland native couldn’t square her body, and despite her beating the keeper with the effort, the ball trailed wide and went out for a Chattanooga goalkeeper.

Controlling the majority of the first 10 minutes of overtime, the Bucs nearly found the winner through another set piece. After drawing a foul just outside of the box, Pisani almost finished the game as well, hitting the crossbar yet again after connecting on the Beatrice Abati (Milan, Italy) free kick. The Mocs went straight through to the other side as Emily Szymanski had a one-on-one with Buc keeper Tess Mrozek (Johnson City, Tenn.). The sophomore rushed out of goal and did enough to force the shot wide and preserve her clean sheet. The Mocs had one more opportunity as time expired, a deflected effort landing on top of the netting as time expired and a second overtime being needed to try and provide a winner on the afternoon.

In the final ten minutes, both sides had two shots a piece as the game turned into an open affair, both teams sending numbers and crunching tackles as neither side were able to create an opportunity to take home a winner, settling for each’s third tie of the season.

Outshooting the Mocs 19-14, Connolly lead the Buccaneer attack with four shots, two of them on goal. Pisani, King and Abati all had three efforts as well, including two Pisani headers that hit the crossbar. Defensively, Mrozek and Co. held the Mocs out of their net for the fourth shutout of the season behind six Mrozek saves.

The Bucs make a trip to South Carolina next weekend, visiting Furman on Friday in a 7 p.m. matchup before taking on Wofford on Sunday at 2 p.m.