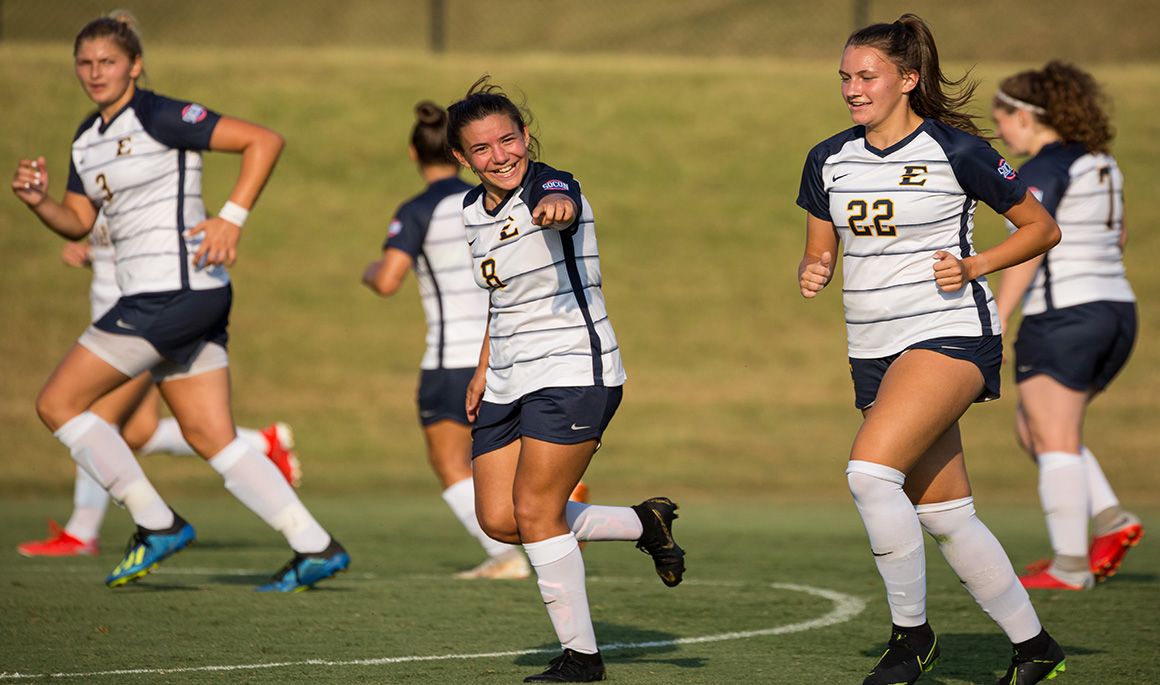 JOHNSON CITY, Tenn. (Oct. 10, 2019) – The ETSU women’s soccer team look to climb the SoCon ladder over the weekend as the team visits the Furman Paladins and the Wofford Terriers in conference action. The Bucs begin their conquest at Furman on Friday in a 7 p.m. affair before battling with the Terriers on Sunday, with kickoff scheduled to be at 2 p.m.

Opening the homestand with Samford last weekend, the Bucs saw themselves facing a 2-0 deficit just over 50 minutes into the matchup. The two goal Bulldog advantage was cut into just 25 seconds after scoring their second goal, as Anjela Kricak (Krusevac, Serbia) found Maegan Sours (Erie, Colo.) for her second goal of the season to halve the deficit. Summers-Taylor Stadium thought they saw an equalizer with two seconds remaining on the clock as Sarah Connolly (Bollygowan, Northern Ireland) netted an attempt to send the crowd into a frenzy. However, the ref blew his whistle as his assistant had the offside flag up on the far side in a narrow decision, disallowing the Buc goal and sending Samford away with a win.

ETSU had a positive response heading into Sunday’s matchup with Chattanooga as the defense frustrated the Mocs’ attackers while creating chances in the final third all afternoon. Any other day, the Bucs could have been on the favorable end of a flattering score line. Lady luck had other plans, as the Bucs crashed two headers off the crossbar and out, both from Elena Pisani (Milan, Italy) as the teams played out a 0-0 draw over the course of 110 minutes.

Both weekend contests can be streamed through SoCon Digital. The video and stat links will be provided below.

Providing consistency in the central defense, Elena Pisani (Milan, Italy) and Marina Bradic (Medvedja, Serbia) have partnered in all 13 matches for the Bucs in the backline. Kourtney Gaylord (Mooresville, N.C.) has been a regular on the right side, starting in every game but the win over Delaware State. Rafa Giuliano (Caserta, Italy) has been deployed in the midfield and on the left side of the defense while freshman Taylor Limprevil (Spring Hill, Tenn.) has started in four games in her rookie season. Tess Mrozek (Johnson City, Tenn.) provides the last line of defense for ETSU, safeguarding the ETSU net in all 13 starts for the Bucs on the season. The sophomore has been responsible for 3.5 shutouts on the year. The Buc defense has been a rather formidable one, having yet to concede more than two goals and ranking fourth in the conference in goals allowed average, a 1.08 clip.

Attributing an average of 0.70 goals per game, Anjela Kricak (Krusevac, Serbia) has been a creative force in the midfield after arriving late in the season, scoring two goals and creating five assists. Beatrice Abati (Milan, Italy) and Pamela Penaloza (Bogota, Colombia) have also provided two goals from their midfield roles. Kendall King (Charlotte, N.C.) has been the set piece taker, grabbing her two assists off of corner kicks for the team.

In the attacking three, the Bucs have grabbed 11 of their 20 goals from the two wide players and striker up top. Leading the team, junior Sarah Connolly (Bollygowan, Northern Ireland) has followed a season in which she scored eight goals with six so far in 2019. Maegan Sours (Erie, Colo.) and Momoko Horiuchi (Paris, Tenn.) each have tallied two goals and an assist from a wide position. Sydney Cavender (Scott Depot, W. Va.) opened her Buccaneer account against South Carolina State, scoring her first goal in Gold and Blue while grabbing two assists.

Furman sits on top of the SoCon throne three games in, joining Samford with a 3-0-1 mark in conference play. The Paladins own an 8-4-1 record overall, including a 4-1 mark at home. Furman rides a three game winning streak entering Friday’s contest outscoring opponents 6-1 in conference play while not allowing a goal in the last 352 minutes.

Populating the conference leaderboards, four Paladins hold a place in the top 10 in points amongst the SoCon. Kyndal Anderson leads Furman with seven goals and an assist for 15 points and tied second in the league. Both Jasmine Greene and Isabella Gutierrez have recorded three goals and six assists to share a tie for sixth, while Erin Houlihan rounds out the 10th spot with five goals.

Kellsey Weaver enters the matchup as the Paladin goalkeeper, making the start for her squad in all 13 games on the season thus far. The senior has a goals allowed average of 1.03, recording 37 saves while helping her team to six shutouts on the year.

Wofford enters the weekend one place above the Bucs on the SoCon totem, holding a 1-3-0 mark in the league with an overall record of 4-8-0. Wofford has a 2-2 mark at home, while recording the second worst goal differential in the conference with a -10 goal difference.

Katie Gilligan leads the Terrier attack, scoring more than half of their 13 team goals by netting seven and assisting on one. Her 15 points leads the team and is second in the Southern Conference. Gilligan has scored the game winner in three of their four wins. Six different Wofford players have scored the six goals not scored by the sophomore from England.

Using two goalkeepers throughout the season, Maria Mon has gotten the majority of playing time in between the poles for Wofford heading into the weekend. The sophomore has started and played in 10 contests, recording 55 saves in 849 minutes of action.

The Paladins hold an overwhelming 13-2 advantage in the series, the Bucs yet to record a win on the road against the side from South Carolina. ETSU won last year’s matchup at Summers-Taylor by a 1-0 margin, holding a 2-2 record against Furman over the last four games.

The Wofford matchup has been relatively equal throughout the series, each sides winning seven games with one draw between them. Since returning to the SoCon, ETSU holds a 4-2 advantage over the Terriers, outscoring them by a 19-5 margin. The last time the two met at Wofford, however, the Terriers got the better of the Bucs with a 3-0 result.