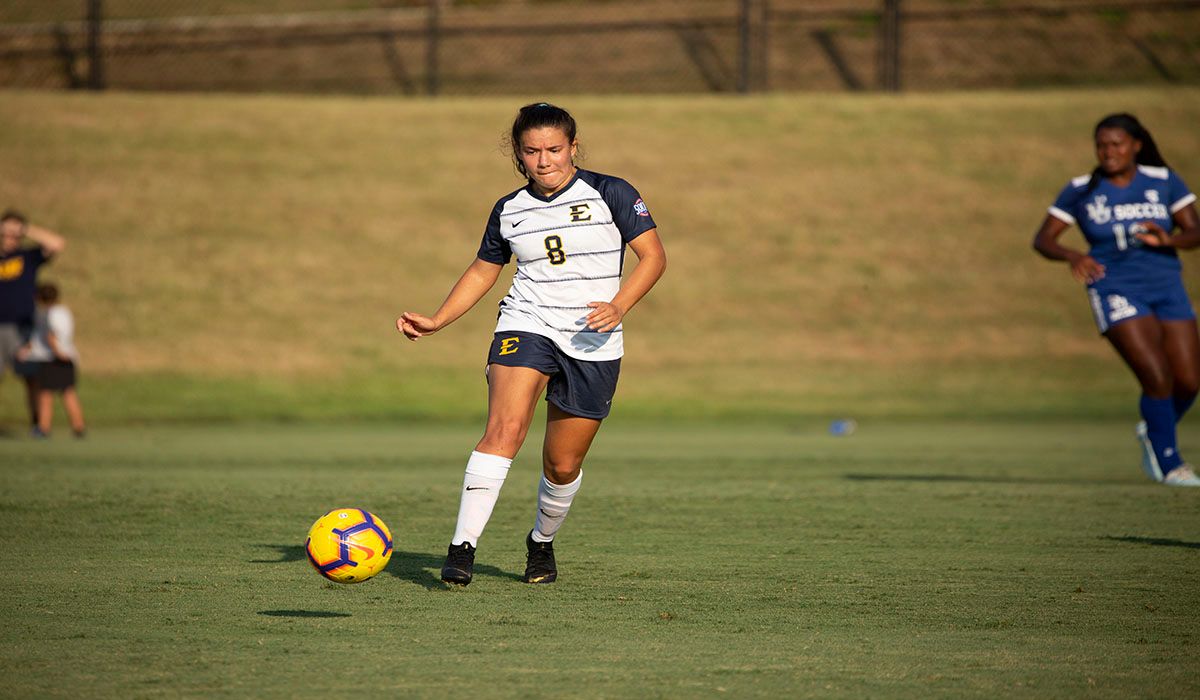 JOHNSON CITY (Oct. 18, 2019) – The ETSU Buccaneers women’s soccer team dropped a tough result on Friday night, falling to the Mercer Bears in double overtime by the final score of 2-1 in front of the Blue & Gold faithful. The Bucs controlled much of the game, but a couple of Mercer bounces saw ETSU fall to 4-9-3 on the season and 0-5-1 in Southern Conference play.

The Bucs jumped out to a strong start, testing Mercer’s Jordyn Ebert with two shots on goal in the first 10 minutes of action. ETSU broke through in the 15th minute as Beatrice Abati (Milan, Italy) found the back of the net for her third goal of the season. Abati’s strike was set up Anjela Kricak (Krusevac, Serbia) and Pamela Penaloza (Bogota, Colombia). Penaloza began the scoring threat with a delivery to the top of the 18-yard box, in which Kricak flicked the ball to Abati. The Italy native rifled a shot on goal off the bounce, finding the net for the early 1-0 Bucs lead.

Neither side truly tested the keepers after the opening goal as the Bucs held on to the one-goal advantage heading into halftime. ETSU nearly doubled its lead in the 48th minute as Sydney Cavendar (Scott Depot, W. Va.) crept through the back line and sent a shot flying off the left post.

The advantage remained in the favor of the Bucs until the 86th minute when Mercer capitalized on a rebound shot. Amaya Evans took the initial shot from 30 yards out that was saved by the fingertips of Tess Mrozek (Johnson City, Tenn.). However, Mrozek’s save bounced off the crossbar and right to the foot of the SoCon’s leading goal scorer, Nicole Icen. The freshman forward corralled the ball and placed it into the back of the net for the late equalizer.

Both squads played to a stalemate in the first overtime period before Mercer capitalized on the game-winning goal in the 104th minute of play in the second overtime. The Bears’ Abigail Zoeller delivered a corner kick into the ETSU six-yard box that was originally deflected by Penaloza. Unfortunately for the Bucs, Penaloza’s effort bounced right off the hip of Mercer’s Brie Pavol and into the back of the net for the 2-1 victory.

ETSU finished the match with 12 shots, including six on goal, while the Bears finished with 13 overall shots and five on target. Mrozek concluded the event with three saves.

The Bucs will be back in action on Sunday at 2 p.m. when they host The Citadel at Summers Taylor Stadium. Sunday’s contest will be the final home match of the season and will serve as Senior Day for the Bucs.

For More Information
ETSU fans wanting to receive Buccaneer news, score updates, in-game promotions and much more sent to their mobile device can do so by signing up for “Buc Updates.” Click here to sign up today!