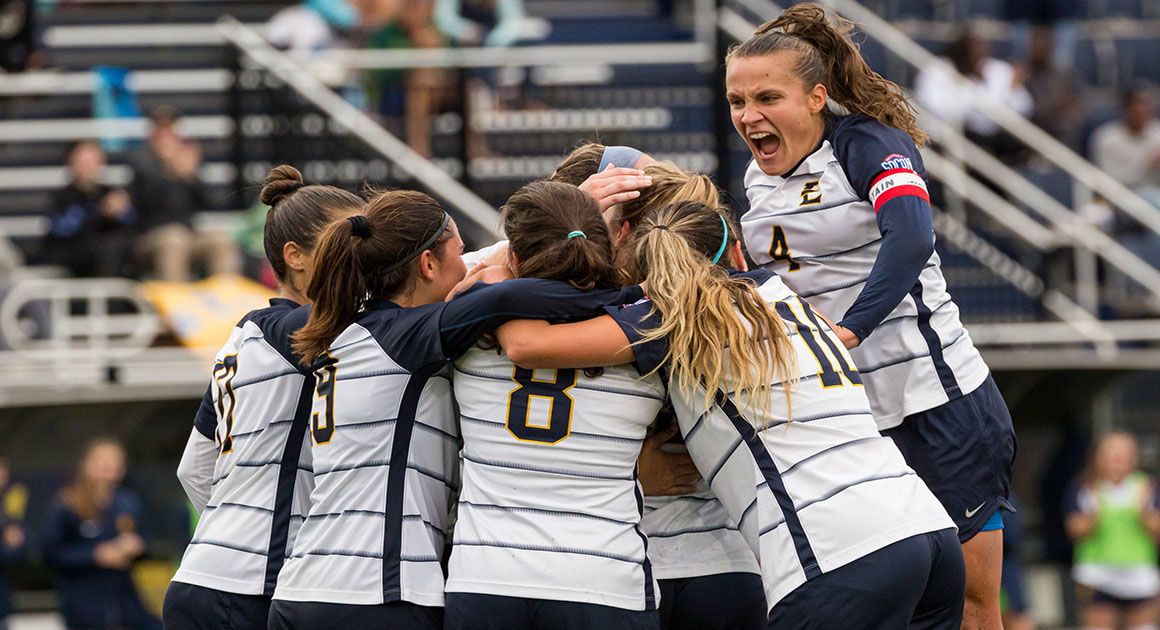 JOHNSON CITY, Tenn. (Oct. 20, 2019) – The ETSU women’s soccer team honored their seniors on Sunday afternoon, scoring three goals in their victory in Summers-Taylor Stadium over The Citadel in Southern Conference play in the final home match of the 2019 regular season. The Bucs moved to 5-9-3 on the season, tallying their first win in SoCon play to move to 1-5-1.

Before the Blue and Gold faithful could even be seated from the pregame senior day festivities, the Bucs entered the scoresheet just 87 seconds into the match. After a blocked shot, the Bucs recycled the play and found Giuliano lurking on the left wing from her defensive role. The junior sent a ball to the back post where Cavender attacked and volleyed it into the far netting to open the ETSU account.

After a 25 minute spell with both sides only attempting one shot that forced a save out of either keeper, the Bucs doubled their advantage with a little bit of magic from Giuliano. Cavender worked up the middle of the Bulldog defense before being taken down and fouled from a defender.

Giuliano stepped up to take the free kick on the right side of the attack, favorable for her powerful left foot. Leaving no chance for The Citadel keeper Brie Sikes, Giuliano blasted her effort into the far corner, wheeling off in celebration with no doubt that her first goal if the season added to the Buccaneer lead.

The Bulldogs responded eight minutes later in the first opportunity since the second goal. Suzuka Yosue placed her lay-off pass into the oncoming run of Maria Contreras, who blasted a 25 yard effort low and into the right side of the netting to give the Bulldogs some life heading into the second half.

Both defenses tightened up in the second half, each just allowing two shots from the opposing team in the first 35 minutes of the period. After forcing a foul near midfield, the Bucs grabbed their second goal off a set piece on the afternoon in the 82nd minute.

Kendall King (Charlotte, N.C.) continued strong display over the course of the season as the Bucs’ set piece taker. The redshirt sophomore found her third assist through a set piece, finding Sours on the back post as the winger raced past her defender and side footed her shot into the back of the goal, scoring her third of the season.

The Bucs finished the contest on the winning side of the physical matchup, a combined 32 fouls being called between the two teams. Despite losing the advantage in shots 12-8, the Bucs were more efficient, placing five of their attempts on frame while the Bulldogs only had two shots on goal. Tess Mrozek (Johnson City, Tenn.) remained relatively uninvolved for most of the afternoon, recording only one save on her way to her fifth win.

The Bucs finish their regular season schedule next weekend, travelling to VMI and UNC-Greensboro as they close out SoCon play. ETSU opens with VMI on Friday, October 25, scheduled for a 4 p.m. kickoff.