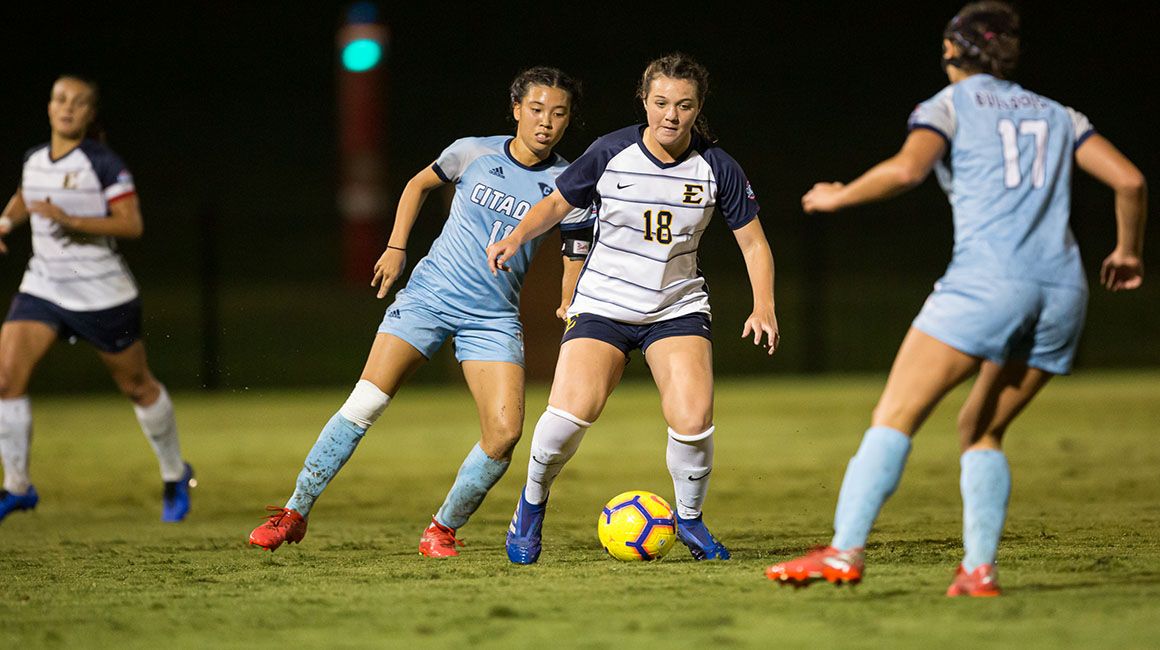 Bucs Bow Out in SoCon Tournament First Round To The Citadel, 1-0
The Citadel at ETSU | October 30, 2019
Related Links

JOHNSON CITY, Tenn. (Oct. 30, 2019) – The #8 ETSU women’s soccer team fell in what would be their final match of the 2019 campaign, dropping a heartbreaking 1-0 defeat to #9 The Citadel in the first round of the Southern Conference Tournament on a rainy Wednesday evening at Summers-Taylor Stadium.

ETSU applied pressure from the opening whistle, barely giving the Bulldog defense room to breathe while managing three shots in the first three minutes. The best chance came through Anjela Kricak (Krusevac, Serbia) who curled an effort outside of the box to the right corner as freshman goalkeeper Brie Sikes kept the Serbian’s attempt out of the net.

The Bucs continued the pressure throughout the half, as Kricak and Pamela Penaloza (Bogota, Colombia) both tested the goal. Sarah Connolly (Bollygowan, Northern Ireland) created the last chance of the half for the Bucs, trying to chip the Bulldog keeper from distance as Sikes creeped well off her line as the junior’s shot trailed wide.

Despite beginning as they ended in the second half, the Bucs were unable to grab a goal to establish their dominance through the first 60 minutes. The Bulldogs capitalized on the 0-0 score line in the 60th minute through Suzuka Yosue. The freshman forward flicked her effort from the right side over the oncoming Mrozek, hitting the left post and rolling in to give the visitors a 1-0 lead against the run of play.

ETSU came out of the stoppage with a positive response, forcing Sikes into five saves over the course of the next 15 minutes but still found themselves unable to pick the lock of The Citadel defense. A late surge of ETSU shots from Beatrice Abati (Milan, Italy) and Kendall King (Charlotte, N.C.) proved not enough as the Bulldog backline corralled and held on to their goal advantage, forcing Mrozek into a final save as the final seconds were ticking down on the clock to see out their win in the wet conditions.

An injury-depleted Bucs side saw the last action from four strong advocates of the Blue and Gold – three of which were four-year players for coach Adam Sayers. Elena Pisani (Milan, Italy), Kourtney Gaylord (Mooresville, N.C.) and Allie Duggan (Boca Raton, Fla.) said their goodbyes to the dedicated Bucs fans who rode out the wet conditions in support, while graduate transfer Pamela Penaloza (Bogota, Colombia) ended her career representing the Blue and Gold in a dedicated fashion.

No. 9 The Citadel advances to face the top seeded Samford in the SoCon Quarterfinal set for Saturday afternoon.