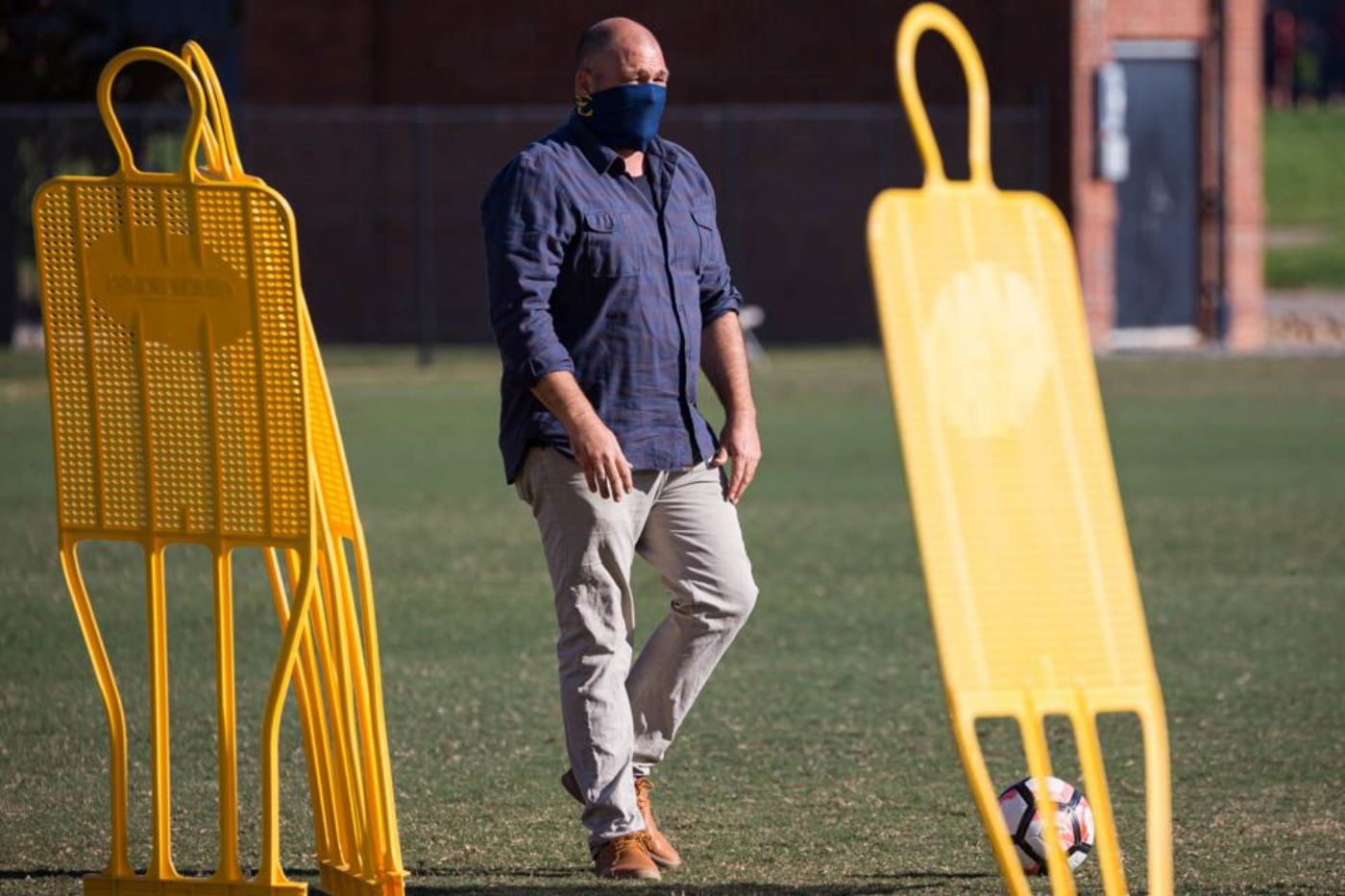 Yelton brings in his second recruiting class in his early time at the helm of the Buccaneer squad, adding a wave of seven freshman to the 2021 class.

“We are really excited about the group of players we have added to our team,” said Yelton. “I believe these players will make a significant impact on our program and will help us compete for championships. Our staff did a great job of identifying players and showing them the quality that ETSU has to offer and I believe that we are positioning ourselves to be a successful program.”

Reinforcing the midfield, the Bucs bring in four freshman to help impact the middle of the pitch. Joining Tennessee native Lindsey Cook (Greeneville, Tenn.) is the first ever Buccaneer recruit from The Empire State in Alexis Gibbons (Olean, N.Y.). Twin sisters Noxolo Cesane (Cape Town, South Africa) and Sinoxolo Cesane (Cape Town, South Africa) also join the squad, bringing international experience having represented their country at both the youth and the senior level.

Kerry Beattie (Lisburn, Northern Ireland) finalizes the international component of the early additions to the 2021 class, helping lead the lines in the attack. Sydney Somogyi (Germantown, Tenn.) bolsters the defense while Rhyan Connolly (Canton, Ga.) joins the goalkeeping corps to round out the class.

Coming across the Atlantic Ocean, Noxolo Cesane has made a rise in the South African game. Playing for Cape Town Roses in the Sasol Women’s League, her and her sister Sinoxolo have been climbing the youth teams of the Banyana Banyana (South Africa’s Women’s National Team), where Noxolo has made her debut on the senior team. Noxolo was a debutant for her country in the 2019 Cosafa Women’s Championship, coming on for the second half of a 17-0 win against Comoros. Her second appearance saw her net her first international goal, scoring in a 3-1 win against Malawi. She brings her international experience and leadership to the Buccaneers, having won the Cosafa Women’s Championship in 2019.

Quote from Yelton - “We have signed one of the best young players in Africa to join us. She has played at an extremely high level and has already enjoyed success with the full national team for South Africa. She is a joy to watch play and her skill and ability to break down teams will be another added asset to our arsenal of attacking players.”

Part of an electric duo exciting the South African women’s national team, Sinoxolo joins her sister to represent the Blue and Gold. Playing for Cape Town Roses in the Western Cape Sasol League, Sinoxolo has represented her national team on a variety of levels, including her introduction to the U17 team at just 15 years old. She was also the youngest on the U20 team when she joined at just 16years old. In 2013, Cesane helped her side win the Western Cape Sasol League. In 2014, Cesane did a treble by wining the Sasol Women’s League, the Coke Cup and the National League Play-offs. Cesane was also part of a South African U-20 team that was the African Union Sport Council Region 5 Championship.

Quote from Yelton - “One of the attributes that stands out about Sinoxolo is her ability to impact the game in so many ways. She can attack, she can defend, and she is fearless. She should make an immediate impact on our ability to compete in the SoCon.”

Connolly comes to ETSU as part of a family of athletes, both her mom and dad playing collegiate athletics at Hartwick College. A two-time letterwinner for Sequoyah HS, Connolly also provided success while manning the posts for her club team as well. Qualifying for the Georgia 6A State Championships in 2018, Connolly has also helped her Georgia Impact 01/02 Elite club to a variety of success. In 2018, Connolly and Co. won the Athena-A U18 Championship and were crowned Piedmont Region NL U19 Champions in 2019. That success was followed with a Georgia State Cup U19 Championship before recording a semifinal appearance in the U19 Southern Regionals.

Quote from Yelton - “Rhyan is a great addition to our goalkeeping corps. She is strong and athletic, can dominate in the air and is quick off her line. We believe we have picked up an excellent goalkeeper for our team with adding Rhyan to the squad.”

Securing the signature from a local product, ETSU is getting the Region 1-AA Player of the Year and a State Champion in Lindsey Cook. A presence in the midfield, Cook just finished her senior season with 28 goals and 11 assists on her way to becoming a district, region and state champion. This is the second season Greenville swept districts, regionals and state after a 2019 season where Cook won TSSAA D1-AA All-District and All-State honors after scoring 12 goals and seven assists. Cook was a state semifinalist her sophomore year and a state runner-up in her rookie campaign, never finishing a season with fewer than 11 goals. Accolades came in her early high school career as well, earning her first D1-AA District 1 Offensive Player of the year as a sophomore as well as a TSSAA Class AA All-State Selection. Her junior season proved equally successful, earning TSSAA D1-AA All-District First Team honors and a THSSCA D1-AA All-State Team Selection. Cook comes to the Bucs with 64 goals and 31 assists notched under her belt.

Quote from Yelton - “We are excited about Lindsey joining us at ETSU. She is a local talent that we believe can come in and compete right away. In watching her, she can dominate games with her passing and ball striking, and is also a threat to score from a deeper midfield position. We are excited that a local product like Lindsey chose ETSU.”

A five-year starter for the varsity team, Gibbons has been a mainstay in the Olean lineup in her high school career. A two-year captain, Gibbons made All-Conference honors in each of her first four seasons, including a Rookie of the Year in 2016 along with CCAA First Team All-Star selections in 2016 and 2019. Alexis helped her side to a Section VI Class B1 Championship in 2018. A constant attacking threat, Gibbons sits on 57 goals and 46 assists for her high school squad and earned an All-State Class B Team Selection in 2019. Alexis also plays club soccer for Western New York Flash Academy, earning All Western New York Second Team honors in 2019. Alongside her individual success, Gibbons has helped her club side to a State Cup Championship in 2015 along with an ECNL Ohio Valley Conference Championship in 2018. Her senior season is still progressing.

Quote from Yelton - “Lexi is a quality midfielder who is good on and off the ball. She has excellent vision in possession, but also is very good in her movement off the ball. She is another player who can operate in multiple positions and has all of the qualities to be successful right away.”

Part of a dominant Houston High School program who has won eight state titles, Somogyi was a part of their two TSSAA Class AAA State Championship teams that went for a combined 46-2. Sydney earned the role of Varsity Captain for her team in 2020, earning Houston HS Defensive MVP four straight years. Somogyi was part of the 2017 team that was named as National Champions by USA Today, earning 2019 and 2020 Memphis Area Watchlist honors as well as Houston High School 2019 D1 All-Metro selection. Her high school side is 76-5 in her career, Sydney helping record 53 shutouts in those games in the defense. Somogyi also played club soccer for 02 Lady Lobos Premier, two time D1 Tennessee State Champions and a 2017 finalist.

Quote from Yelton - “It is important that we recruit some of the best in-state talent that we can, and we are very proud that Sydney is choosing to be a Buc. She is very good defender that also knows how to start the attack for our team from her center back position. She has been a part of championship level teams wherever she has played and I can’t wait to see her on the field for us.”

Beattie joins an already heralded class with an attacking mindset. The Northern Irish native brings pace and quality to the attack, having represented and captained the U17 Northern Ireland team at European Qualifiers in Greece. Beattie has represented her country at the U16, U17 and U19 levels while netting four goals, and is set to join the senior squad in games against Belarus and the Faroe Islands later this month. On the club level, Kerry earned Young Player of the Year for her side in 2019, coming just years after earning top scoring honors in 2017 for her U17 club side. In her bright young career already, Beattie has been crowned Irish Cup Champions, Toals County Antrim Cup and League Cup Winners in 2019 for her Glentoran FC team.

Quote from Yelton - “Kerry is a proven goal scorer out of Northern Ireland who has all the qualities to be a successful player in the SoCon. She is quick, skillful and has a knack for getting the ball in the back of the net. She also is a fantastic student and has high aspirations for her career. I think Kerry is going to be a player that our fans love to support.”