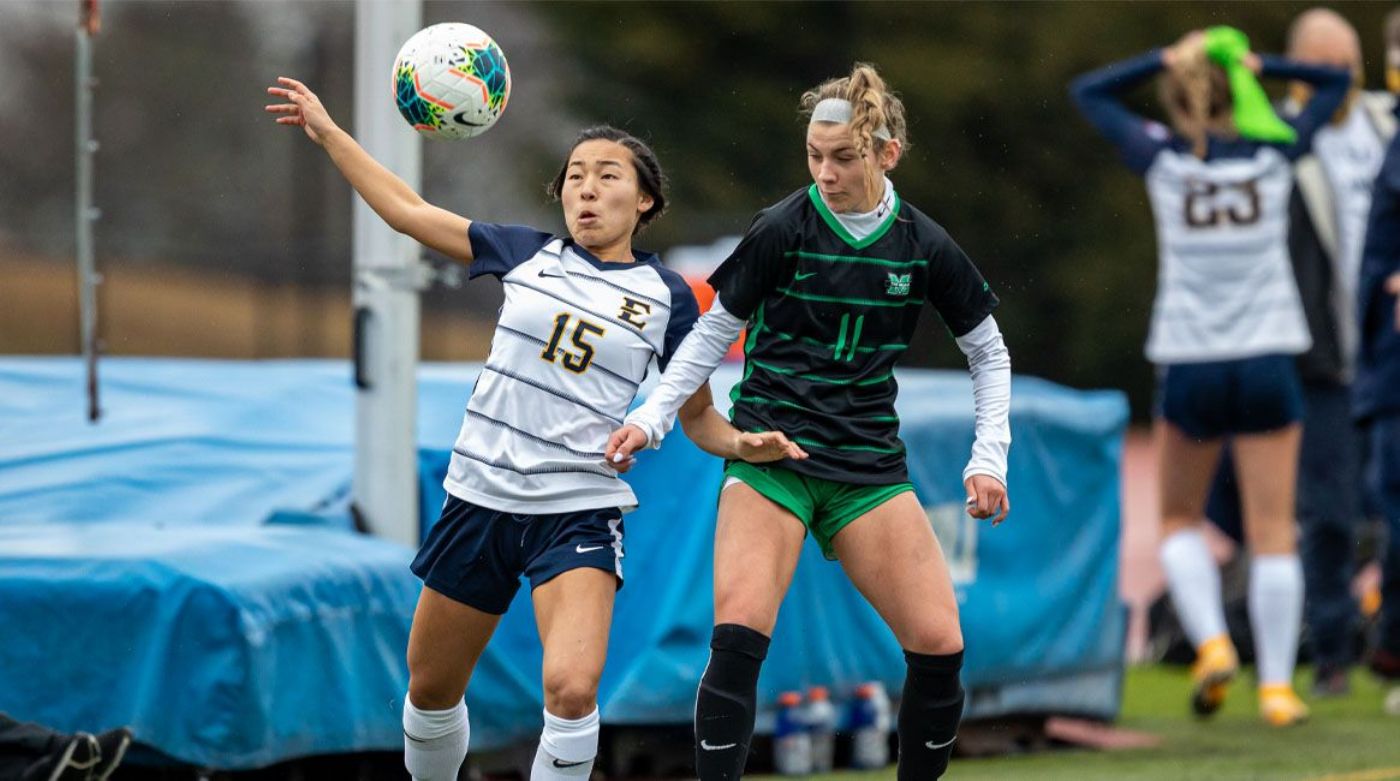 Unfortunately, the Bucs fell on the wrong side of a game winning goal in the final minute of the first overtime period, Marshall escaping with a 2-1 win at Kermit Tipton Stadium.

ETSU Head Coach Jay Yelton made his long awaited coaching debut, but only found out six hours before game time it wouldn’t be in the friendly confines of Summers-Taylor Stadium on campus. Due to a waterlogged pitch, the Bucs were forced to pick up and play at Science Hill High School, battling weather and field conditions in the match against the Thundering Herd.

Both coaches had their Division I debut on Saturday, Yelton’s first game at the helm of the Bucs spoiled by Michael Swan’s first win at the DI level.

ETSU was edged in shots by Marshall 13-12, while the Bucs put seven on frame compared to the Herd’s six.

The physical contest included 28 fouls, 15-13 in favor of Marshall.

Both teams familiarized themselves on the foreign turf terrain of Kermit Tipton, the visitors acclimating themselves first in the opening minutes. Marshall’s Olivia Gandee struck a shot off the crossbar in the eighth minute with the first test from either side. The Herd grabbed the opening three shots before Horiuchi recorded the first shot for the Buccaneers at the 25th minute. Merrin Gilmer (Johnson City, Tenn.) followed suit a minute later, forcing Marshall keeper Courtney McVicker to come up with an equalizer to the low drive to her right. Sarah Connolly (Bollygowan, Northern Ireland) tested the keeper once more at the 28th minute, the last shot of the period for the Bucs and last real chance from either side of the half.

ETSU produced the first moment of frenzy in the second half after Raffaella Giuliano (Caserta, Italy) whipped in a shot from outside of the box off a set piece, slamming into the crossbar before going out for a free kick. Just five minutes later however, the Herd grabbed the opener. Marshall’s Morgan White flicked a cross into the path of Abi Hugh, who made no mistake and gave no chance for freshman keeper Ashton Blair (Knoxville, Tenn.).

An almost immediate response came directly after, the Bucs needing just two minutes to get on the board in the 58th minute. A driving run by Horiuchi saw her in acres of space, picking out Kricak perfectly as the Serbian sophomore poked her effort past the oncoming keeper, leveling the score.

Marshall had the best chance of finding the winner in regular time, a mistake in midfield leaving Iselin Noevik one-on-one on goal. Blair stood tall, the freshman besting Noevik and making the diving save to keep the Bucs level with just over a minute remaining in regulation.

With the Bucs being familiar with overtime after six games last season needing extra time to find a victor, ETSU neared grabbing the decider six minutes in. Kricak almost doubled her tally, ripping a ball from outside of the 18, beating the goalkeeper before narrowly missing the left post as the Buccaneer bench thought it had snuck in. The missed chance led to a Marshall attack, and with just 40 seconds on the clock, Giuliano’s clearance was blocked by a Marshall attacker. The ball dribbled to the front of the goal where Kendall King (Charlotte, N.C.) was quickest to react, clearing the ball wide to get rid of any apparent danger. Hugh was first to it for the visitors as the forward latched at a shot from the tightest of angles to beat Blair at the near post, giving the Herd a 2-1 win with just 38.5 seconds remaining in the overtime period.

The Bucs are back at Summers-Taylor next Friday, taking on Lipscomb in a 3 p.m., March 19 showdown.