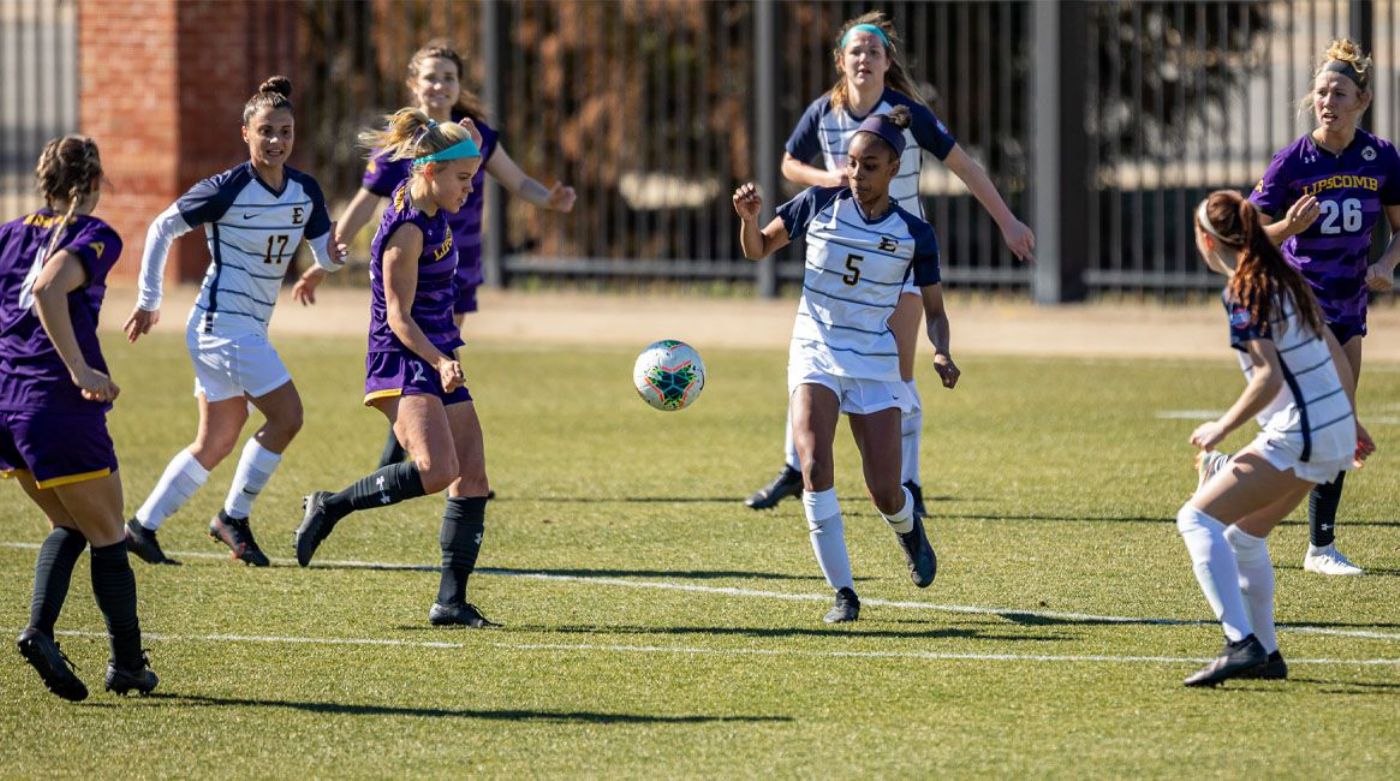 Limprevil goal in the 68’ minute not enough against Bisons

JOHNSON CITY, Tenn. (Feb. 21, 2021) – Despite a sensational strike from Taylor Limprevil (Spring Hill, Tenn.), the ETSU women’s soccer team was unable to overcome an opportunistic Bisons offense in a 2-1 loss to Lipscomb inside Summers-Taylor Stadium.

The weather provided almost opposite of what the season-opener held for the Bucs, a sunny February Sunday allowing ETSU to open their season inside Summers-Taylor Stadium after having to move their contest against Marshall due to a waterlogged pitch.

The Bisons dominated the Bucs in the attack, outshooting the Blue and Gold 25-2 in the contest, including an 11-2 advantage in shots on goal.

Ashton Blair collected nine saves for ETSU, more than doubling her four she made in the season-opener against Marshall.

Taylor Limprevil scored her first collegiate goal of her career, picking the ball up near midfield before firing a 25 yard effort into the side netting for the Bucs. Both goals this season for ETSU have been scored by a sophomore.

Lipscomb was judged offside on nine different occasions, ETSU only flagged once.

Head Coach Jay Yelton’s wait for his first win at the helm of the Blue and Gold continues, next getting a chance in the conference-opener against UNCG.

The visitors started off on a positive foot, launching a shot in the opening three minutes that deflected wide for a corner kick. Freshman goalkeeper Ashton Blair (Knoxville, Tenn.) was later called into action twice in two minutes, including an outstretched fingertip save to push an oncoming Bisons shot over the bar.

In the 21st minute, the Lipscomb pressure finally undid the Buccaneer defense. Kaitlin Echols picked up a loose ball in midfield and launched it over the Buc backline. Lipscomb’s Molly Grant raced onto it, pushed her first touch past an oncoming Blair and slotted it home into an open net to give the visitors an opening lead. Lipscomb’s pressure continued, part of an opening half that saw the Nashville side record 10 shots, forcing Blair into four saves. ETSU was held without a shot in the opening 45 minutes, heading into half time looking for adjustments down 1-0.

The Bucs came out of the second half more positive, grabbing their first shot of the contest through Maegan Sours (Erie, Colo.) who ripped an effort from 23 yards out to test the Lipscomb goalkeeper in the early stages of the half. The Bisons grabbed the next best chance, launching a quick counter that saw Cami Rogers pull her shot wide. It would be Kelli Bieler who doubled the tally for the hosts, Grant laying off a cross in the box into the path of the midfielder who gave Blair no shot with a strike to the side netting in the 58th minute.

Looking as if they were on their way to a comfortable victory, Lipscomb fell victim to a quickfire counter from the Bucs. After holding the ball up, Sarah Connolly (Northern Ireland) laid the ball off to Limprevil near midfield. The defender weaved in and out of Bisons defenders before letting launch a shot outside of the box, striking the back of the net to cut the deficit back to one.

The momentum seemed to shift to the Bucs’ favor, but a barrage of opportunities from Lipscomb kept the ETSU attack at bay, giving rare chances for the Bucs to get numbers forward. Lipscomb was able to kill the game the last 10 minutes, hardly anything entering their defensive third as the visitors were able to walk off the pitch of Summers-Taylor with a 2-1 win.

The Bucs get nearly two weeks of a break before coming back to action, hosting UNCG in the SoCon opener at Summers-Taylor Stadium. The game is scheduled for March 5th in a 3 p.m. contest.