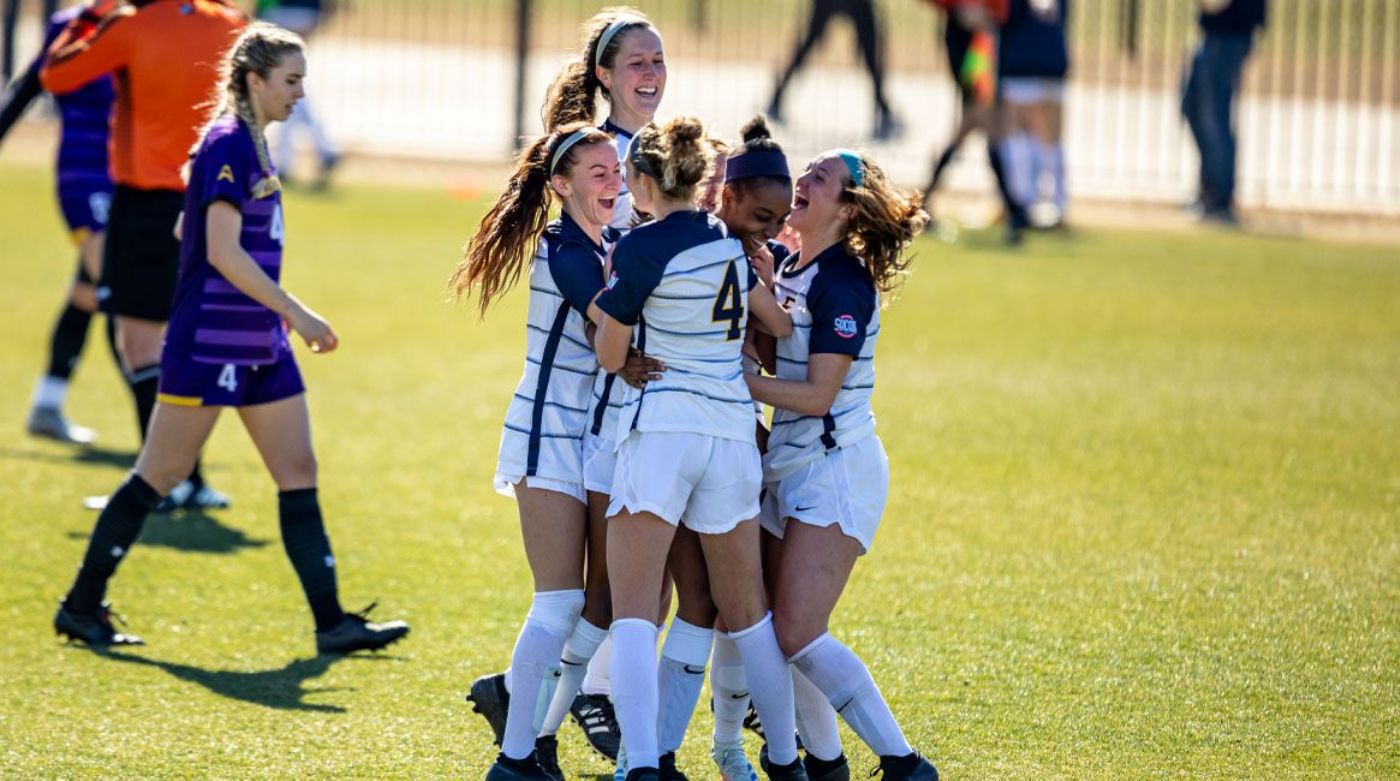 JOHNSON CITY, Tenn. (March 4, 2021) – With nearly a two-week break between the non-conference finale and the conference opener, a refreshed ETSU women’s soccer squad hosts both UNCG and VMI in weekend action at Summers-Taylor Stadium.

Having yet to leave Johnson City, ETSU has had the luxury of preparing on their home field for the first month of the season before finally heading on the road next weekend.

The Bucs faced a strong Lipscomb side two weeks ago, the Bisons coming off a shock loss to DII side Lee University. Outshooting the Flames 17-5 in their opener, Lipscomb followed suit with a 25-2 advantage in shots over the Blue and Gold. Despite the discrepancy, ETSU found the net trailing by two goals in the 68th minute through Taylor Limprevil (Spring Hill, Tenn.), who scored her first goal of her collegiate career. Pressuring the Bisons defense the next 10 minutes, the visitors grabbed control of the game, killing off any chance for a Buccaneer comeback to see the hosts drop to 0-2.

The Bucs are set for action on ESPN+ for both the Friday and Sunday matchup against the Spartans and Keydets. Buccaneer Sports Network’s very own Jay Sandos is on play-by-play for the call on Friday, Mike Gallagher returning to post in Sunday’s action.

After 15 months without playing a game and adjusting to new philosophies and styles, the Bucs are implementing their new system under first year head coach Jay Yelton. After a heartbreaking overtime loss to Marshall and a 2-1 defeat to Lipscomb, the Bucs are still searching for the opening win in the Yelton era.

With the loss of Pamela Penaloza (Bogota, Colombia) in the opening game of the year, the Bucs have a newly transformed line comprised of Buccaneer veterans. Kendall King (Charlotte, N.C.) and Raffaella Giuliano (Caserta, Italy) look to solidify a backline for the Bucs. Operating out wide, Limprevil has added a goal from defense in her two starts.

Sarah Connolly (Bollygowan, Northern Ireland) looks to get her scoring mark underway on the weekend, entering the season with 16 career goals for the Blue and Gold (10th in program history). Andjela Kricak (Krusevac, Serbia) provides the lone goal in the Buccaneer attacking options, building off a freshman season in which the midfielder tallied two goals and six assists.

After falling to High Point 2-0 in their season-opener, the Spartans responded by shutting out ACC foes NC State in a 0-0 draw, earning goalkeeper Aiyanah Tyler-Cooper SoCon Defensive Player of the Week accolades. The draw ended a three-game win streak for the Wolfpack.

Entering the season picked third in the conference, the Spartans are led by their solo selection to the Preseason All-Conference Team in Kayla Campbell. The defender enters her third year for UNCG, earning a Second Team All-SoCon Team selection last year after leading the league in goals from defense with five. Kaley Tucker also returns to the midfield, leading the Spartans in minutes played last season on her way to All-SoCon and SoCon All-Tournament honors. UNCG continue to look for a replacement for 2018 SoCon Player of the Year and top-scorer last season for the Spartans in Cianna Rideout. Nicole Souply returns as the leading scorer returning from last year’s roster with five goals in 2019.

The Keydets enter the weekend undefeated before their matchups against the Catamounts and Buccaneers. After a 5-0 road victory against Southern Virginia, VMI continued their road trip with a 1-1 double-overtime draw over the Davidson Wildcats. The Keydets enter their weekend series with their third and fourth-straight road contests before heading back to Lexington, Va. for their first home series of the weekend.

Leading the way for the Keydets has been Whitney Edwards Roberson and Kiley Cropper, both registering two goals and an assist for VMI. Maggie Beckman also enters with two goals on the season. Sidney Swoope has been the main shot stopper for the Keydets this season, registering six saves in 135 minutes of action. The senior has a combined shutout on the year along with a .857 save percentage.

ETSU’s contest against UNCG marks the 19th in the series history, the visitors leading 13-5 in head-to-head competition. ETSU looks to build on their 2-5 record inside Summers-Taylor Stadium.

On the contrary, the Bucs boast a 5-1-1 record against the Keydets, including a perfect 4-0 tally when playing in Johnson City. ETSU will look to boost the series advantage on the Sunday matinee matchup.