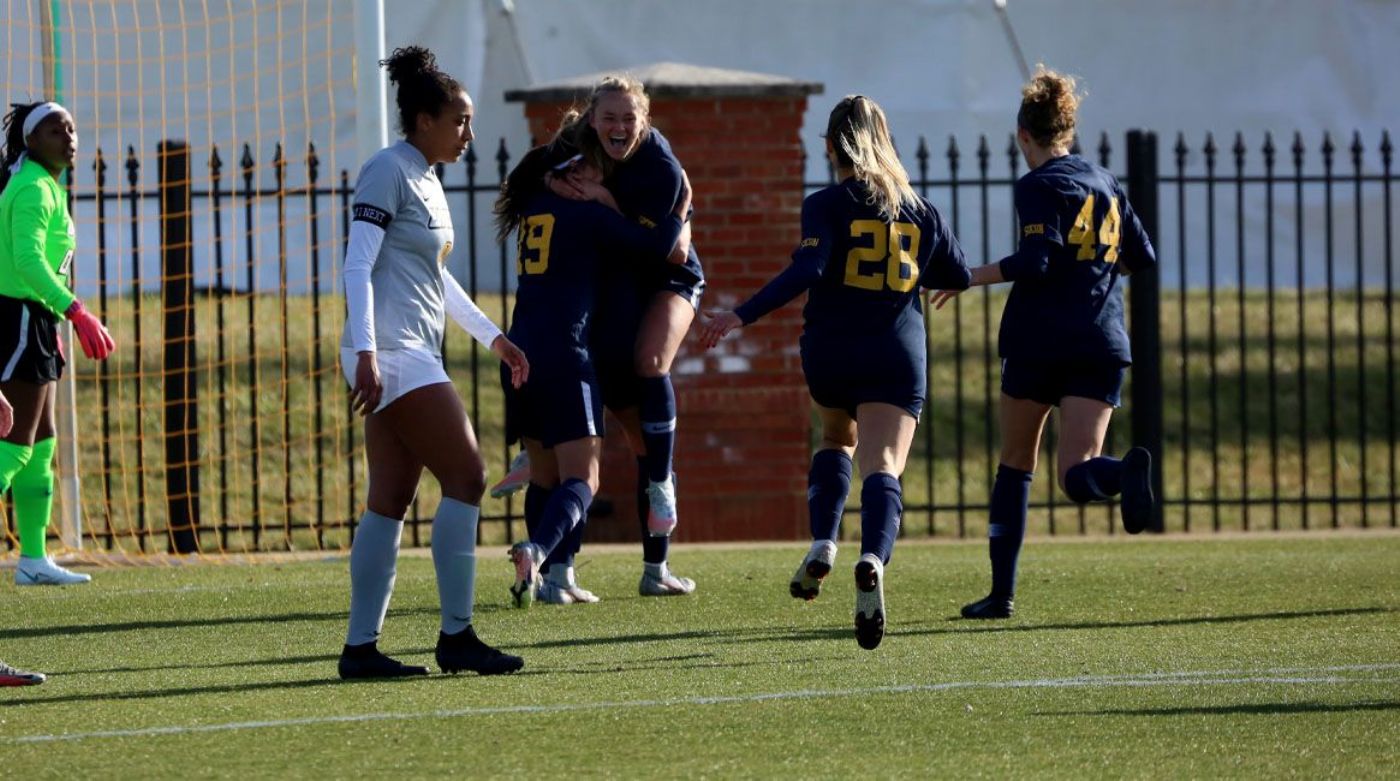 JOHNSON CITY, Tenn. (March 5, 2021) – Even in an afternoon game, the Buccaneer faithful were treated to some fireworks as two sensational strikes from ETSU gave the Bucs an opening win at Summers-Taylor Stadium in Southern Conference women’s soccer action on Friday afternoon.

Conceding the opening goal, the Bucs turned to two veteran players in Kendall King (Charlotte, N.C.) and Maegan Sours (Erie, Colo.) to overturn their losing position in the second half, both scoring their first goal of the season en route to a 2-1 masterclass in front of a rambunctious audience at Summers-Taylor.

ETSU grabs the first win of the Jay Yelton era in exciting fashion. Entering the contest trailing 13-5 in the overall series, the Bucs get their sixth win over the Spartans in program history in Yelton’s first attempt, starting off conference play undefeated.

Only three games in, the Bucs had their best offensive output to date. Scoring twice, a season-best, ETSU also produced a season-high 16 shots, six shots on goal and outshot their opponents for the first time this year, a 16-10 advantage.

Two of the three goals came off set pieces, highlighted by a 35-yard strike from King to level the score on the other side of halftime. UNCG’s lone goal came off a free kick.

ETSU had a season-high in corners taken with six, conceding just two to the Spartans. The Bucs were also less penalized, conceding seven fouls to the 10 from UNCG.

King’s strike marks the first goal wearing the Blue and Gold, the redshirt-junior playing in defense for the first time in her career this season. Sours’ strike registered her seventh goal as a Buccaneer, second-highest on the team.

After a slow start to the game, the Spartans produced the first piece of action as the UNCG attack raced past the Buccaneer defense down the right-hand side of the field, forcing Raffaella Giuliano (Caserta, Italy) into a yellow card-worthy tackle to give the Spartans a free kick right outside of the 18 yard box. The visitors took advantage as Ashley Avelino met the Hannah Morton cross and tucked the finish past Ashton Blair (Knoxville, Tenn.) for the first goal of the game in the first shot of the game.

The Bucs looked to immediately respond, two great chances by Emma Arnold (Bristol, Tenn.) and Sarah Connolly (Bollygowan, Northern Ireland) going astray after UNCG defenders threw themselves in front of the shot to parry it from their net. The Blue and Gold once again looked the more dangerous of the tie as Taylor Limprevil (Spring Hill, Tenn.) weaved her way down the right side of the field before putting a cross on a platter to an onrushing Andjela Kricak (Krusevac, Servia). The Serbian sophomore extended fully to meet the cross with her head and glanced her attempt excruciatingly close to the left post, but too wide as the Bucs remained off the score sheet. The Bucs were faced with an eventual one-goal deficit with the half-time whistle approaching, entering trailing by a goal for the second time in as many games.

ETSU didn’t have to wait long to find an opportunity on the other side of the break, taking advantage as the Blue and Gold leveled the score just three minutes into play. After a foul gave the Bucs a free kick inside 40 yards, King stepped up and lined herself up for a strike on target. The Charlotte native’s seemingly audacious effort never lost altitude, sailing into the top right corner for an untouchable effort that sent the crowd wild as the Blue and Gold celebrated near midfield.

The goal completely shifted the momentum of the game, ETSU nearly grabbing another less than a minute later as Sours struck the ball clean, beating the UNCG keeper but slamming into the crossbar to give the Spartans a break. Sours again called her own number in the 61st minute, Jocelyn Nehls (New Richmond, Ohio) beautifully spraying a left-footed pass to send Sours into acres of space on the left hand side of the pitch. The closest UNCG defender overcommitted, Sours shifting the ball onto her favored right foot as she ripped a shot from outside of the box. This time the effort found the top netting after beating Aiyanah Tyler-Cooper, the whole team sprinting to join in the celebration as ETSU took their first lead of the season on Sours’ first goal of the campaign.

With the game approaching to full-time, Coach Yelton instructed his players to sit deeper and try and break on the counter, forcing the Spartans to take efforts from range that for the most part left the freshman keeper untroubled. The closest opportunity for an equalizer came in the 88th minute as Kaley Tucker ripped a shot past Blair but just wide of the post. Two clean saves from Blair in the final two minutes and great hold up play up top ensured that ETSU walked off the pitch at Summers-Taylor after the full-time whistle as victors, defeating the Spartans in the opening game of the Southern Conference campaign, 2-1.

The Bucs turn around quickly to defend Summers-Taylor Stadium, facing VMI on Sunday in a 1 p.m. showdown.