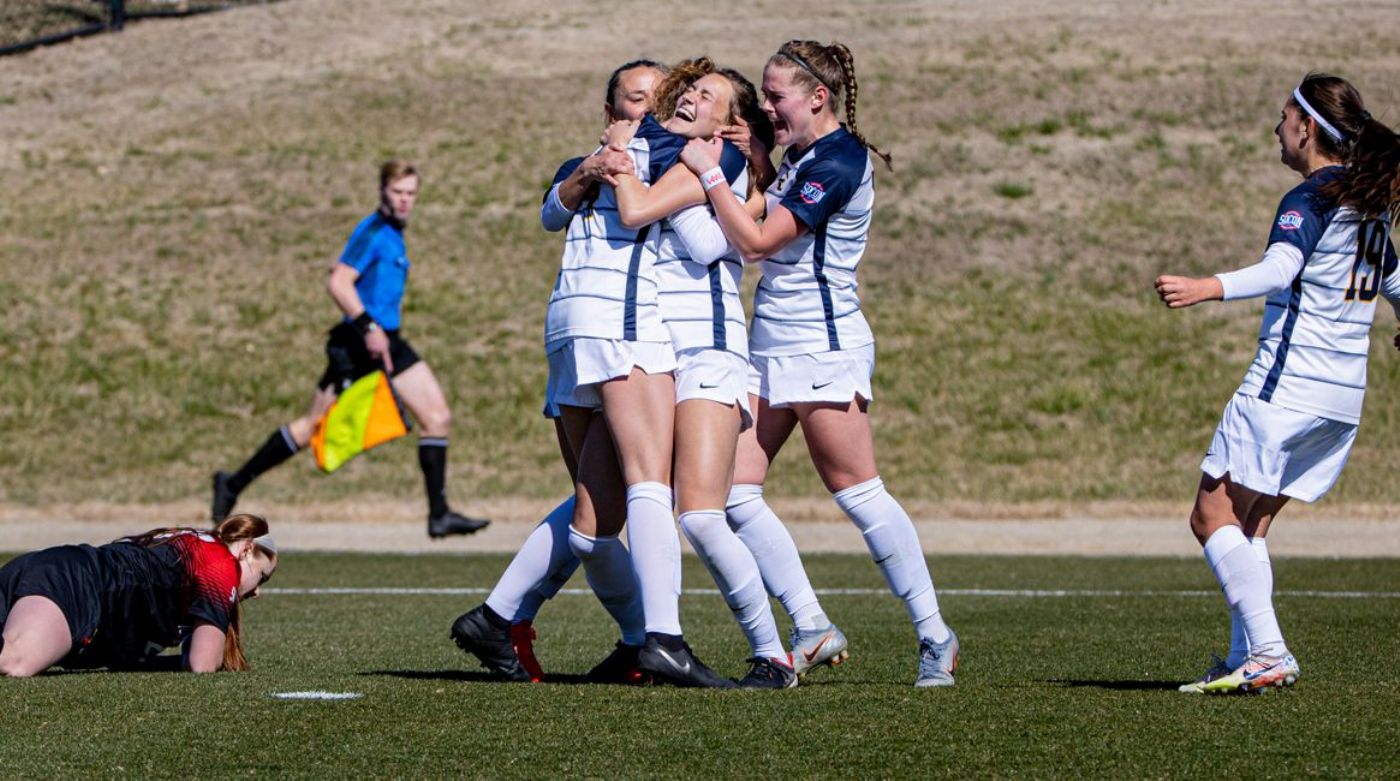 JOHNSON CITY, Tenn. (March 7, 2021) – The Bucs have shown early in the season that they are full of resolve. In no different fashion, the ETSU women’s soccer team recovered from a losing position to eventually settle for a 1-1 draw in double-overtime to the Keydets of VMI.

Another pristine day at Summers-Taylor Stadium, the Bucs faced their second game in three days when hosting VMI, their quickest turnaround in between games after playing just three games over the course of 19 days to begin the season.

With the caution of fatigue, ETSU head coach Jay Yelton made six changes to the side that started against the Spartans on Friday, looking for fresh legs to make an impact on the game. It was the Keydets who proved to get the best of the early match, grabbing an opening goal under 10 minutes into the game.

As seemingly been a common theme this season, the Bucs had a positive response to the goal, soon attacking the Keydet third in an attempt to equalize. ETSU had to wait until early in the second to get their retaliation through the right leg of Jocelyn Nehls, (New Richmond, Ohio) as the sophomore grabbed her first of the season. Despite peppering the VMI goal throughout the rest of the match, the Blue and Gold couldn’t get the next one past the Keydet keeper and were forced to settle for a draw after full time in front of the Buccaneer faithful.

The Bucs settled for a draw in their second overtime game of the season, moving to 0-1-1 in games that are forced into extra time. ETSU now has gone 11 games in overtime without a winning result, moving to 0-7-4.

For the second-straight time this season, the Bucs outshot their opponents as they took a 20-12 advantage in attempts on the afternoon.

ETSU finishes their four-game home stand to begin the season 1-2-1. The Bucs are 1-1-1 when playing on their home pitch at Summers-Taylor after the opening day against Marshall was moved to Science Hill HS.

The Bucs grabbed a season-high eight corners, slightly holding the edge to the six conceded to the Keydets. ETSU was whistled for 15 fouls, just 11 for VMI.

Both keepers finished with four saves, the third time in four games that ETSU has made four saves.

The visitors raced to a quick start, needing only seven minutes to grab the opening goal in the Sunday matinee. After applying early pressure, the Keydets made it pay off as Sarah Anschutz provided a half-cross, half-shot from 30 yards out that found its way through a host of bodies in the 18 yard box. With suspicions that it would travel just wide, Gabby Criscione was first to react and readjusted the shot back on target to slip past the Buccaneer keeper.

Only a minute later, the Bucs forced the VMI goalkeeper into action as Sarah Hill (Sommerset, England) forced Sidney Swoope onto her right side to keep the visitors ahead. The best chance for ETSU came through Maegan Sours (Erie, Colo.) in the 28th minute. Sarah Connolly (Bollygowan, Northern Ireland) did well to get past her defender on the right side of the pitch, crossing into an incoming runner in Sours. Readjusting midair, the senior attempted the volley that flashed past the VMI shot stopper, but dribbled just wide of the post to keep the Bucs still searching for their goal.

Sours again had an opportunity on goal, being found with open space on her left-handed side as she cut onto her right foot and sent her shot into the strong hands of Swoope to send it over. The score would remain in favor of the Keydets entering the half.

Four shots were attempted in the opening eight minutes of the second half, the Bucs holding a 3-1 advantage while the Keydets forced Ashton Blair (Knoxville, Tenn.) into the only save of the four. The fifth shot proved key as a scramble inside the VMI box saw Merrin Gilmer (Johnson City, Tenn.) push a touch onto the foot of Nehls, who poked a quick reaction attempt past Swoope to give ETSU the equalizer in the 55th minute. The goal was the first of the career for the sophomore, who came off recording her third career assist in the 2-1 win over UNCG. Gilmer’s assist also was her first tally of her career after transferring to ETSU this season.

With the momentum shifted to the hosts, the Blue and Gold found it difficult to find the winner despite holding a majority of possession and outshooting the Keydets 7-4 in the second half. Sours again had an opportunity for a second winner in as many games in the 89th, her shot being blocked by an onrushing VMI defender to keep the score level heading into the end of regulation.

With fatigue setting in, both sides were end-to-end in search of the winning goal, a total of 10 shots being seen in the 20 minutes of extra time. Mostly being half chances, Swoope collected three of her saves in the overtime period with relative comfort as the Keydets held onto the result, forcing the Bucs to settle for a 1-1 tie.

The Bucs take on their first road trip of the season, facing Chattanooga on Friday before returning to Yelton’s former stomping grounds in Birmingham with a Samford battle to take place on Sunday.