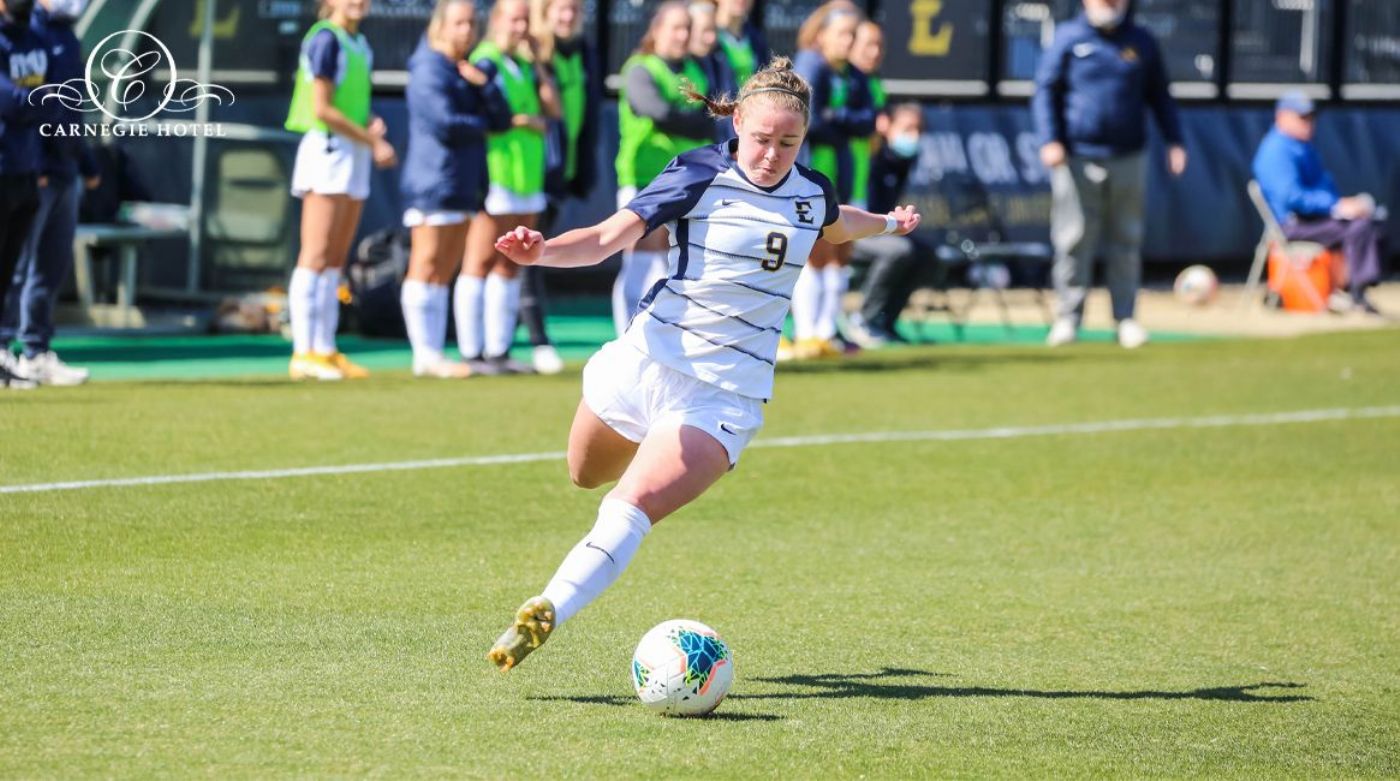 JOHNSON CITY, Tenn. (March 11, 2021) – After being able to train and play inside Summers-Taylor for nearly the opening month of the season, the ETSU women’s soccer team finally begin their road campaign this weekend, facing Chattanooga and Samford in SoCon action.

The Bucs had the luxury of never leaving Johnson City for the first month of their season, facing three-straight opponents in Summers-Taylor Stadium after hosting Marshall in the season-opener at Kermit Tipton Stadium on campus of Science Hill HS. In their home ground, the Bucs are 1-1-1 while dropping the lone contest away from Summers.

The Bucs enter the match undefeated in SoCon play after recording a win over UNCG last Friday and rescuing a Sunday draw to VMI, providing some momentum heading into the battle with the Mocs.

Tipped as surely one of the games to keep an eye on heading into the season, the Bucs then travel to Birmingham, Alabama as Jay Yelton makes his return to where he spent the previous 17 seasons on the sideline. The Yelton brothers reunite in a family battle as he and the Blue and Gold take on Todd Yelton and the Bulldogs.

The Bucs are set for action on ESPN+ for the Sunday matchup against the Bisons. Buccaneer Sports Network’s very own Mike Gallagher is on play-by-play for the call.

The attacking display was at its season-best this past week, outshooting both opponents for the first time this season. After a 16-10 advantage over the Spartans, the Bucs attempted 20 targets to VMI’s 12. ETSU continues to look for a stronger start, however, entering a trailing position in each of their first four games of the year.

Two members of the Blue and Gold scored their first career goal for the Bucs over the weekend, highlighted by some spectacular strikes from distance. Kendall King (Charlotte, N.C.) scored the equalizer on Friday from a 35 yard free kick, the shot to the top right corner being the first of two special goals on the day. Maegan Sours (Erie, Colo.) grabbed her first of the season, seventh of her career for the eventual game-winner after cutting back to her right foot and again finding the top right corner with just over 60 minutes on the clock. Jocelyn Nehls (New Richmond, Ohio) began her collegiate account against VMI, her quick reaction effort off a corner kick being tucked away to get an important leveler against the Keydets. With four saves in both games, Ashton Blair (Knoxville, Tenn.) looks to continue her strong start as the Buccaneer shot stopper. The freshman enters the match first in the conference in saves per game (5.25), holding a .778 save percentage. ETSU has five different goal scorers for their five goals on the season.

The Mocs and Bulldogs entered last weekend with just the one game against each other, set up for double-header weekends the rest of the conference season. After holding the Bulldogs to a 0-0 draw in double-overtime, UTC enters 1-0-1 into the matchup with the Bucs. Entering the season, the Mocs were picked for a fifth place finish in the SoCon.

Trying to find their footing on the attacking side of the field, the Mocs have only registered eight shots in their two games. The Chattanooga defense has held true, however, allowing just 10 opportunities from opponents. Reigning SoCon Defensive Player of the Week Ashton Shields enters with a 1.000 save percentage and 1.5 shutouts on the year, UTC yet to allow a goal on the season.

A matchup of sisters, Emma Arnold (Bristol, Tenn.) meets her older sister Chloe on Friday, who has registered one of the two goals on the season for the Mocs. Samantha Shaw scored the only other goal, while Mackenzie Smith brings the only assist on the year entering the game. The lone SoCon Preseason All-Conference Team selection Maggie Shaw looks to continue the dominant start for the Chattanooga defense, starting in both matches this season on the backline.

The reigning regular-season champions and preseason favorites Samford await a Buccaneer test on Sunday, playing host to a Yelton reunion when the two sides meet. After being on the Samford touchline for 17 years, Jay Yelton returns to his stomping grounds as ETSU Head Coach, taking Buccaneer Assistant Coach Matt Yelton along to face Todd, coach of the Bulldogs.

Leading the league in Preseason All-SoCon Team selections, the Bulldog line is led by forward Taylor Yount. With the only goal for Samford in the campaign, Yount has registered 11 goals entering her early sophomore campaign. Alyssa Frazier connects the midfield for the Bulldogs, a key component in the transition from defense to offense.

Lexi Orman returns as a First Team All-SoCon nomination from last year to help lead the Bulldog defense. The seniors has scored three goals from her spot on the backline. Morgan McAslan sits in goal for Samford, joining Orman on last year’s First Team All-SoCon squad, also earning the 2019 SoCon Tournament Most Outstanding Player accolade for her performance in the tournament, posting shutouts in both the semifinals and finals.

ETSU enters their 16th meeting with the Mocs, holding a 5-7-3 record against their in-state rivals. Both teams have had strong records as the home team, the Bucs only recording a 1-4-2 tally on the road. The two played to a 0-0 double-overtime draw last season at Summers-Taylor.

A side who have been a dominant force in the conference over the last decade, Samford has matched that tally within the series with the Blue and Gold. The Bulldogs have won eight of their nine matches against the Bucs. The only slipup came when ETSU knocked off Samford on the road in a 2014 3-1 win in Birmingham.