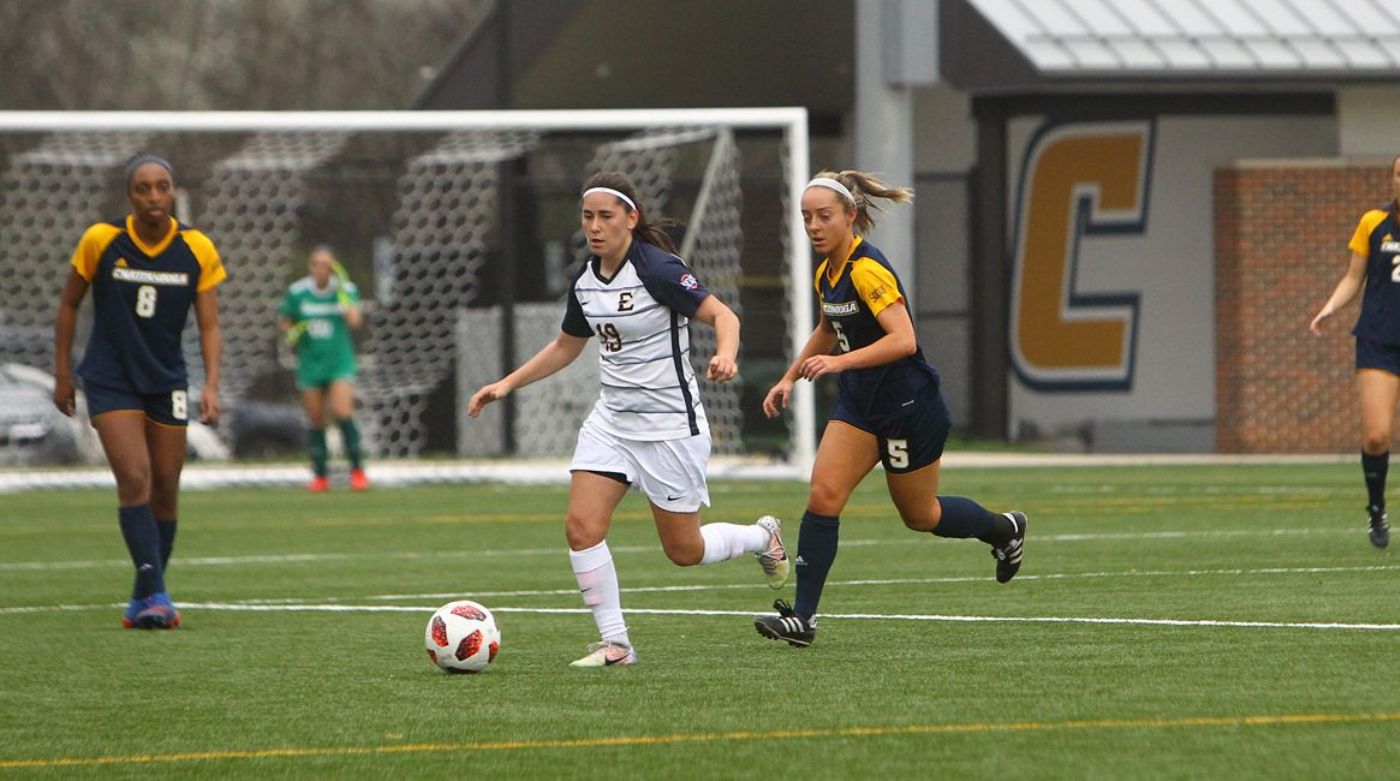 Chattanooga uses a 103rd minute goal to edge past the Bucs

CHATTANOOGA, Tenn. (March 12, 2021) – The ETSU women’s soccer team fell on the losing side of a 2-1 double-overtime defeat to Chattanooga on Friday afternoon inside the UTC Sports Complex, dropping their two-game unbeaten start in the league.

After opening the scoring in the second half, the Bucs looked to secure their second win in league play. The hosts had other ideas, finally breaking down the Buccaneer defense to equalize with just over 10 minutes to play in the contests. The Mocs used the home field advantage to grab their second of the evening, tallying the game-winning goal just three minutes into the second overtime to take all three points.

The Bucs were outshot for the first time in conference play, Chattanooga taking 14 attempts compared to the eight for ETSU.

Jocelyn Nehls (New Richmond, Ohio) scored her second goal in as many games. The opening goal was the second of her career after opening her account in the draw against VMI.

ETSU has now gone 12 games without a winning result when going into overtime. The Bucs are 0-8-4 in the last 12 attempts.

For the first time this season, the Bucs scored the opening goal of the contest. ETSU has also scored in each of their first five matches, the first time since the 2014 season the Blue and Gold accomplished the feat.

The opening minutes saw ETSU acclimating to a foreign turf surface at the UTC Sports Complex, something the Bucs have practiced on only a few times entering the match. With the hosts maintaining the majority of possession, the compact Buccaneer defense proved difficult for the hosts to break down. Both sides found difficulties creating any chances of substance, the Bucs needing the 36th minute to register their first shot on goal as Maegan Sours (Erie, Colo.) attempt fell into the hands of the Chattanooga keeper. Only one shot on target for each side was collected as the two teams went into the break with a 0-0 deadlock.

Only minutes into the second half, the Blue and Gold were the first to call the opposition into action. After a foul near midfield, Kendall King (Charlotte, N.C.) stepped up to take the kick. The captain launched a ball into an enticing position inside the 18-yard box where Nehls met it. Shielding off the defender, the sophomore turned her mark to her stronger left foot where she lashed the attempt across the goalkeeper and into the bottom right of the netting to open the scoring. Her 53rd minute effort almost duplicated her goal against VMI, where she scored her first collegiate goal in the 55th minute.

The next 15 minutes saw the Buccaneers drop a little deeper, making it hard for the Mocs to break down their defense. Ashton Blair (Knoxville, Tenn.) was called into action in the 59th minute, making a nice save to her right side to keep the Blue and Gold ahead. With nothing doing over the course of the next 20 minute, the hosts leveled the scoring after Chloe Arnold tucked a cross from Samantha Shaw into the bottom corner to equalize for the Mocs. The final 10 minutes saw neither team produce any chances for a winner, both teams entering their second-straight overtime game.

Both sides battled in the midfield for the entirety of the first overtime period, each team failing to register a shot in the 10 minutes. ETSU looked the side more likely for a winner with two corner kicks, but were unable to generate any substantial chance.

With the first shot of the game, the Mocs would take the spoils as Arnold slipped Kendra Mueller through as the forward’s effort squeezed by Blair, slowly crawling over the line before the closest Buccaneer could clear. The goal ended the game, giving Chattanooga the 2-1 win just three minutes into the second period.

The Bucs head to Birmingham, Ala. for a faceoff with ETSU Head Coach Jay Yelton’s former team. The Blue and Gold meet Samford in a battle of brothers in a 2 p.m. ET kick on Sunday afternoon.