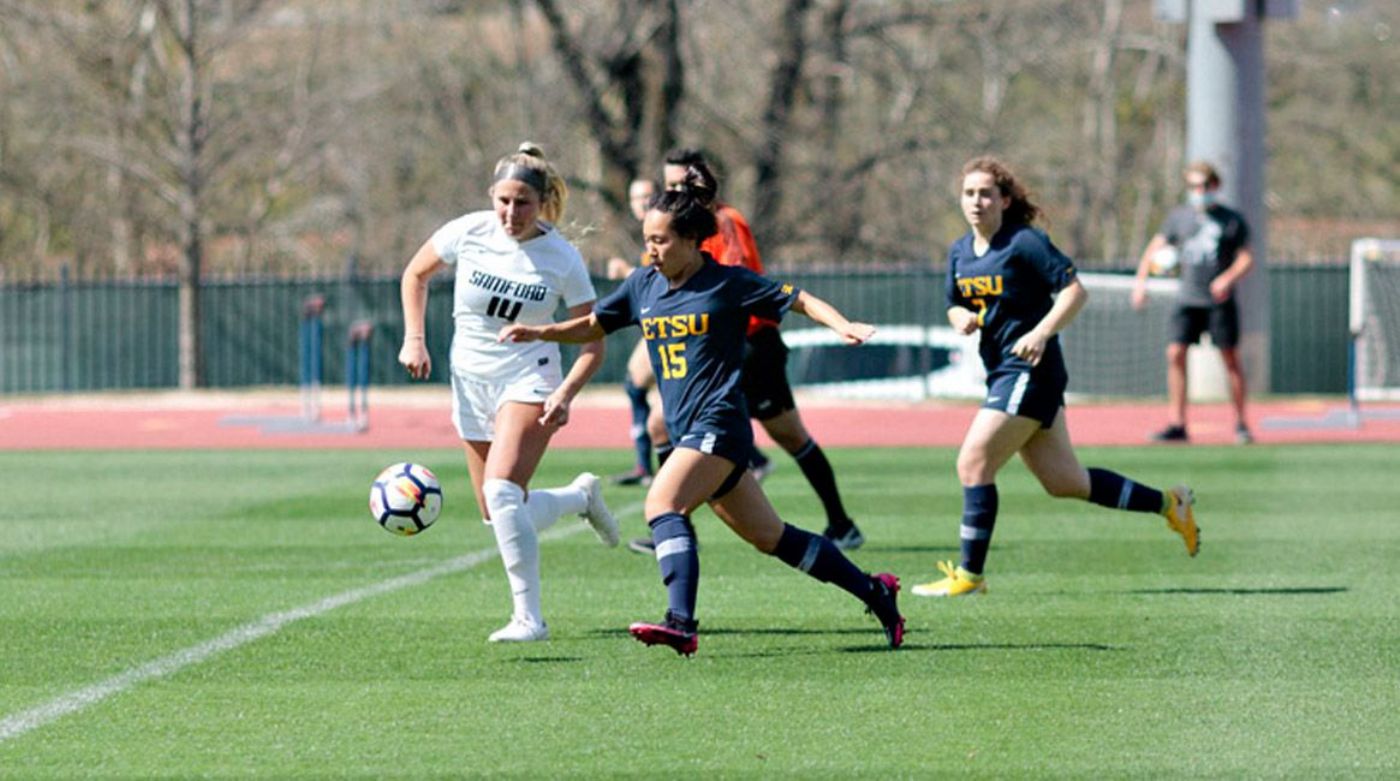 The Buccaneer defense held strong in the opening 20 minutes, keeping the Samford attack at bay. A long range effort would undo the strong start at the back before a late first half strike gave the Bulldogs a 2-0 lead into the break.

A 61st minute corner kick tucked away for the Bulldogs broke the levies, one of three goals scored in the next five minutes to secure the result for Samford as they were able to coast to a 5-0 victory on their home turf.

Samford showed why once again they were picked to defend their SoCon crown, outshooting the Bucs 19-1 on the afternoon, forcing ETSU into seven saves.

In the first meeting between the two brothers, ETSU head coach Jay Yelton took the loss against his brother on the sidelines he spent 17 years as an assistant.

The five goals conceded is the first time since 2018 the Bucs gave up that mark, dropping a 5-1 contest to UNCG in the conference semifinals. It also marks the first time ETSU lost by a five goal margin since Oct. 15, 2017, losing 5-0 at Furman.

ETSU’s run of five-straight games with a goal scored comes to a close, suffering their first shutout of the season.

The hosts spent the first 10 minutes applying the pressure on the defense of ETSU, forcing goalkeeper Ashton Blair (Knoxville, Tenn.) into four comfortable saves. Countering on the break, the Bucs grabbed their best chance early on in the 8th minute. A beautiful pass from midfield sent Jocelyn Nehls (New Richmond, Ohio) on a darting run past the backline. With a Bulldog closing in on the forward, Nehls let rip from just outside of the box as Samford goalkeeper Morgan McAslan barely got her fingertips to it, allowing herself to collect it on the second opportunity.

With pressure mounting from the hosts, the Buccaneer defense was nabbed from an effort from range. Lexi Orman picked the ball up on her left hand side of the pitch, curling an effort that sailed past her attackers but made its way towards the net. Blair was unable to retreat to her goal as the attempt curled into the top right corner to give the Bulldogs a lead in the 22nd minute.

Almost four minutes later, the Bucs nearly found themselves trailing by two as Alex Bice was able to get through on goal. This time, the freshman keeper came rushing out, forcing the Bulldog attacker to try and go over the top of Blair. The shot kept rising, landing on the top netting to retain a one goal deficit. With just seven minutes remaining in the half, the Bulldogs found their second goal as Audrey Kleiman played Bice through on goal, making no mistake on her second attempt. The score line remained 2-0 heading into the break.

Neither side launched a shot on goal in the opening 15 minutes of the second half. The Bulldogs continued their pressure, however, as ETSU rarely enjoyed a spell of possession on the Bulldog half. Samford grabbed the first quality chance, Taylor Yount forcing Blair into a save to her right. A minute later, the early pressure paid off as a Samford corner kick was tucked away by Ella Simpson to give the Bulldogs their third of the afternoon.

Samford added their fourth just minutes later, a loose ball in the defense being picked up by Yount who slot it comfortably home. The Bulldogs netted their fifth after a handball in the box was converted from the penalty spot by Caroline Orman.

The Bucs look to bounce back next week, facing Western Carolina in their only match of the week. ETSU faces the Catamounts on March 19 in a 3 p.m. kick.