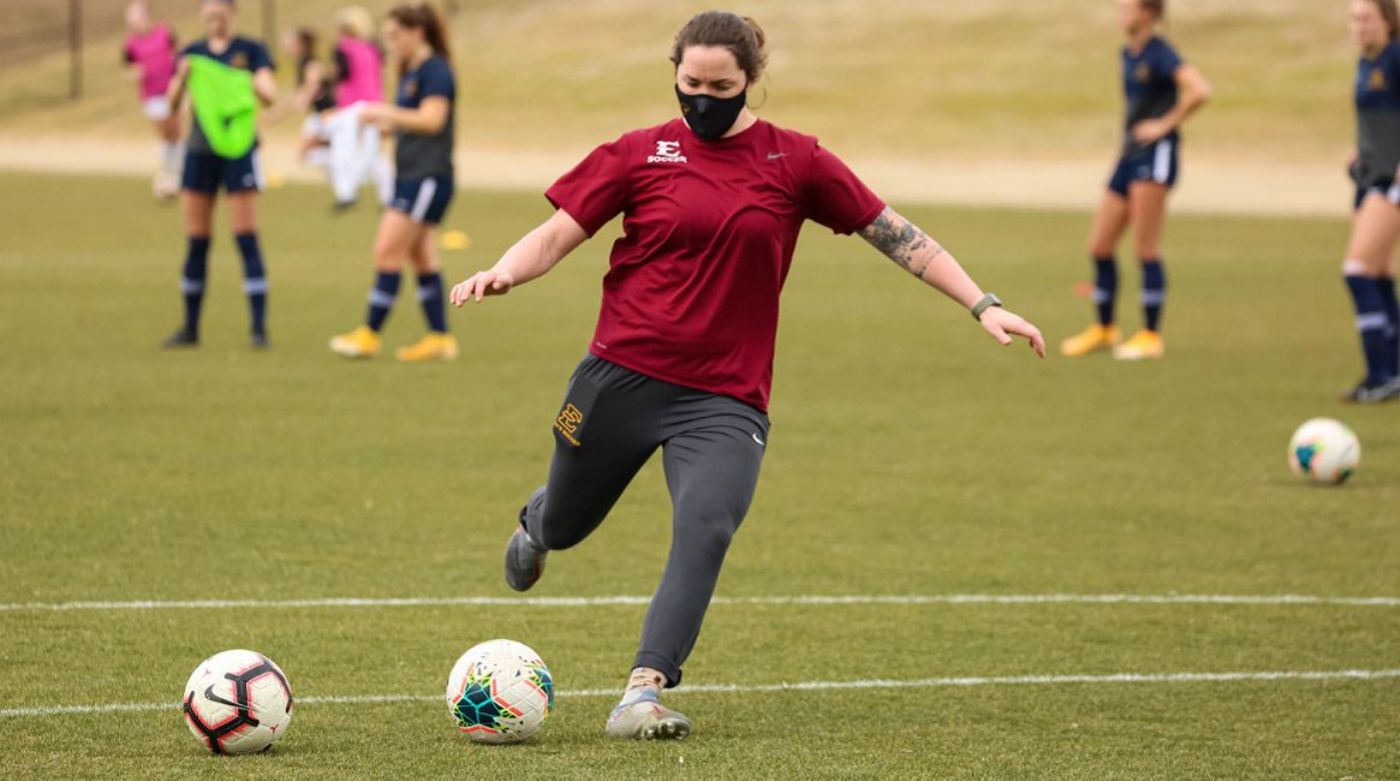 After a longstanding and successful career donning the Blue and Gold, Lea Ann Cutshall joined the Buccaneer coaching staff earlier this year in her return to the ETSU touchline.

The former Buccaneer shot stopper spent the last two years in Australia, featuring in the South Australia region of the Women’s National Premier League. Cutshall spent a year at both the Adelaide Comets and Adelaide City, both operating in the second-highest league of women’s soccer in the country. In her time across the world, the contrasting style of play brought a new element to her mindset.

“It was a lot less physical. The game was a little slower but a lot more technical,” stated Cutshall. “I think that it helped me see a different side of soccer and how to approach coaching, especially from a goalkeeper aspect. The set positions that I always learned was slightly different (in Australia), it was a big difference for me, and from a coaching standpoint, something I can bring back and help incorporate to the goalkeepers here.”

After her chapter as a professional player comes to a close, Cutshall returns home after being accepted into Lincoln Memorial’s osteopathic program. Before joining in the fall, Cutshall found the opportunity to continue doing what she loves: soccer and coaching.

“Funnily enough, I coached rugby when I was over in Australia and loved it,” said Cutshall.

With connections in the coaching staff at ETSU, and also with former teammates still applying their trade for the Buccaneers, Cutshall brought up the idea and watched it unfold.

“I fell in love with coaching, and between being back in Johnson City and remaining close with Fiona (Dodge) and some of the girls, I mentioned that if they needed an extra set of hands with the goalkeepers that I’d be happy to help.”

With the gears turning, Cutshall soon traded her keeper gloves for coaching ones as she began helping at practice in the same fields her legacy remains to this day.

“Out of nowhere, the talks turned into me coming to most training sessions and then to games. It has been fun to see them develop and I’ve become emotionally invested all over again.”

Perhaps no better person could join the staff that is being built at ETSU.

Fiona Dodge is in her second year on staff after a four-year career in the Blue and Gold where she played an integral role in the squad throughout her time as a Buccaneer. Entering their first season in charge of the program, both head coach Jay Yelton and his assistant, and brother, Matt both hail locally with the campus of ETSU right in their “backyard” growing up.

Now, with Cutshall added to the staff, the Buccaneers have roots entwined with the community that are as strong as ever.

“I just try and help wherever I can,” commented Cutshall. “Some days I am not needed as much, and some days I am extremely involved. For goalkeepers, it is important to have consistency in training, you lose the technical side if you don’t train it every day. It’s little stuff like that they (Jay and Matt) see when looking at the big picture. I just try and afford them the ability to have that consistency.”

To think, there was a time that Cutshall didn’t even imagine continuing her path in the sport.

“I actually had quit playing soccer. I played club until my 8th grade year, but quit before coming to Science Hill. I decided to start playing again and my goalkeeper coach was connected to ETSU. He said we were going to have a look at ETSU and thankfully, it just worked out.”

The Johnson City native not only returns to her hometown team and alma mater, but does so with her name populating throughout the record book.

In her two full seasons as the number one in the net, Cutshall recorded two campaigns that rank in the top 10 for saves, has a tie for most shutouts in a season and holds the eighth-best goals allowed average at 1.08. Despite the records and accolades earned in her career, the thing that stuck out to her most was the relationships she made.

“The relationships and friendships with the staff and team is what I hold on to the most,” said Cutshall. “I have friends across the world that I still talk to. That’s the hugest thing to me, the connections I have made along the way.”

With the connections made, Cutshall is excited to see the next wave of Buccaneers follow that same journey she made.

“It’s a little more special to be able to come back and do this for the school I went to,” Cutshall said. “It’s good to come out to training and feel the memories I made there, but also see the girls make the same ones that I made my four years there.”

Needless to say, with Cutshall around, the program is in good hands.