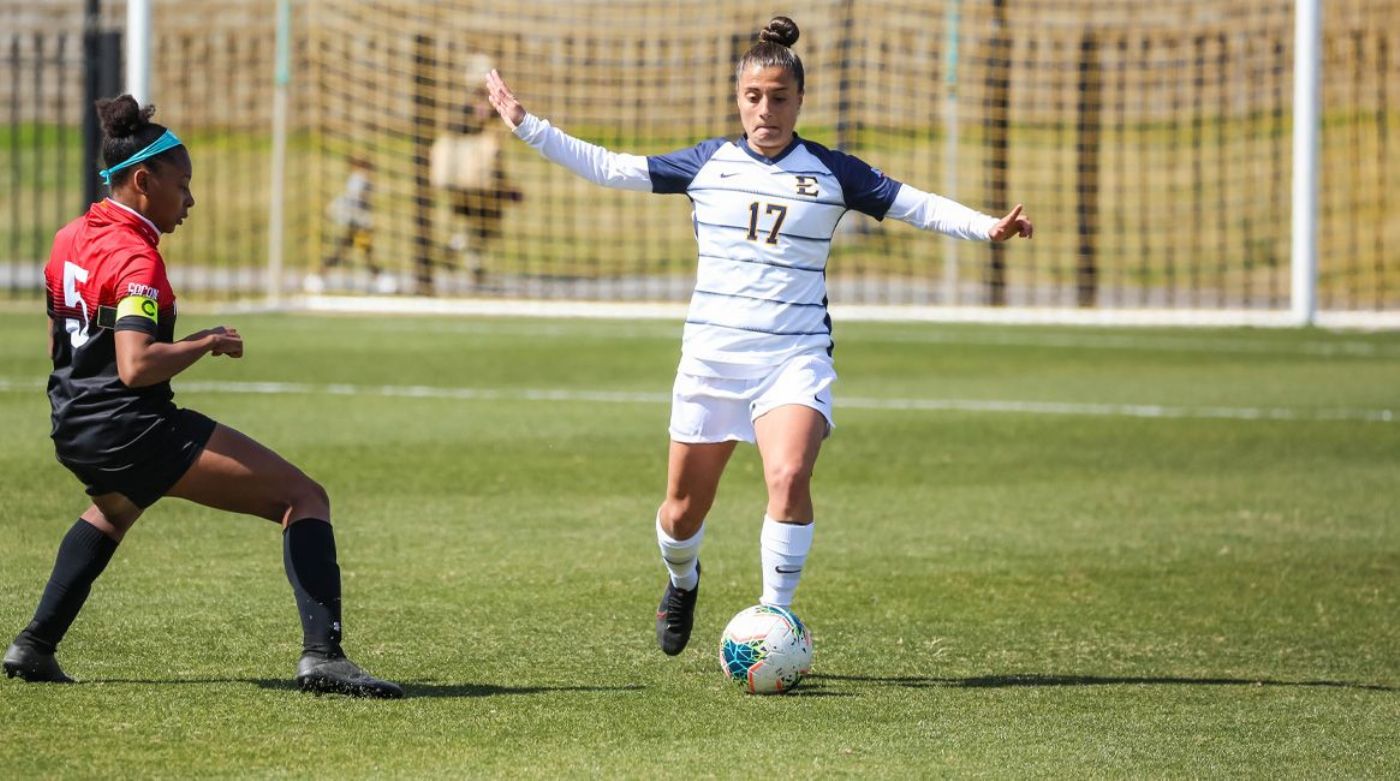 JOHNSON CITY, Tenn. (March 25, 2021) – The ETSU women’s soccer team is set for their final action of the season inside Summers-Taylor Stadium, welcoming the Wofford Terriers and Furman Paladins to Johnson City on Friday and Sunday afternoon.

The Bucs are set for action on ESPN+ for the Friday/Sunday matchups. Buccaneer Sports Network’s very own Mike Gallagher is on play-by-play for the call in both.

With only one game the past weekend, the Bucs met their travel partner Western Carolina in Cullowhee for a Friday afternoon matchup. In a series history where the last five games were decided by a goal and each side took turns grabbing a win, the Catamounts broke the trend with a 3-0 win over the Bucs to protect their home turf.

Entering the weekend with a 1-3-1 record in the Southern Conference, the Bucs look to make up some ground when hosting a pair of matches against the Terriers and Paladins. With a stagnated offense in the last few matches, the Bucs look to increase their 9.0 shots per game (8th in SoCon) after being unable to find the score sheet the previous two matches. ETSU enters with 16 goals allowed on the season, half of them coming in the previous two games after holding one of the stouter defenses in the conference midway through the season.

The depth has been tested over the course of the season, injuries and a small roster taking a toll on the Buccaneer bench. In the seven matches so far this season, Head Coach Jay Yelton has been forced into seven different starting lineups, unable to create consistency and familiarity among the squad in his first season at the helm of the Bucs.

Bright moments have been found within the unfolding season. Jocelyn Nehls (New Richmond, Ohio) has found the back of the net twice in conference play, scoring her first goals of her career on the way to lead the team in scoring. Sinoxolo Cesane (Cape Town, South Africa) and Merrin Gilmer (Johnson City, Tenn.) have both proved to be great additions into the Buccaneer midfield, combining for 12 starts between the two. In defense, Kendall King (Charlotte, N.C.) and Taylor Limprevil (Spring Hill, Tenn.) have both added their first collegiate goals this season, King leading all outfield players with 658 minutes notched under her belt on the year.

Before meeting an in form Samford and Western Carolina side, Ashton Blair (Knoxville, Tenn.) was off to a spectacular start in between the posts for the Bucs. Fighting off injuries as the only rostered goalkeeper, Blair still owns a solid rookie campaign, registering the third most saves in the league (37) while holding a .698 save percentage.

The Terriers enter with equal footing in both the offense and defense, scoring and conceding seven goals in their six matches. Wofford enters the weekend 2-3-1, coming off of similar defeats to UTC and Samford as the Bucs had.

Averaging 1.17 goals per game, the Terriers sit in the middle of the pack of the SoCon in a number of offensive and defensive categories, playing joint-fewest matches on the year. Wofford enters as one of the cleanest squads in the SoCon, whistled for the least number of fouls per game (8.7 per game) and only being admonished one yellow card on the year. Wofford has also seen early struggles to create set pieces, averaging just over three corner kicks per contest.

Mia Bookhard paces the Terrier attack, leading the team with three goals and a team-high six points. Four other Terriers have registered one goal, while Katie Gilligan is the only Wofford player with multiple assists, leading with two. Olivia Hughes leads the outfield with all but five minutes played on the season, adding a goal from her spot in the defense. Maria Mon has been the featured goalkeeper of the three receiving action on the year, making five starts. The junior has tallied 21 saves, a 1.22 GAA and a .750 save percentage.

Furman suffered their first blemish this past weekend, drawing with league-favorites Samford in a 1-1 display in Greenville. The Paladins knocked off their first five opponents, standing alone at the top of the SoCon table entering the weekend.

The Paladins have registered over 100 shots in their six matches, a 17.0 shot tally per contest. Furman ranks second in assists per game and third in goals per game (1.50), entering the weekend as the stoutest defense in the conference. The Paladin backline has conceded just twice in six games, good for a league-leading .31 GAA.

Nieva Gaither and Isabella Gutierrez enter the weekend series leading the SoCon in shots per game at 4.0 and 3.3 apiece. The two have combined for five goals and five assists, Gutierrez leading the team with three goals while Gaither tallied a team-best three assists. Addison Corn I set for action in the net, holding a 2-0-1 record this year. The freshman holds a 0.23 GAA, tallying 16 saves and a remarkable .941 save percentage. Her and Nora Sampson have combined for four shutouts on the season.

The Bucs and Terriers meet for the 17th time on Friday, Wofford leading the series 8-7-1 overall. The Blue and Gold own a strong record inside Summers-Taylor, going 6-1 when playing in Johnson City. Last time these two teams clashed, the Terriers squeaked by with a 1-0 home win in Spartanburg in 2019.

Furman has had the upper hand in the series with ETSU, holding a 14-2 record over the Bucs. Despite the lopsided margin, the two teams have only played in six previous matches at Summers-Taylor, ETSU grabbing its only two wins in the series in front of the Buccaneer faithful.