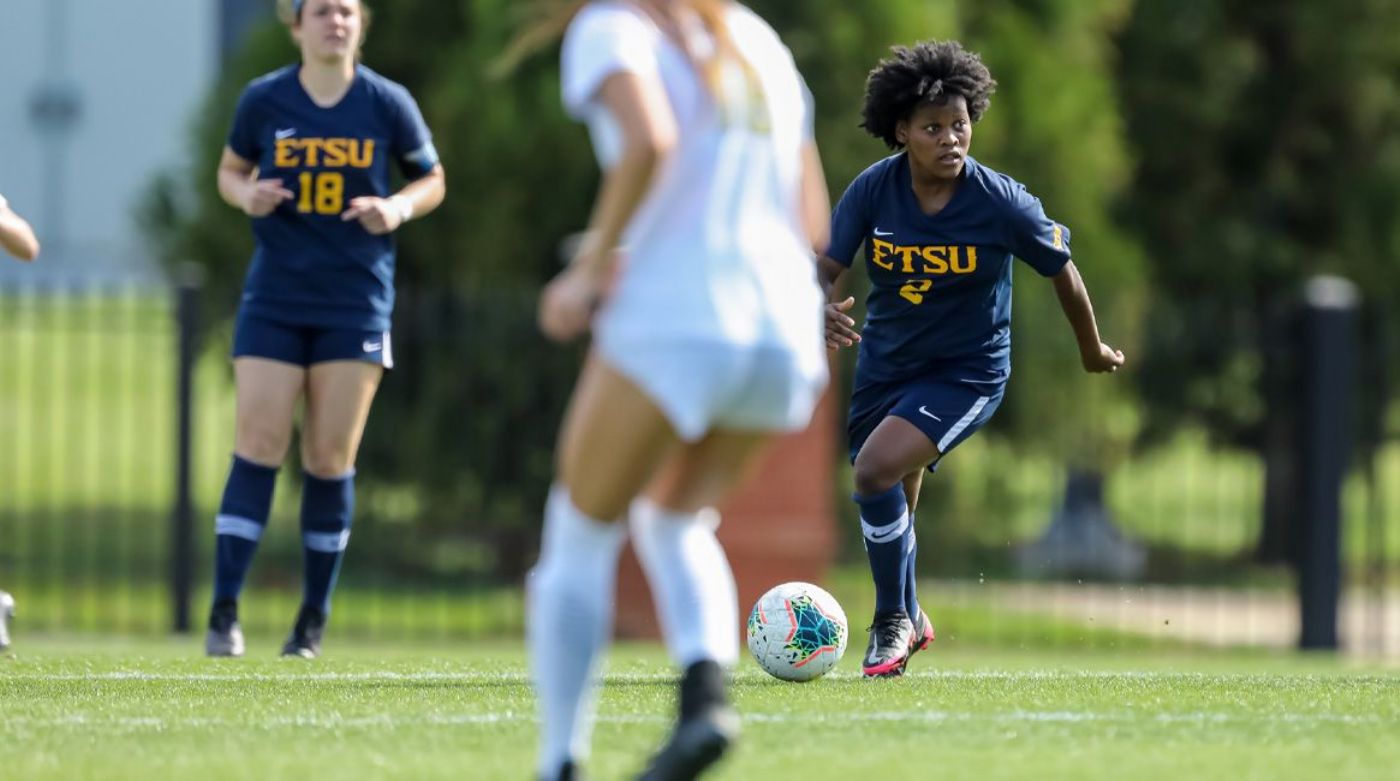 JOHNSON CITY, Tenn. (March 26, 2021) –  An early goal for Wofford proved vital as the ETSU women’s soccer team dropped its penultimate match of its home season inside Summers-Taylor Stadium, falling to the Terriers 1-0 in SoCon action.

With each side grabbing a chance in the early stages of the game, the visitors proved more clinical in the opening 10 minutes as the Terriers grabbed a lead early in the contest.

A grueling battle in the midfield on a hot spring day in Tennessee saw both teams use a heavy rotation, but in the end the Bucs couldn’t muster the final product as Wofford walked off in regulation with a narrow 1-0 win over the hosts.

The Bucs finished with more shots in the first half than in their previous two matches, the 7-6 shooting advantage being held by the Terriers. Wofford finished with a 11-8 advantage, outshooting ETSU 4-2 in the second half.

ETSU answered the call to six Wofford corner kicks, the defense handling the set pieces with ease on the afternoon. Despite a healthy attack on the other end, the Bucs were unable to generate any set pieces off corner kicks.

The battle of the midfield proved physical throughout the contest, 20 fouls being called on the afternoon. The Bucs were recorded for 11, while the Terriers were whistled just nine times.

The Bucs grabbed the opening chance of the contest just three minutes into the contest. A good interchange of play set up Merrin Gilmer (Johnson City, Tenn.) at the top of the box, the junior firing her shot high and wide of the Terrier goal. Moments later, the Terriers capitalized on their first attack of the half. After a wonderful save from Ashton Blair (Knoxville, Tenn.) denied a goal from Wofford’s Katie Gilligan, the Terriers were first to the rebound as Dani Segovia secured the rebound and tucked it into the Buccaneer net.

Despite the early goal, ETSU looked just as capable for a response, almost finding the back of the net just shortly after. Katie Philips (Tega Cay, S.C.) found herself in a good position on the left side, driving past her mark and firing low across goal, forcing Wofford goalkeeper Maria Mon to make her first stop of the day. Sinoxolo Cesane (Cape Town, South Africa) drove a shot near post just two minutes later, the effort flashing just wide of the post. Two tame efforts from both sides saw the keepers face minimal action the rest of the way, the visitors entering the halftime break with a 7-6 advantage in shooting and a one goal lead.

An easy collection from Blair in the opening stages of the second half turned into the only piece of action in the final third for either side, the next attempt not coming until the 78th minute through a harmless Terrier header. Despite hosting a lot of possession in the attacking third in the final 10 minutes, the Bucs were unable to break the Terrier backline outside of a long-distance effort from Raffa Giuliano (Caserta, Italy). With one last gasp for an attack, Philips picked up the ball 40 yards out and rounded her man, entering the box before being clattered into from behind from the recovering defender. The ref deemed the challenge legal, sending the Buccaneer sideline and stands into a frenzy as Wofford cleared their lines with just over a minute remaining. A lashing shot with minimal time on the clock was all the Bucs could muster after the momentum-shifting call was made, sailing past the Wofford net as the end of regulation neared. The Terriers were able to let enough time past on the ensuing goal kick to settle the result, escaping Johnson City with all three points.

The Bucs finalize their home schedule on Sunday afternoon, facing Furman at 1 p.m. inside Summers-Taylor.