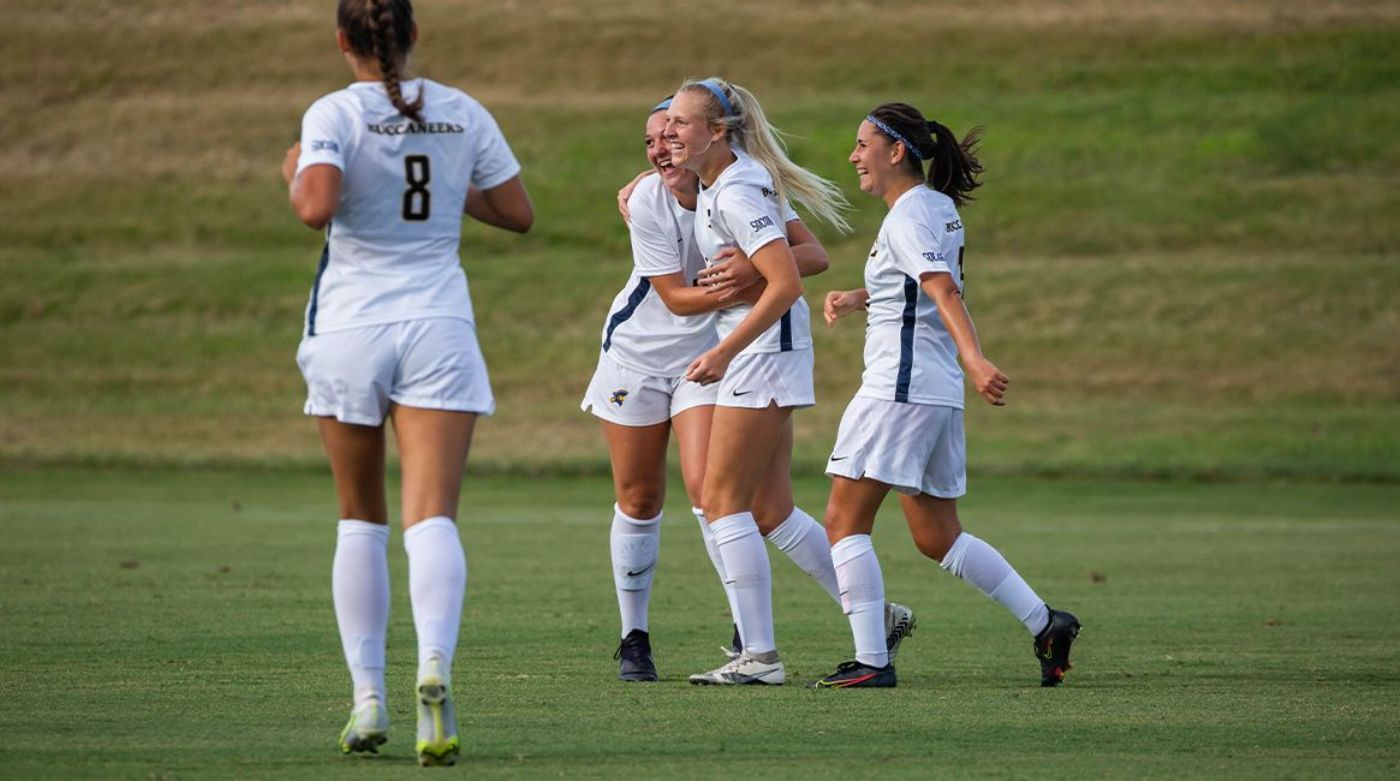 The match between the Bucs and Blue Hose comes after a road trip all the way to Oxford, Miss. to take on #23 Ole Miss was called minutes before kickoff, adverse weather conditions forcing ETSU to make the trip back to Tennessee without a result to show for their long travel.

ABOUT ETSU
Plenty of addition and hardly any subtraction defines the squad entering the 2021 campaign, looking to build off Yelton’s first year in charge of the Bucs earlier in the spring. All 20 players who played in the spring season return to the field, with an additional eight players joining the roster.

With six goals in eight games, the Bucs look to identify their next threat on goal after Sarah Connolly (Bollygowan, Northern Ireland) remains sidelined with an injury suffered in the spring. The senior entered the season with 16 career goals, placing her 10th on the program leaderboard. After a quiet sophomore campaign, Andjela Kricak (Krusevac, Serbia) will look to get back in her freshman form that saw her register two goals and six assists.

Seventh-year Pamela Penaloza (Bogota, Colombia) looks to solidify the ETSU defense, joined by a Buccaneer veteran Raffaella Giuliano (Caserta, Italy) as the two will help lead a host of incoming youth in the position.

With only one goalkeeper on the roster last season, the position has quickly become one of the most interesting battles in the preseason as two freshman shot stoppers join the depth chart this season.

ABOUT PRESBYTERIAN
One of the longest tenured coaches in the country, Brian Purcell entered his 33rd season in charge of the Blue Hose program, leading them to one of their best seasons in recent history the year prior with a 5-4 record in an altered spring season. With Clinton, S.C. proving to be a fortress for the visiting side, Presbyterian holds a 5-1 record at home. More susceptible on the road, the Blue Hose are 1-4 in the last two seasons when away from Martin Stadium. In an incredible feat, the last time Presbyterian drew in a match was back in October 21, 2015 in a 1-1 tie against Big South foe Gardner-Webb.

One of the two goal scorers with three goals scored last season returns to the Blue Hose roster as Kori Lawrence has already gotten off the mark in the season, grabbing the winner against Alabama State their last time out. SoCon member Furman traveled to Presbyterian for each’s opening match of the season, the Paladins walking away with a 3-0 win against Thursday’s visitors.

SERIES HISTORY
Having only met one previous time in program history, the Bucs hosted Presbyterian in the 2012 season. A victorious one for the Blue and Gold, ETSU used a goal in the first overtime to edge out a 3-2 win in Summers-Taylor.

SEASON OPENERS
Heading into the 25th season of the program, the Bucs hold near a .500 record in their first games of the season. Entering the matchup with the Blue Hose at 11-12-1, the Bucs hold a better record when welcoming opponents to Johnson City on the season opener, going 7-4-1. The Bucs biggest season opening win came in 2017, blowing by South Carolina State in an 8-0 fashion. The last five seasons have opened with a home contest, ETSU 3-2 in that period. In head coach Jay Yelton’s first season at the helm, the Bucs fell to Marshall in a 2-1 overtime defeat, the match being played at Kermit Tipton Stadium on the campus of Science Hill High School after a waterlogged Summers-Taylor was deemed unplayable.