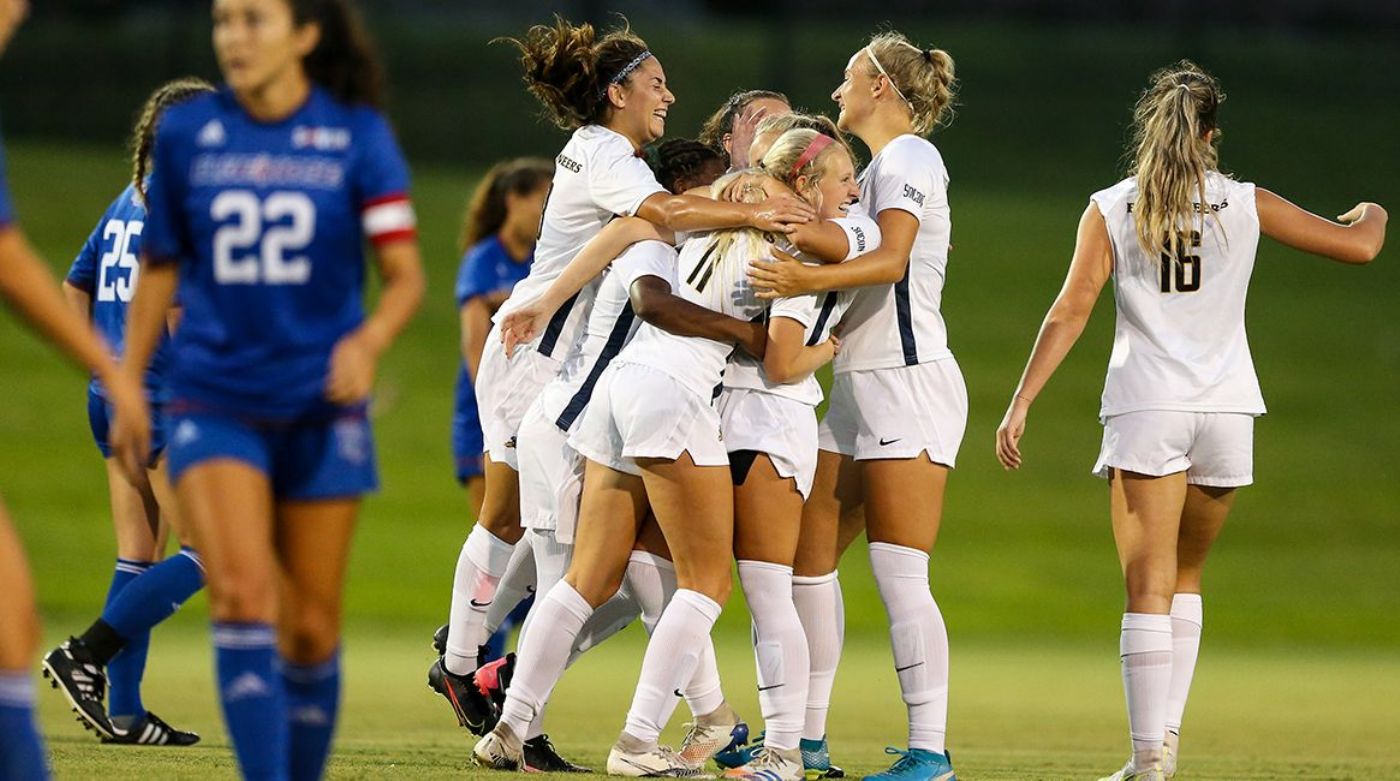 After weather delays caused a cancellation in the opening game of season on the road, weather once again played a factor on Thursday night inside Summers-Taylor Stadium. The ETSU women’s soccer team overcame two lightning delays on the evening, controlling the match in a 1-0 score line against the Blue Hose.

Katie Philips (Tega Cay, S.C.) opened her collegiate account after making the move to winger just five minutes in, executing a near perfect counter attack triggered from a threaded pass from Maegan Sours (Erie, Colo.). The junior nearly doubled her tally, only moments later having a penalty shout being waved away by the referee after being tripped up by the onrushing keeper.

Making her debut in goal, Shu Ohba (Fujisawa, Japan) was called into action only ONCE all game, standing tall to the challenge on the occasion. The freshman displayed a range of passing, proving to be a useful tool in distribution out of the back.

Megan Serrano claims the loss for the Blue Hose, allowing the first half goal while making five saves in the opening frame. Kelly Hall held split duties, coming out for the final 45 minutes while making seven saves.

After forcing the keeper into early action just two minutes in, the Bucs entered the hour delayed contest with an attacking mentality that paid off just five minutes into the match. Sours played a perfect ball over the top, Philips racing past her defender and taking her time to tuck it around the keeper.

The Bucs remained on the front foot, keeping the pressure on the Blue Hose defense. Nele Bauer (Bammental, Germany) and Sydney Somogyi (Germantown, Tenn.) both forced outstretched saves from Serrano before Jocelyn Nehls (New Richmond, Ohio) added a shot on target with just over 30 seconds remaining in the half.

The Blue Hose were first to register an attempt in the second half, a strike that was cleanly handled by Ohba. After Jenna Brown (Claremore, Okla.) fired just wide of the target, Presbyterian recorded their final attempt of the game that was seen wide by the freshman shot stopper.

In a span of three minutes before the 60th, the Bucs forced newly changed goalkeeper Hall into action, the Blue Hose shot stopper proving her own on all three attempts from Andjela Kricak (Krusevac, Serbia) and Philips. Just before the 80th, Hall once again made two stops in under 20 seconds to keep her side still in the match.

With over a minute remaining, Kyra Ranvek (Knoxville, Tenn.) had a chance to kill the game off, receiving a perfectly weighted ball six yards out of goal. The sophomore winger rifled it past the keeper, but it narrowly missed the left post and went out harmlessly for a goal kick. The Buccaneers were able to remain solid, closing out the final minute comfortably to see out the win.

Outshooting Presbyterian 23-2 on the match, the Bucs forced 12 saves out of the Blue Hose keepers. The 23 shots were the most taken from a Buccaneer side since a 4-0 rout over King University on August 22, 2019.

ETSU’s 23 shots and 12 shots on target is the highest of the early stages of the Yelton era.

The Blue and Gold did not allow a single shot in the first half, while creating 13 shots of their own.

Philips’ goal (4:49) was the quickest on the board since the 2019 season, Sydney Cavendar getting the Bucs on the score sheet in 1:28 against The Citadel.

The season-opening win was the first one over a Division I program since August 18, 2017 when ETSU defeated South Carolina State 8-0 at Summers-Taylor. ETSU beat Division II side King in 2019 for their last season-opening victory.

The Bucs make the short trip to Asheville on Sunday afternoon to take on UNCA in a 2 p.m. kick, set to be broadcasted on ESPN+.