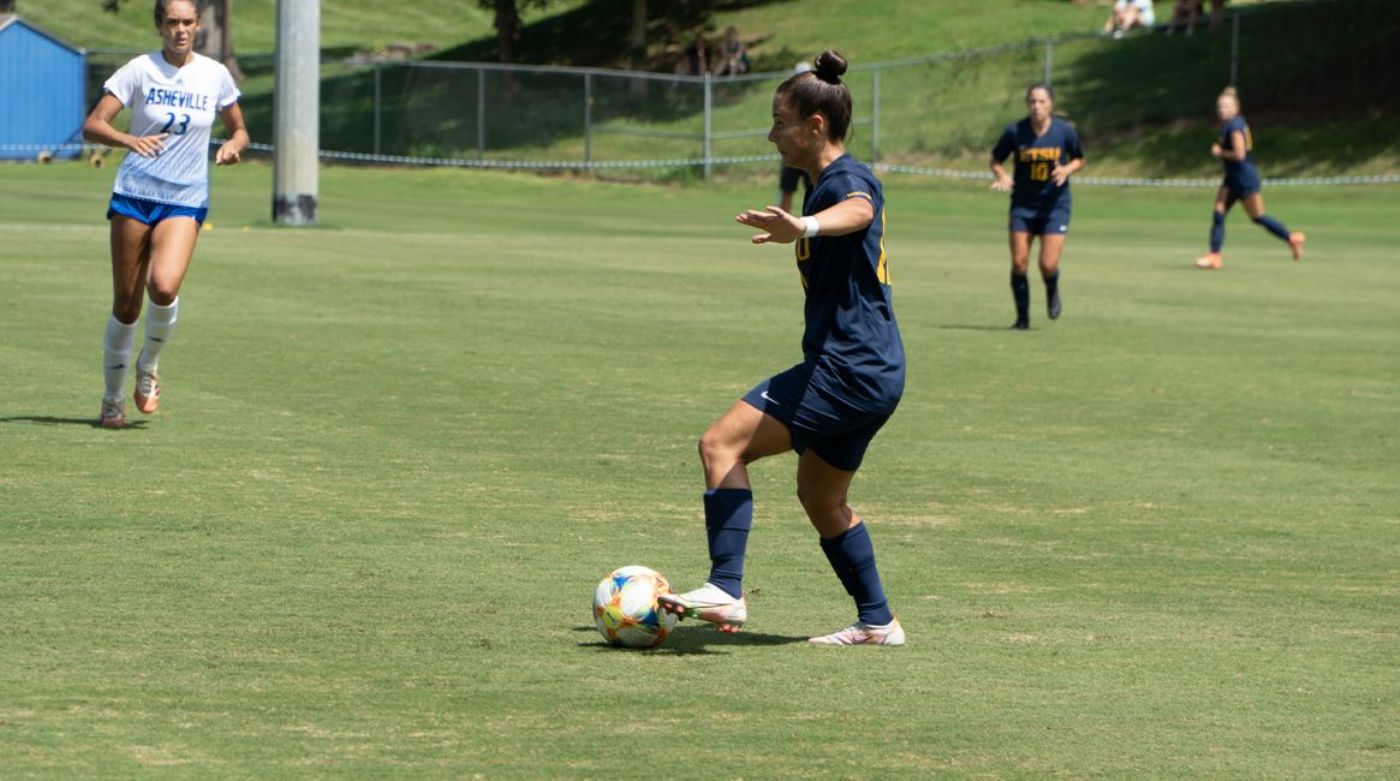 ASHEVILLE, N.C. (Aug. 29, 2021) – The strong start to the season continues for the ETSU women’s soccer team, who earned a dramatic 1-0 road win in double-overtime victory against UNC Asheville on Sunday afternoon.

After a dominant first half display that saw the Buccaneer defense hinder their opponents to zero shots for consecutive games, the hosts opened the game up more in the second half with multiple chances to strike first that rattled off the woodwork. ETSU retained their possession throughout the majority of the match and into the overtime period, where the Bucs struck 12 minutes into extra time to grab their first overtime win in the last 14 attempts.

With the first 16 shots unable to find their way past the Asheville goalkeeper, it was an unlikely hero that found the winner in the 102nd minute for ETSU. After a composed display in the defense, freshman Sydney Somogyi (Germantown, Tenn.) played above her experience to make an impact on both ends of the field. After a corner kick was punched into the air, Somogyi leaped to challenge the goalkeeper for the ball and was able to push it past the traffic in the 102nd minute to provide the Buccaneers with their second straight win to open the season.

Shu Ohba (Fujisawa, Japan) begins her career as a Buc with two wins in two starts, providing a clean sheet in both of her opening matches. The freshman was called on three times today, standing tall to the task.

Bronwyn Luitwieler provided heroics throughout the course of the 102 minutes of action, but the Bulldog keeper was beaten after making five saves on the afternoon.

With the visiting Blue and Gold enjoying large spells of possession, the Bucs still found it difficult to break the Bulldog defense down. Over the course of the opening half hour, Andjela Kricak’s (Krusevac, Serbia) tame effort on goal saw the only save in the early stages. The Bucs held a 3-0 advantage in shots after 30 minutes.

After the first half ended without threat from either side to break the deadlock, the hosts almost fired the first shot of the afternoon just opening minutes into the second half. After pinballing off a host of players outside of the Buccaneer penalty area, Madison Carter picked up the ball with her left foot and cannoned an effort off the crossbar to leave the Buccaneers scrambling to send the rebound out of harm’s way.

Settling down, the Bucs soon returned the pressure as Nele Bauer (Bammental, Germany) found herself on the end of a threaded pass, a Bulldog defender making a last ditch effort to deny the freshman. UNCA once again was let off the hook after Maegan Sours (Erie, Colo.) made a darting run down the right hand side, rifling an effort that narrowly missed the left post from 15 yards out just past the hour mark.

The Bucs almost found themselves undone on a counter attack from the Bulldogs after a misplayed ball found the foot of the UNCA attack. The play ended up finding Ava Nkadi on the right hand side of the field, the right post staying strong as the ball smashed off of it and back out wide.

Ohba was called into action for the first time with just over 10 minutes on the clock, diving to her right for a save that was cleared away by the Buccaneer defense. The Bulldogs found a decent spell of pressure, forcing the Japanese goalkeeper into another save just moments later. Once again, the hosts would clang the right post as ETSU’s defense held on to their clean sheet by the threads.

With ninety minutes played, neither team found the decider as overtime loomed around the corner. With ETSU holding the majority of possession, neither side created major chances in the first 10 minute period.

After ETSU earned a corner kick just about 30 seconds in to the second frame, the Bucs finally made the pressure pay off. Kendall King (Charlotte, N.C.) whipped in the corner, first finding an oncoming Luitwieler who punched the ball up. Somogyi was first to the rebound, heading home on the second opportunity past a group of defenders on the goal line as the freshman wheeled away to celebrate her first collegiate goal in dramatic fashion.

The Bucs held their opponent without a shot in the opening half for the second game in a row to start the season, holding a 5-0 advantage at the break. UNCA closed the gap, finishing with a 17-13 ETSU advantage. The Bucs now have outshot the opposition 40-15 this year.

The 102nd minute goal was the latest in program history since Sept. 14, 2014, a 109th minute goal by Summer Peterson grabbing the win for the Bucs over Howard.

ETSU breaks a streak of 13 consecutive overtime games without a win, previously 0-8-5. The last win in overtime came in a 1-0 match over Mercer on Oct. 8, 2017, Sarah Connolly (Bollygowan, Northern Ireland) grabbing the decider.

For just the third time in program history, the Bucs finish their first two games with a win and clean sheet in each of them, joining the 2003 and 2016 squad in the feat. ETSU’s 2003 team opened the season with four straight shutout wins.

Somogyi becomes the first freshman to score in a game since 2019, Momoko Horiuchi (Paris, Tenn.) the last to strike in her rookie season.

The women get a short rest before heading on the road again next week, taking on Radford in a 7 p.m. Thursday kick on Sept. 2nd.