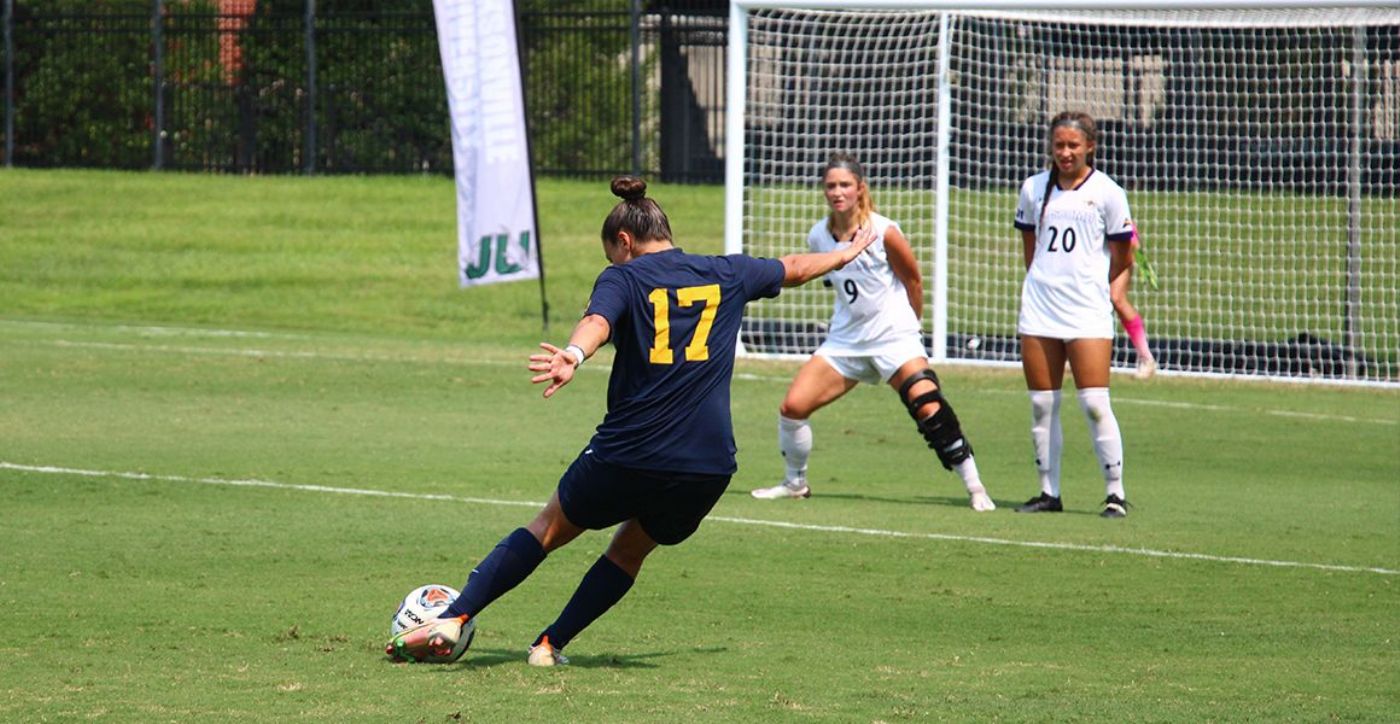 NASHVILLE, Tenn. (Sept. 12, 2021) – Facing the preseason ASUN favorite in its final game of a long road swing, the ETSU women’s soccer team battled Lipscomb to a 1-1 draw on Sunday afternoon from the Lipscomb Soccer Complex.

ETSU – who was playing its fourth and final game of the road trip – posted its first draw of the season en route to moving to 3-1-1, marking the Bucs’ best five-game start since opening 4-1 in 2015.

Lipscomb also took its first tie of the year to see its record move to 5-2-1. The Bisons were tied with UNF in the ASUN Preseason Coaches Poll, while Lipscomb has already defeated Mississippi State and Miami earlier this season in non-conference play.

The Bucs remained unbeaten in Nashville against Lipscomb as ETSU is now 5-0-1 against the Purple and Gold on their home turf.

For the fourth time this season, ETSU struck first when senior defender Raffaella Giuliano (Caserta, Italy) scored her first goal of the campaign in the 23rd minute. The goal was set up when Jenna Brown (Claremore, Okla.) was taken down by a Lipscomb defender, resulting in a free kick for the Blue and Gold. Giuliano stepped up on the right side of the turf and fired a perfect shot to the far post, giving the Blue and Gold the 1-0 lead.

Unfortunately, Lipscomb pulled even late in the half when the Bucs couldn’t clear the ball and Shadia Valenzuela – who came off the bench at the 23rd minute – snuck the equalizer past the diving Shu Ohba (Fujisawa, Japan) via the left side of the post in the 35th minute.

Lipscomb was plus-9 in shots (23-14), however, the Bucs held the edge in shots on goal, 8-5. After only taking three shots in the first half, ETSU registered 10 in the second, while only getting off one in overtime.

The Bisons out-shot ETSU 6-1 in overtime, while being plus-5 in first-half shots, 8-3. Lipscomb’s three shots in the first 10-minute overtime period came in a one-minute barrage, while  Momoko Horiuchi (Paris, Tenn.) accounted for the lone Buccaneer shot in overtime, coming in the final seconds of the contest.

Fouls were nearly identical with Lipscomb committing one more than ETSU, 14-13, while the Bisons were plus-4 in corner kicks, 10-6.

Ohba made four saves for the Bucs as she moved to 3-1-1 on the year, while Lipscomb’s CJ Graham stopped seven shots to see her record tick to 5-2-1. The Bucs tested Graham in the second half as six of their 10 shots were on goal, including a pair by Katie Philips (Tega Cay, S.C.) over a one-minute stretch in the 60th minute.

Giuliano’s goal was her first since Oct. 20, 2019 against The Citadel in Summers-Taylor Stadium. That goal also came on a free kick. Giuliano has now totaled four career goals in the Blue and Gold.