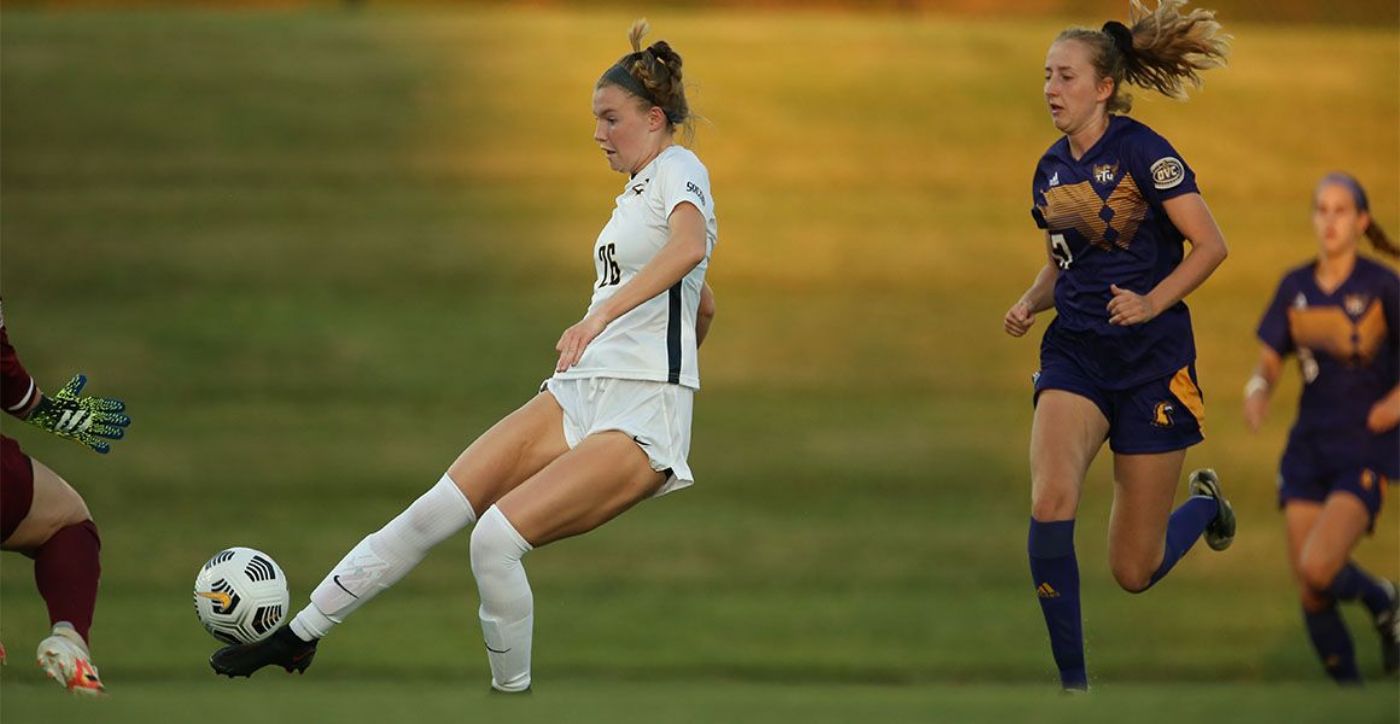 After her first-half penalty kick hit the crossbar in the 44th minute, Cook got another opportunity and took full advantage of the second chance. Following a Wofford yellow card right outside the box in the 77th minute, Cook stepped up and powered the free kick into the top right corner of goal, giving ETSU the 1-0 lead. The Blue and Gold kept the Terriers scoreless for the final 13 minutes and ETSU secured the 1-0 victory from Snyder Field in Spartanburg, S.C.

The Buccaneer win was just their second victory over the Terriers in Spartanburg with the first win coming on Oct. 14, 2004.

Freshman goalkeeper Shu Ohba (Fujisawa, Japan) earned her ninth start in as many games this season. She recorded her fifth shutout of the year, saving three shots and improving to 4-2-3.

Freshman midfielder Lindsey Cook was the lone goal scorer of the evening thanks to a free kick placed into the top right corner of goal in the 77th minute. Emma Arnold (Bristol, Tenn.) was taken down right outside the box, resulting in the Terrier yellow card and setting up the free kick. Cook placed it perfectly in the upper right-hand corner of the net for her first collegiate score.

The goal was the Bucs’ first goal since tying Lipscomb 1-1 back on Sept. 12, snapping a 473-minute scoreless drought.

Friday’s game got off to a quiet start as both teams combined for two shots in the opening 15 minutes. Wofford forward Megan Childress tried to set the tone early with a shot in the second minute, but sent the ball wide left of goal. ETSU then had the next scoring opportunity in the 14th minute when Andjela Kricak (Krusevac, Serbia) fired the shot towards the end line, missing wide left.

In game that featured three yellow cards, ETSU’s Raffaella Giuliano (Caserta, Italy) was booked for the first when she tripped up a Terrier attacker in the 29th minute. Sinoxolo Cesane (Capetown, South Africa) was given the Bucs’ second yellow in the 89th minute.

The Buccaneers had one final scoring chance in the half after a penalty kick was won in the 44th minute. Cook stepped up to take the kick but was unable to convert as her shot bounced off the crossbar and over goal.

The theme continued in the early stages of the second half for the Bucs, as Nele Bauer’s (Bammental, Germany) shot from 18 yards out in the 55th minute again hit the crossbar.

The Bucs controlled the tempo over the next 20 minutes, outshooting the Terriers 4-0, with a pair of shots coming on target. The Blue and Gold were finally rewarded when Cook found the back of the net and sent the Bucs into a celebration.

Wofford, who was held to only two shots in the second half, fired its final in the 81st minute, but Ohba was there for her third and final save of the night to secure the road win.

For the match, ETSU outshot Wofford 11-9, with four shots troubling the keeper … The Bucs dominated the second half out-shooting the Terriers, 7-2.

Cook recorded her sixth start in nine games and also recorded her first career goal for the Bucs … The Greeneville, Tenn. native became the fifth ETSU player to score a goal this season and the first since Raffaella Giuliano converted on a free kick in the 23rd minute at Lipscomb.

After missing the last three games, Pamela Penaloza (Bogota, Colombia) returned to the lineup as she made her sixth start of the campaign … Penaloza played 23 minutes in her first game back since Sept. 12.

The Bucs registered 12 fouls compared to the Terriers nine.

The Bucs remain on the road this Sunday as they travel to Greenville, South Carolina to take on Furman. Kickoff is scheduled for 2 p.m.