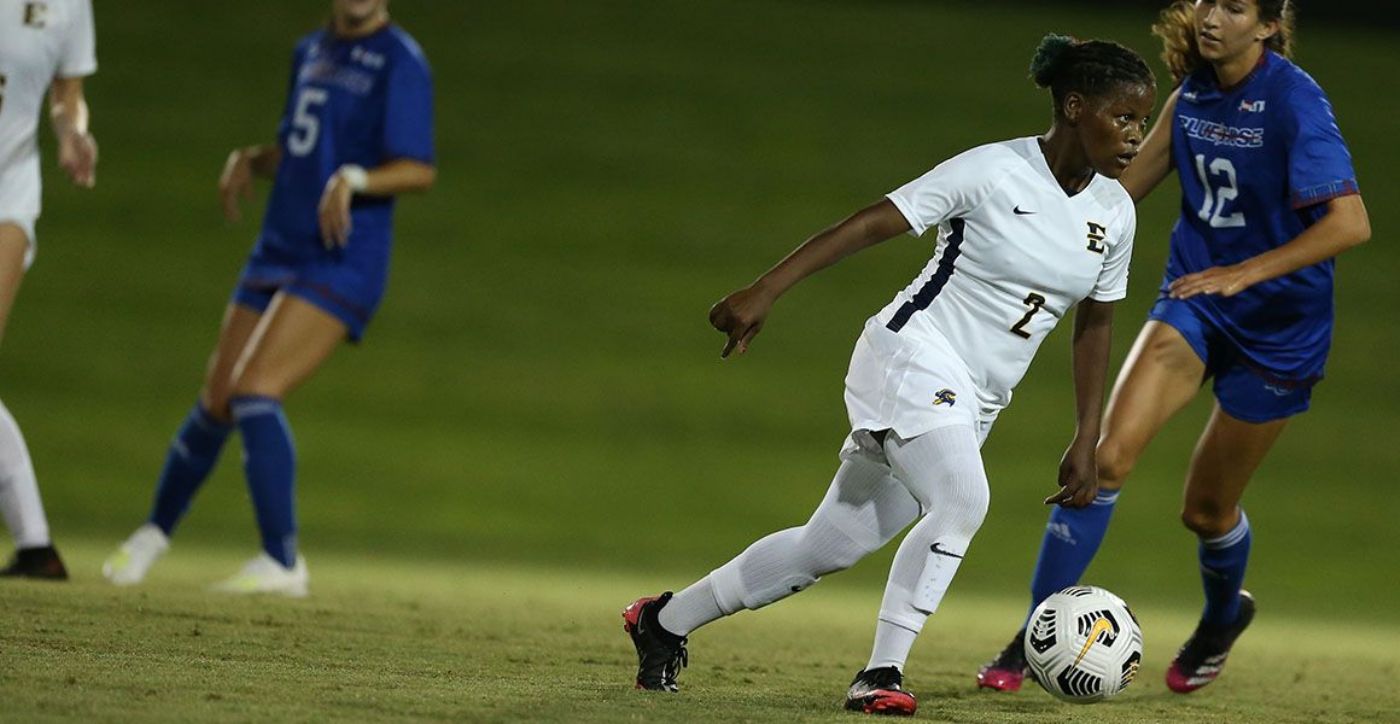 The game of firsts featured:

It was a critical win for the Bucs as they entered the match in ninth-place in the SoCon standings, but ETSU could move up to as high as fourth win a victory in its regular season finale Sunday at VMI. A Buccaneer win coupled with Furman (at The Citadel) and Samford (vs. Chattanooga) wins, along with either a Wofford (at Mercer) win or tie, means the Blue and Gold secure the No. 4 seed in next week’s conference tournament.

The freshman phenom goalkeeper, Shu Ohba (Fujisawa, Japan) started in goal for the Bucs, giving her 14 starts in as many games.

The Buccaneers opened scoring in the 25th minute with a header from Nehls. With Lindsey Cook (Greeneville, Tenn.) taking the corner, the Buccaneer freshman sent a beautiful ball into the box with Nehls leaping out of mid-air to head one in for her second goal in the last four matches.

After taking a 1-0 lead into halftime, ETSU added to its lead in the 57th minute. The goal was set up when Emma Arnold (Bristol, Tenn.) was fouled outside of the box, giving Cook the free kick. Cook’s laser shot tested the UNCG keeper, but she couldn’t control the ball, and Cesane was there to fire in her first collegiate score.

UNCG got on the board with a controversial goal in the 75th minute. The Spartans were given a penalty kick after Ellie Cornell (Knoxville, Tenn.) was tagged with a yellow card in the box, allowing Kayla Campbell to step up and take the shot. Ohba made an outstanding save on the penalty kick with her left leg and looked to have secured the ball with her arm; however, Campbell knocked the ball out of the Buccaneer keeper’s arm, giving Maddy Gilhool the opportunity to tap one in, making it a 2-1 score. The officials huddled together to determine if Ohba had full control of the ball off the penalty kick and eventually awarded UNCG the goal.

The Spartans threatened late when Parker Sikora fired one at the cage in the 84th minute and the ball hit off the crossbar, but with a UNCG player in the box, she missed on the second-chance effort and Ohba was able to corral the loose ball. A minute later, Ohba stepped up with another key save on a shot from Caroline Woods, while UNCG’s final shot in the 89th was off the mark and ETSU held on for the big road victory.

Both teams had seven shots a piece heading into halftime, while UNCG won the battle in shots for the night, 19-14. Friday snapped a four-game stretch where ETSU was held below double-digit shots as the last time the Bucs had 10-plus shots was in the 1-0 win at Wofford on Oct. 1.

Both keepers made six saves each on the night, while the teams each took three corner kicks.

The Bucs were plus-6 in fouls, 14-8, while Katie Philips (Tega Cay, South Carolina), Cesane, and Nehls were all handed yellow cards during the match.

The Buccaneers stay on the road this Sunday as they travel to Lexington, Virginia to take on VMI for their final matchup of the season. The matchup is slated for 2 p.m. kickoff.

For more information on Buccaneer Women’s Soccer, visit ETSUBucs.com and click on the women’s soccer page.