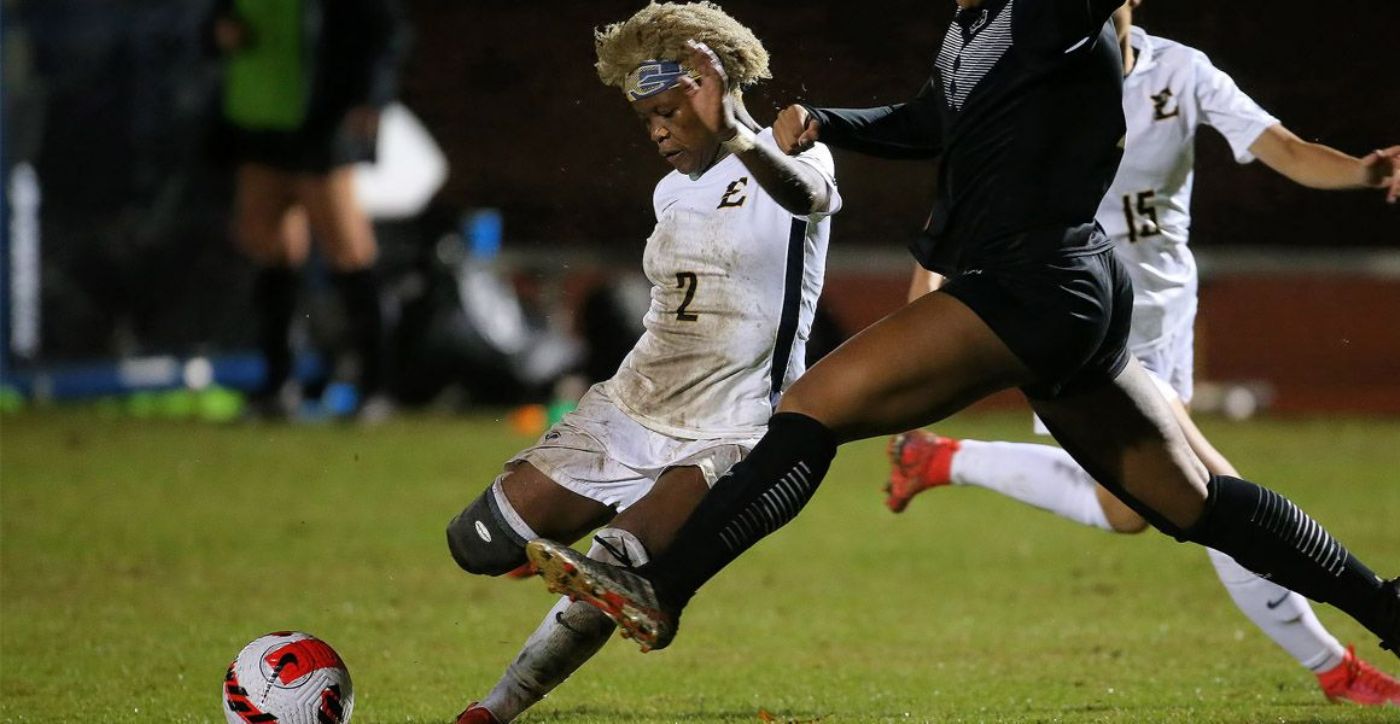 BIRMINGHAM, Ala. (Oct. 29, 2021) – It wasn’t the result ETSU women’s soccer wanted, but the Buccaneers still have a lot to be proud about.

After picking up back-to-back road wins last weekend to earn the No. 4 seed in the Southern Conference Tournament, the Bucs suffered a 2-0 season-ending loss to fifth-seeded Mercer in Friday’s quarterfinal match from a cold, windy, soggy Shauna Yelton Field in Birmingham.

ETSU saw its season come to an end with Bucs finishing with an overall record of 7-6-3, marking their first winning season since 2016. The Blue and Gold also won five road matches this year, tying the single-season school record.

Mercer improved to 7-5-5 and advanced to Sunday’s semifinal match against top-seeded Samford.

Mercer struck for goals in the early stages of both halves to secure the win.

In the first half, Kendall Cook scored in the 10th minute when Kylie Buchanan sent a cross over to her teammate for the first goal of the match.

After taking a 1-0 lead into halftime, the Bears added to their lead three minutes into the second half as ETSU had trouble clearing the ball out following a Mercer corner kick. The Bears sent the corner kick into the box, and after their first shot was high, which gave Shu Ohba (Fujisawa, Japan) some troubles, Mercer gained the ball off the rebound and Payton Shurr fired one in through the near left post, making it a 2-0 score.

ETSU edged Mercer in shots, 11-10, with the Bucs putting five on goal; however, Mercer’s Jordyn Ebert recorded her seventh shutout of the season.

Brown’s look came just shortly after Mercer’s first goal but Ebert was able to stop it from going into the top right corner of the cage, while Philips opportunity came in the 35th minute. Philips got the ball near midfield and sprinted to the left of the 18-yard box where her laser shot tested Ebert but she made a sliding save to keep ETSU off the board.

The Bucs put a couple of shots on goal in the second stanza but could never break through.

The teams combined for 31 fouls with Mercer being whistled for 18. The Bears also held the upper hand in corner kicks, 4-1.

Shu Ohba, the SoCon Freshman of the Year and first team all-SoCon selection, finished with one save. Ohba allowed just 14 goals on the season, tying for the seventh-fewest in single-season history, while her seven shutouts this year were a new program record.

As a team, ETSU’s 14 goals allowed were the fewest in single-season program history.

Nine of the Bucs’ 11 starters tonight were underclassmen – five freshman and four sophomores – while the other two were juniors.

ETSU was picked to finish ninth in the preseason coaches poll and posted a fourth-place finish after going 4-4-1 in league play.