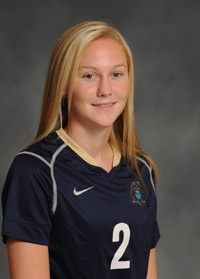 2011: Had a breakout junior season, playing and starting in all 18 games… ranked third on the team in goals (4), points (13), shots (35) and shots on goal (17), while leading the Lady Bucs with five assists… logged 1,280 minutes of playing time… scored her first collegiate goal, finding the back of the net in the 67th minute of the season opener against Wofford (Aug. 19)… assisted Jenna Caudle in the 29th minute to equalize the match in the home opener against Tennessee Tech (Aug. 26)… tallied her second assist of the season, finding Genna Petersen with the game-winning goal as ETSU defeated Wright State 2-1 in the RedHawk Shootout (Sept. 9)… took two shots and notched her first point in A-Sun action with an assist in a 4-0 defeat of USC Upstate (Sept. 23)… fired a career-high five shots, three on goal, in a 3-0 win against UNC Asheville (Sept. 25)… netted the game-winning goal in the 79th minute to help ETSU take down North Florida 2-1 (Oct. 7)… posted her first career three-point game, assisting the Lady Bucs’ second goal and scoring in the 81st minute of a 3-0 shutout of Jacksonville (Oct. 9)… had another three-point game in the very next match, tallying an assist in the 55th minute and scoring in the 67th minute as ETSU beat Stetson 6-3 (Oct. 14)… had her second five-shot game of the year, putting two shots on goal, in a 1-1 draw against Kennesaw State (Oct. 21)… took one shot and played 89 minutes in her first Atlantic Sun semifinal appearance (Nov. 4)… earned A-Sun All-Academic honors.

2010: Played and started in all 18 games for the Bucs … combined for two shots, one on goal … led a defense that allowed just 1.06 goals per game … fired two shots, one on goal, as part of a, 2-1, victory over Winthrop (Sep. 12) … received All-Academic honors from the Atlantic Sun Conference.

2009: Started in all 18 games ... recorded an assist and one point on the year ... hooked up with Jordan Monty for the first ETSU goal of the season against Western Carolina on Aug. 28 ... took two shots with one coming on goal ... earned Atlantic Sun All-Academic honors.

Prior to ETSU: Was a basketball star at Heritage High School… played club soccer for head coach Paulo Neto and the ‘91 Premier Nike Impact USA, in addition to being on the Olympic Development Program under coaches Curtis Blair, Hans Hobson and Tori Beeler Watson… led the Impact to the 2008 Redbout Generals Invitational title and a second-place finish at the 2008 Tennessee State Cup… also led the Nike squad to a quarterfinal berth at the 2006 Orange Classic… on the hardwood was named to the 2008 Region 2 District 4 3AAA All-Tournament team, earning All-Blount County honors and the team’s Hustle award… led HHS to a 27-6 record and a 2008 District 4-AAA Championship, after leading the Lady Mountaineers to a 27-7 record and 2007 Super 16 Championship… off the field Thomas graduated with 3.92 GPA, in addition to volunteering for both the Special Olympics and local AAU teams… won the prestigious 2005 and 2007 Student of Distinction Award.