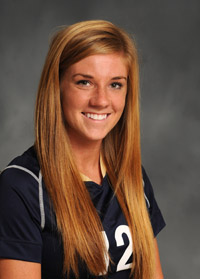 2011: Played and started in all 18 games, totaling 1,518 minutes of playing time… had a remarkable senior season, leading the team in goals (11), assists (5) and points (27)… ranks second in the ETSU record books for goals in a single season, and ranks fourth in points… was second on the team in both shots (45) and shots on goal (26)… scored her first two goals and registered her first assist of the season with a five-point game in ETSU’s 10-0 blowout of Alabama A&M (Sept. 4)… netted the game-winning goal with a blast in the 62nd minute to help defeat Wright State 2-1 in the RedHawk Shootout (Sept. 9)… posted a multi-assist game, finding Jenna Caudle with the first goal and Taylor Maxson with the third in ETSU’s 4-0 defeat of USC Upstate (Sept. 23)… put together her second multi-goal game of the year with two scores in a 3-0 shutout of UNC Asheville (Sept. 25)… completed a second half ETSU comeback with the game-winning goal in the 60th minute as the Lady Bucs beat Lipscomb 2-1 (Sept. 30)… assisted Caudle’s equalizer in the 52nd minute as part of another 2-1 comeback victory against Belmont (Oct. 2)… found the back of the net in the 10th minute to lead ETSU past North Florida 2-1 (Oct. 7)… had yet another multi-goal game, scoring in the 64th and 68th minutes as ETSU defeated Jacksonville 3-0 (Oct. 9)… added to her point total with a goal and an assist as the Lady Bucs scored six times to blow by Stetson 6-3 (Oct. 14)… took a career-high seven shots, and scored her 11th goal of the season in a 1-1 draw against Kennesaw State (Oct. 21)… became the first ETSU women’s soccer player to be named Atlantic Sun Player of the Year… earned First Team All-Atlantic Sun honors… named to the Academic All-Atlantic Sun Team… received A-Sun All-Academic honors.

2010: Played in all but one game, 17, while getting the start in 13 ... ranked second on the team with three assists to combine for three points on the year … took 11 shots, three on goal … took two shots and found Ramey Kerns in the 88' minute to tally her first assist of the year at UNC Asheville (Aug. 22) … pelted a season-high three shots, one on goal, in a, 2-0, victory over King (Sep. 2)  … assisted the game-winning goal, finding Terri Miller with a cross in the 104' minute, to beat Winthrop 2-1 in double-overtime (Sep. 12) … fired a shot and played a through ball to Terri Miller to assist the go-ahead goal in the 81' minute against Belmont (Sep. 26) … received Atlantic Sun All-Academic honors.

2009: Started in all 18 games for the Bucs ... netted one goal and was second on the team with two assists ... was third on the team with 16 shots with five coming on net ... scored only goal of the year against USC Upstate on Oct. 12 ... hooked up with Terri Miller for the game-winning goal against Radford on Sept. 4 and Kennesaw State on Oct. 18 ... was named to the Atlantic Sun All-Academic team.

2008: Saw action in 18 matches, starting 14… Petersen was third on the team in goals (2) and fourth in assists (1) and points (5)… quickly made an impact offensively, scoring her first collegiate goal in the Bucs second match of the season, as ETSU defeated Morehead State 2-1, Aug. 31… gave the Bucs a quick 1-0 lead, scoring off a long pass from teammate Jessica Hiltenbrand and Terri Miller, at Kennesaw State, Oct. 17.

Prior to ETSU: Four-year starter and letterwinner at Loveland HS under coach Todd Kelly… led Loveland HS to a district title in 2007... was a three-time First-Team All-FAVC selection… also named to the All-FAVC Academic team in 2004 and 2007, in addition to earning the All-Southwest Ohio Academic Honor Roll in 2004… played club soccer for the Ohio Elite coached by Tim Lesiak… older brother Zak and older sister Jessica both played soccer at Maryville College.

Personal: Born on Aug. 18, 1990… majoring in sport and leisure management… daughter of Tim and Debi Petersen.