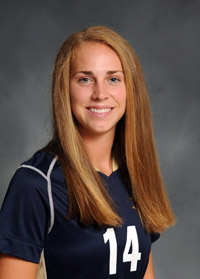 2011: Played in all 18 games, earning the start in 14… scored three goals and registered three assists to collect nine points… ranked third on the team with 35 shots, putting 15 shots on goal… logged 1,030 minutes of playing time… took a career-high six shots, three on goal, while scoring her first goal and tallying her first assist of the season in ETSU’s 10-0 shutout of Alabama A&M (Sept. 4)… tied her high for shots in a single game, firing six on the road against Winthrop (Sept. 17)… sprayed four shots, two on goal, in the A-Sun opening 4-0 win against USC Upstate (Sept 23)… assisted Taylor Maxson’s equalizing goal in the 56th minute of a 2-1 win against Lipscomb (Sept. 30)… netted the game-winning goal in the 87th minute of a 2-1 comeback against Belmont (Oct. 2)… assisted Genna Petersen’s goal in the 10th minute of a 2-1 win against North Florida (Oct. 7)… scored the game-winning goal in the 81st minute of the regular season finale against Mercer, lifting ETSU to its first share of a regular season A-Sun Championship (Oct. 23)… named Atlantic Sun Player of the Week (Oct. 24)… received A-Sun All-Academic honors.

2010: Played in all 18 games, starting in eight … tied for the team lead in goals (6) and points (13) … ranked fourth on the team in shots (29) while ranking third in shots on goal (13) … led all freshmen in goals, points, shots and shots on goal … put together nine multi-shot games … came in off the bench to score her first collegiate goal, in her first game, as part of a, 4-1, victory over UNC Asheville (Aug. 22) … took three shots, one on goal, while heading in her second career goal to help beat Tennessee Wesleyan, 4-0 (Aug. 30) … took one shot and found Kayla White for the game winning assist in the 31' minute to tally her first collegiate assist … found the back of the net from 37 yards out, just 14 seconds into the second half, at Francis Marion (Sep. 5) … fired two shots in her first collegiate start against Temple (Sep. 10) … peppered the net with a career-high five shots, one on goal, as ETSU defeated Winthrop, 2-1 (Sep. 12) ... had her first multi-goal game, in her first Atlantic Sun contest, scoring two goals on three shots to defeat Campbell, 2-0 (Sep. 18) … netted her sixth goal on the year to help the Bucs defeat Stetson, 2-1 (Oct. 10) … received All-Academic team honors from the Atlantic Sun.

Prior to ETSU: A four-year letterwinner under the guidance of coach Dan Potter at Kings Mountain High School… was an all-region forward from 2006-09… was awarded the offensive MVP of the 2007 Gaston Gazette Cup… was a three-time all-state selection from 2007-09… was named the Southwestern Conference AA/AAA Player of the Year in 2007 and 2008… earned all-west state team honors in 2007 and 2008… was a member of the All-Charlotte Observer Team in 2007 and 2008… in 2008, Kerns was named the Western Region Player of the Year… as a member of the Mountaineers, Kerns and Kings Mountain were Southwestern Conference Champions all four years, and were Western Region champions three straight seasons from 2006-2008… Kings Mountain finished as the NCHSAA AA/AAA State Runner-up in 2008… as part of Kings Mountain 2008 team, Kerns helped the Mountaineers to a school-record 50 goals and 30 assists… played club soccer for Ion Dennis and the U-18 Charlotte Untied Futbol Club… finished the club season as the ’91 Gold Premier North Carolina State Runner-up in 2008.