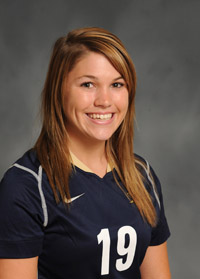 2009: Played in four games on the season ... did not record a shot ... was named to the Atlantic Sun All-Academic team.

Prior to ETSU: Was a four-year letterwinner and team captain for Nease High School under head coach Marc Osterberger… led the Panthers to a Class 4A State Championship in 2008 as NHS posted a 19-2-6 record… played club soccer for the Jacksonville Jaguars Soccer Club… earned a TV segment dedicated to her soccer career on Florida’s Sunshine Network… graduated with a 3.6 GPA… spent time volunteering in various clubs such as Fellowship of Christian Athletes, National Honor Society… comes from an athletic background… granddaughter of Hall of Fame NFL Broadcaster Pat Summerall, who played 10 years in the NFL for the New York Giants after a successful collegiate career at Arkansas… other grandfather played basketball at Florida, while father played tennis at Rollins. . . earned ETSU’s Public Performance Scholarship in Broadcasting.

Personal: Born on Dec 31, 1990… majoring in broadcasting… daughter of Kyle and Dana Summerall.